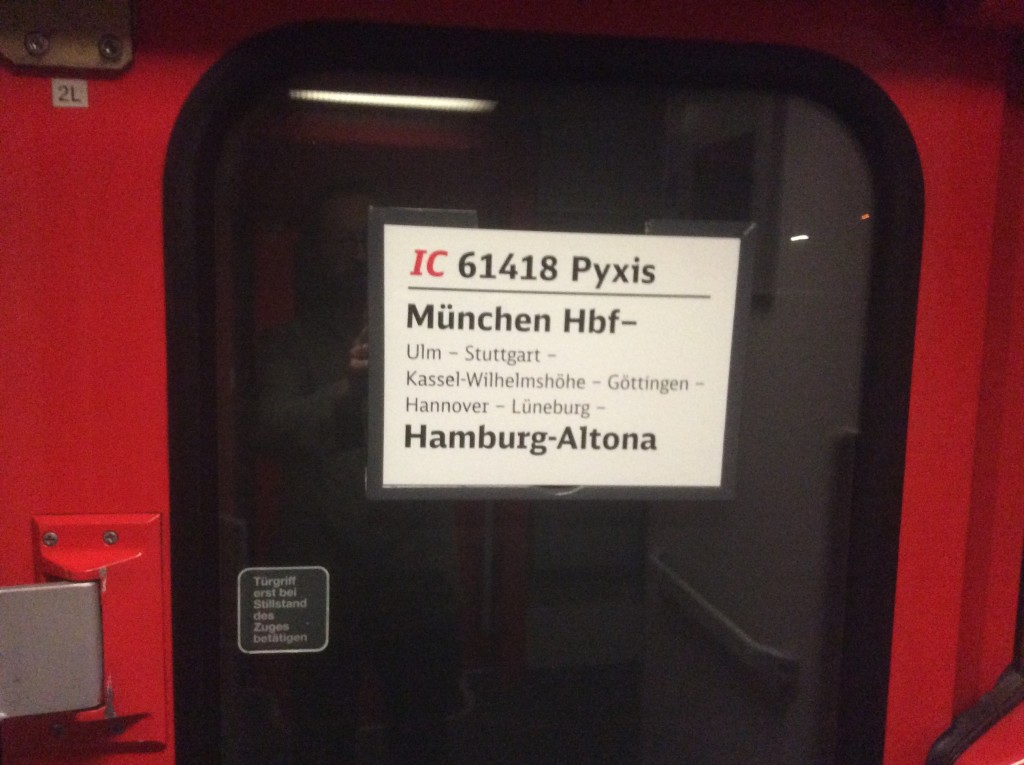 I was irritable today. Partly through tiredness. Partly through being a little worried about the long night ahead of me. Partly from people being irritating. The trains to Stuttgart were extremely full. People on full trains who leave their bags and jackets on empty seats and adopt philosophical poses whilst staring out the window pretending they don’t notice that others are uncomfortable, burdened and standing….. these people inspire the worst in me. And on the last leg of the journey to Stuttgart today, the only thing that stopped me from being a crazy yelling person on a quiet train was my lacking the German vocabulary to do it with sufficient venom. Like I said, a bit cranky today.

Tonight I am playing an early gig in Stuttgart. I’m looking forward to seeing Olli and Terry and hopefully a few more heads from the last gig. I’m not looking forward to taking a night train on my own with a wad of cash in my pocket.

The gig last night was definitely the most bar-ish gig of the tour. Still it was a nice bar, the owners and staff were sound, and, while the gig was background, people were still responsive and I really had a good time. I am very grateful to Olli for finding it for me. Afterwards I played ‘Lakes Of Ponchartrain’ with the session and that was really fun. 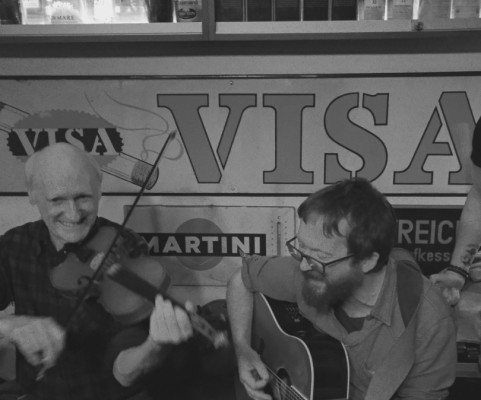 The old owner–old, only as in he used to own it and now just works a couple of shifts–was a character from Glasgow called Bernie. Fierce nice fella, and this was the first time I heard German with a Glaswegian accent. Because Bernie is from Glasgow, and perhaps the last person from there that I have not told my Packie Bonner story to, I told him my Packie Bonner story.

On  the off chance I haven’t already told you it, I will now. When I was 11, Packie Bonner played in goal for Ireland and Glasgow Celtic. He was my hero. I wrote him a letter telling him as much. You don’t get a lot of post when you are 11. Imagine my excitement when I came home from school to see that there was a letter for me. With a Glasgow stamp on it. A handwritten envelope, with a handwritten note and a signed photograph from Packie Bonner. I still can’t believe it.

A writer friend of mine, JP O’ Malley met him recently at an event in London and told him this story. By all accounts he was delighted to hear it.

Bernie too, is happy to hear it. Ireland had one of their greatest victories, one of the greatest moments in Irish sport really, in Euro 88 in Germany. It was Ireland’s first time qualifying for any major tournament. I remember during Mexico 86 being shocked when I asked my father how many world cups Ireland had won and he told me we had never even qualified. So, anyway, 1988, Ireland qualified for the European championships. The first game was against England. Nobody gave us a chance. Ray Houghton was born in Glasgow, but by the grace of God and an Irish granny, he as eligible to wear the number 8 shirt. Well, six minutes into the game, Ray Houghton scored the goal that brought the happiest moment to many an Irish person’s life. I can still see him celebrating, hear my father screaming with joy, feel my spine tingle. Ireland, in their first ever game in the finals of a competition were beating England 1-0 after six minutes. Take that Cromwell! For the next 86 minutes, Packie Bonner, won that game for Ireland. Ray Houghton from Glasgow, Packie Bonner who played in Glasgow, winning the game for Ireland, in Stuttgart.

Decades later, here I am telling my Packie Bonner story to a Glaswegian bar owner in Stuttgart. Well, doesn’t his face light up, Packie being a friend of a friend. He recounts them seeing the team bus go by and so many German fans siding with Ireland, the competition’s biggest underdog.

He also said he didn’t open the bar for that game. As there was still a football hooligan element amongst the English fans. I hadn’t really thought about how much of a problem it must have been on a practical level for business owners. For a Scottish guy to close his bar when Ireland and England were playing and there were tens of thousands of fans in town gives a good indication. So anyway, Bernie, says he came into the closed bar and watched it by himself, screaming and running around the bar, hoping we’d hold onto the victory. Which, I will remind you, we did.

I had a feed of pints with him and Olli, Terry, Sarah and Jose and then deposited myself on the night train to Berlin via Hannover. Having applied the correct dosage of pintage I slept enough and not too much on the train. It was truthfully fine. I got to Berlin in something resembling reasonable shape. 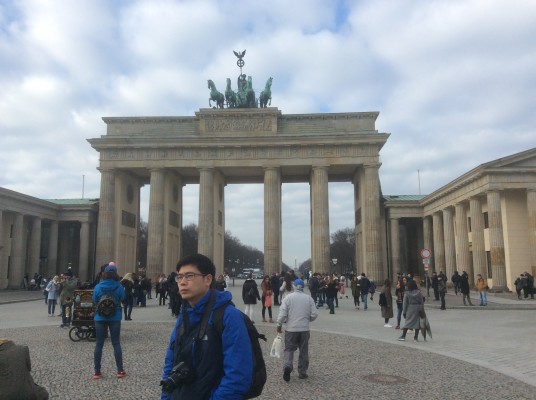 This morning I rose early to meet Clare at the airport. The countdown is complete. Being away from my wife is the single hardest thing about touring. Nothing else comes remotely close.

I arrived in Berlin a day ahead of her. I was a full six hours too early for check in and despite my efforts at charm, cohersion and persuasion, not much could be done to accommodate me. Again, Berlin, not the worst place to have to kill time. The hotel was a very short walk from the Brandenburg Gate. ( It would have been shorter still if I had walked over the bridge the hotel clerk had, in retrospect, been pointing to, and not the one next to it.) Like Paris, Amsterdam and Gent, in Berlin history is unavoidable. The past is part of the present. A tremendous omnipresent horrific shadow. 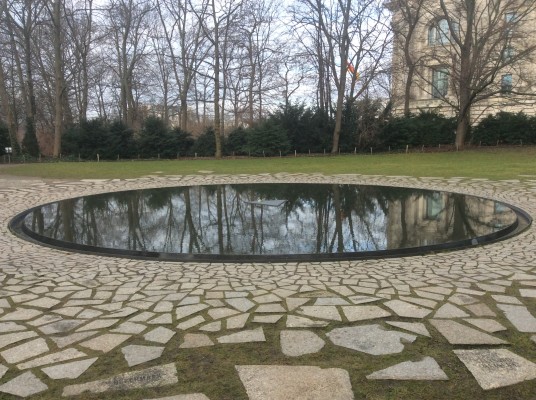 Blackwater memorial to Sinti and Roma killed by National Socialists.

The horrors that took place are well documented by those more scholarly than this writer. The details of the Holocaust. The details themselves are appalling. The numbers. Of real people, with names and families. Exterminated with the same callous attention to detail as pest control expert. The thought that went into the process, the systematic attempt to exterminate, Jews, “Gypsies” and homosexuals is and must be, sickening. Everywhere in Berlin there are reminders of this. Spending sometime at the Denkmal Für Zigeuner ( Memorial for gypsies). I walked slowly onward towards Checkpoint Charlie.

On my way I stopped in Cafe Einstein for a soup. The least I could do to honour the proving of his Gravitational Waves Theory. I was informed the soup of the day was “Chicken pea”. “Chicken Pee?! “ I am hoping he meant Chickpea. Either way, I can recommend it.

Checkpoint Charlie and the various memorials to the wall and the formerly divided city, country and continent  also provides a very sobering and moving experience. I spent about an hour in small and informative Black Box museum. The museum does a great job of putting it all in historical context. The Iron Curtain, the Cuban missile crisis, The Prague Spring, USSR and US supporting opposing sides from Afghanistan to Angola. I am interested in History but haven’t studied it sufficiently. In the context of present day Syria and frosty US Russian relations now, again it feels like the past is never fully behind us. 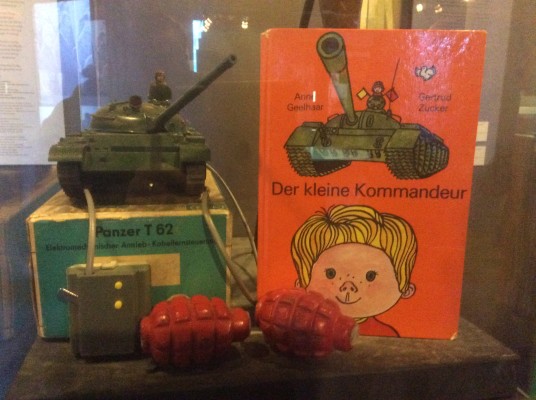 Eventually I wandered back to the hotel. Did some laundry had a failed nap and headed out to the gig. Fuck sake, in I walk in my spotless, fresh scented clothes only to immediately note that smoking is still permitted at the venue. It seems like a good spot though. A winnable room. The excellent songwriter Wallis Bird came down to see me and it was good to catch up with her. She and I played together in NYC a few years ago. Also, John Collins’ friend and bandmate Eoin and a friend of Olli’s called Urban. I always appreciate when people send friends and friends of friends to the faraway gigs.

I got back reasonably early sat at the bar while drying the rest of my clothes. In a country as efficient as Germany I seem to have found the world’s slowest tumble dryer. About 10 teenagers arrived at the hotel bar then. They were drinking with incredible speed, quantity and variety. Clearly still armed with the notion of invincibility that takes most teenagers a while to lose. Didn’t I feel comparatively old and wise beside them? Waiting for my clothes to dry. Rock and Roll.

Do you have photos from the tour? Please #NiallOnTour