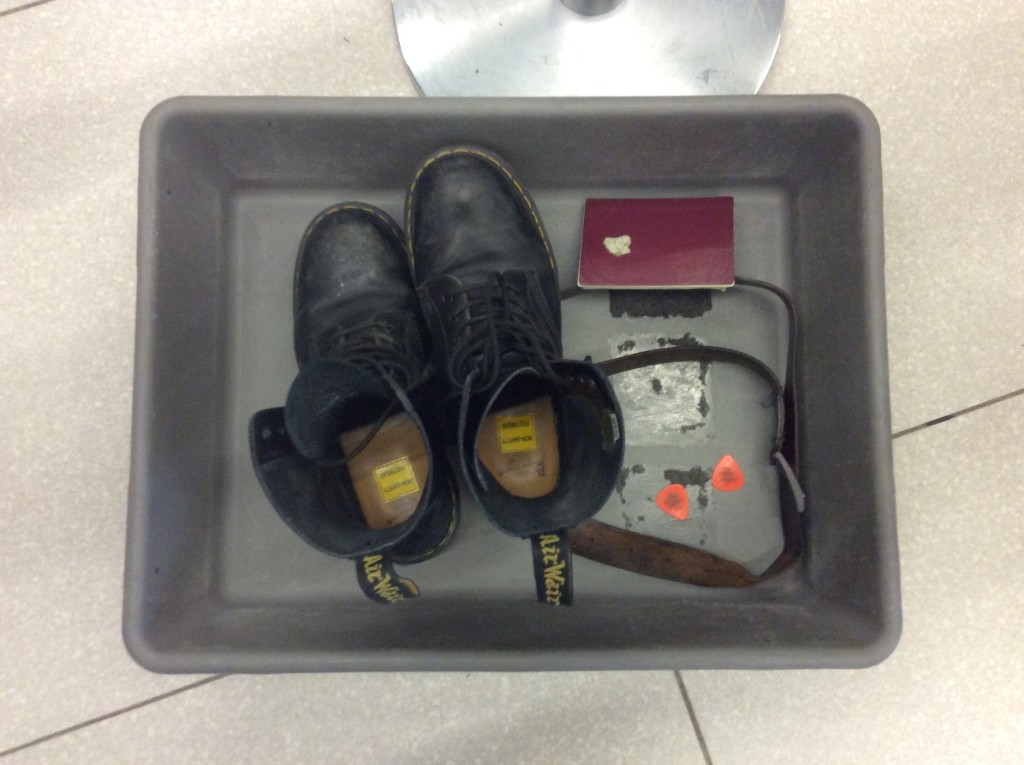 After a bleak enough delay at the Eastern Czech town of Přerov’s train station, we arrived into rainy Vienna’s Hauptbahnhof about forty minutes later than expected. One friendly taxi ride later, we checked in at Hotel Am Brillantengrund. This was Neil’s recommendation. I would pass on that tip. It was reasonably priced, clean, artsy and in a good location in Vienna’s district 7. The managing director Marvin, a Filipino Austrian, was extremely helpful and friendly. He even offered to accommodate me free of charge next time in exchange for an acoustic session in the Hotel bar.

Before heading to my gig we wandered around the market area, fantasizing about smuggling back a huge wheel or two of cheese. We ate an incredibly good spinach and feta borek from a Middle Eastern fast food truck. At 1 euro 80, it ranks amongst the best of the delicious cheap food I have had on this tour. Some of the Turkish Pizzas from the German leg keeping it company at the top of my ‘There’s No Excuse to Be a Starving Artist’ list. 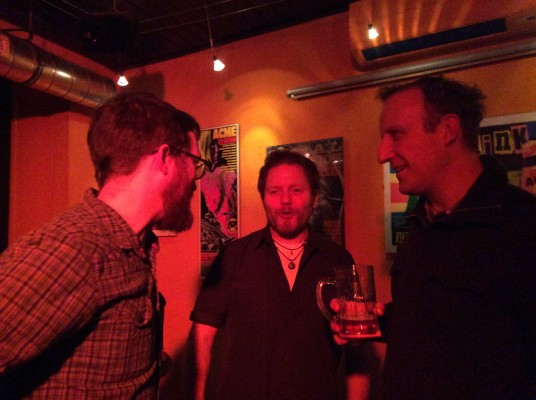 Myself and Shane and Neil after Jetzt gig in Vienna.

Wednesday’s gig was curated by Tallaght born Shane O Fearghail who runs a great series of songwriter nights in Vienna. It was at Jetzt bar. It was comforting to see a poster for the Mekons on the stage. Jon Langford from the Mekons twice told me that he paints to my music. I count that amongst my tangential claims to fame (albeit fame by association). And their drummer, Steve Goulding, filled in for us in New York recently when Brandon was on ‘about to become a father’ leave.

Shane has a real community of friendly songwriters, not dissimilar to Big City Folk in NY. It was great to meet so many new and interesting people in one night. It reminded me to try not to be jaded in New York. To realise and appreciate the great wealth of talented friends I have made through music. To be open to making more.

A very young Austrian singer Maria Burger, opened the gig. She has a great voice and a lovely Furch guitar (same make as the guitar that was stolen from me in NYC’s Lower East Side in 2010).

The gig was pin drop quiet and I loved it. Neil McCarthy arrived towards the end and I more or less bullied him into joining me for a few poems. A really beautiful night. Thank you Shane. 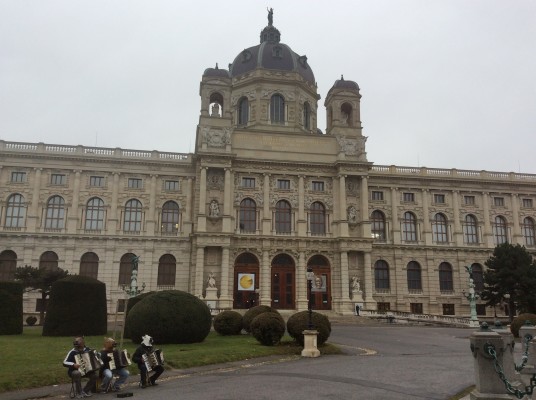 The next day myself and Clare were tourists. We wandered round the Museum district. The Kunsthistorisches Museum is without doubt the grandest building I have been in. We saw some Caravaggio, Klimt and pile of ancient coins. It was the building itself that impressed me the most. The nearby Leopold museum houses the world’s largest Egon Schiele collection. I was only vaguely familiar with some of his work but I really enjoyed this exhibit. In his 28 year life he created some great work and from the information I gleaned from the museum walls, quite the biography too. 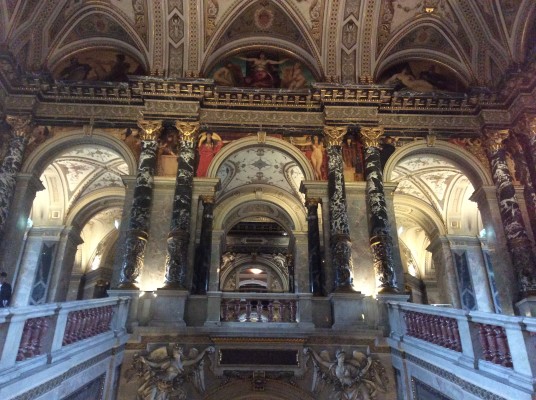 We went and met with Neil and Jeanette and their little baby girl for coffee. Neil is such a crucial part of my career, it was great to meet his daughter for the first time. Their accounts of the health care and the support system the Austrian government affords parents would make any parent in USA weep. And maybe even take Bernie Sanders a little more seriously for a moment. Maybe.

I first met Neil over 10 years ago when he wrote me a very formal booking request for a gig in Nun’s Island Theatre in Galway. I said grand. He sold it out for me. Since then we have performed music and poetry together from LA to Romania. We once hitch hiked a train together in Poland. We did the weird and truly wonderful Folk Circus in Bushwick Brooklyn together with dancers and acrobats in the background.

The Voice and Verse in Transylvania

Another time in Cluj Napoca, Romania, our set was interrupted by Hungarian separatists asking, “What do you think of the IRA?”, I replied, “I am happy to say in these peaceful times they are no longer relevant”, to which our Hungarian skinhead friend replied “ And you consider yourself an Irish man talking like that?” I said, “Yes, I do.” Long story longer, things got very tense, very quickly. Remember, this was all taking place during a gig. Neil, balls of steel, McCarthy, walked off stage to their table and recited a poem from there. David Rynhart and Stephen Murray were there too. On a recent trip to NYC David and I recalled that this was the only gig for both of us, where we were physically afraid for our well being. They kept interrupting, we kept going. Eventually, I asked the audience, “Okay, who wants us to keep going and who wants us to stop?” We got a standing ovation. We kept going. We finished with ‘Skin and Bones”, with the entire audience,(except the Hungarian Separatists) singing along. All the while eyeing the exits, we sang our way off stage, and out the gap.

Later that night someone told David that they liked his hat. He gave it to them. That’s David in a nutshell. We stayed in Hotel Transylvania before it was a children’s movie.

Neil makes things happen. The man would find a job on the moon. And two days later would be booking gigs there. It is little surprise then, that that Alan from Irish Embassy attends my second gig in Vienna and tells me that Neil was a great person for him to meet because he already has such a foothold in the city.

We met up with Karl and Blaithin for dinner before the gig. Karl and I have been playing music together on and off since 2000. By wonderful coincidence he and Blaithin were in Vienna the same time as us. I kept interrupting us to exclaim my excitement and delight at their presence. After dinner I sound checked at the Laden and we headed back into the wet night to find somewhere else to pass the time. Sometimes I get very edgy hanging around the venue before a gig and it is generally helpful to go away and come back.

Passing by a building we heard some choral singing, and stepped out of the rain into a basement. We were all a little unsure as to whether the place was open to the public or whether we might be interrupting a private event. When we got downstairs we were greeted by and extremely chatty and hilarious waiter who bore an uncanny resemblance to Mr. Bean. He decided Clare was Katy Perry. And asked if she was my daughter, adding, “I don’t know, everytime he comes here with a different woman.” It was most certainly my first time here.

A cellar bar and restaurant with flags hanging from the ceiling complete with taxidermy boar and deer heads on the walls, it was essentially, exactly what we wanted. Our waiter told us the Irish football team were there recently. And that they were very loud singers. Seemingly the monks upstairs (the source of the previously mentioned choral music) were very confused by the cacophony from the cellar below. I don’t know if this is a true story but it’s a good one. He gifted us little samples of pheasant soup which was sweet, creamy and every bit as strange as our surroundings.

So, having gotten our Twin Peaks moment out of the way we crossed the road for the gig.

Thou Shalt Not Applaud

Shane did a twenty minute set to kick things off. He’s a great singer and really did an excellent job of warming the audience up. A good opening act should make it easier for the next act and after Shane’s set I knew it was a great audience.  I felt very inspired/ pressured to do my very best.

The venue, Verein 08/the Laden is one of the more bizarre places that I regularly play. I have played there at least 4 or 5 times, and I always almost walk by it. It has no sign. No real indication from the outside as to what magical secrets are stored inside. Dominik, who owns the place and curates the concerts, is a real affable eccentric. His introductions are notoriously long, abstract and hilarious. Tonight is no exception. The venue is also unique in my experience as the only place in where clapping is expressly forbidden after 10.30pm, out of consideration for an elderly music loving upstairs neighbour. With the music alone, sans applause breaks, she can happily drift off to sleep. It remains surreal to finish a song and be met with silence and the sight of several dozen people crammed into a small space waving their hands.

Tim Nugenthead and Emily Kolbert (nee Joffee) were also there. Emily who used to work at the Path, recently married an Austrian and moved to Vienna. Tim had driven from Budapest. Again, I love it when these musical worlds collide. 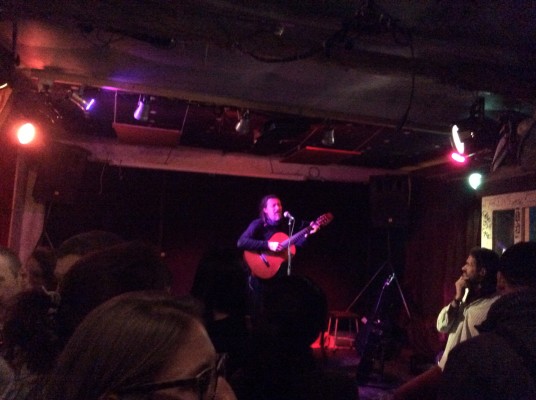 A blurry photo of Tim Nugenthead singing in Szimpla, Budapest

The next morning Tim drove us to Budapest. He had so many great stories that the 3-hour journey seemed to last about a half an hour. The man has already crammed several lifetimes into his time on this planet. Driving over the Danube, the views of the city were spectacular and both myself and Clare were sorry we only had one day in Budapest. We checked in and immediately set off for the baths. If you ever have the chance to go to Széchenyi baths in Budapest, go. I had been once before when I was with the Voice and Verse. This time in mid February, it was especially intense to go from the chilly February air into the 38 degree Celsius outdoor pool. We did the sauna followed by ice cold water dip a couple of times. If you ever have the chance, go.

The gig itself was noisy but I enjoyed it. Dan (formerly of Tree Hugger Dan’s) had driven from Szalonna for the gig. He’s a really nice guy. I have a lot of happy memories of playing his bookstore/bar/cafe on previous trips. It was really great to see him. 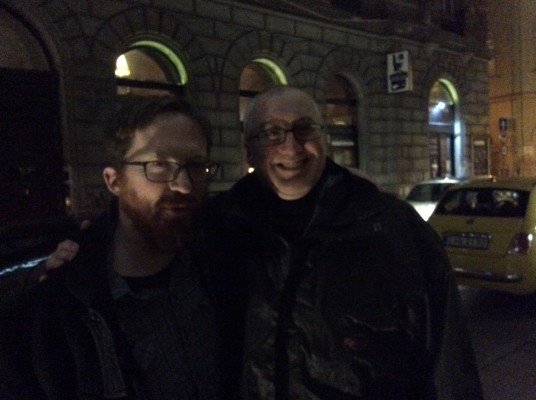 Myself and Dan Swartz in Budapest

Noel from Poster Boy came out too. I’ve met Noel a few times in NYC. He has a mad Glaswegian accent which is great to hear coming out of a Hungarian. After the gig we headed to Szimpla, a really great and odd bar. Tim was scheduled to play a few songs at the open mic. I enjoyed hearing him play again and sang a couple myself later on. 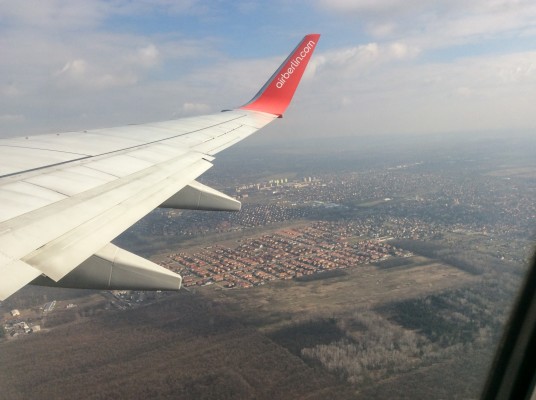 Goodbye and thank you, Budapest

Then, that was that, bags packed and plane to plane, here I am back in New York sipping coffee in my in-laws’ kitchen. I have two nights off before hosting Safe Haven Songs on Tuesday at Irish Haven. Thanks for keeping me company so far.