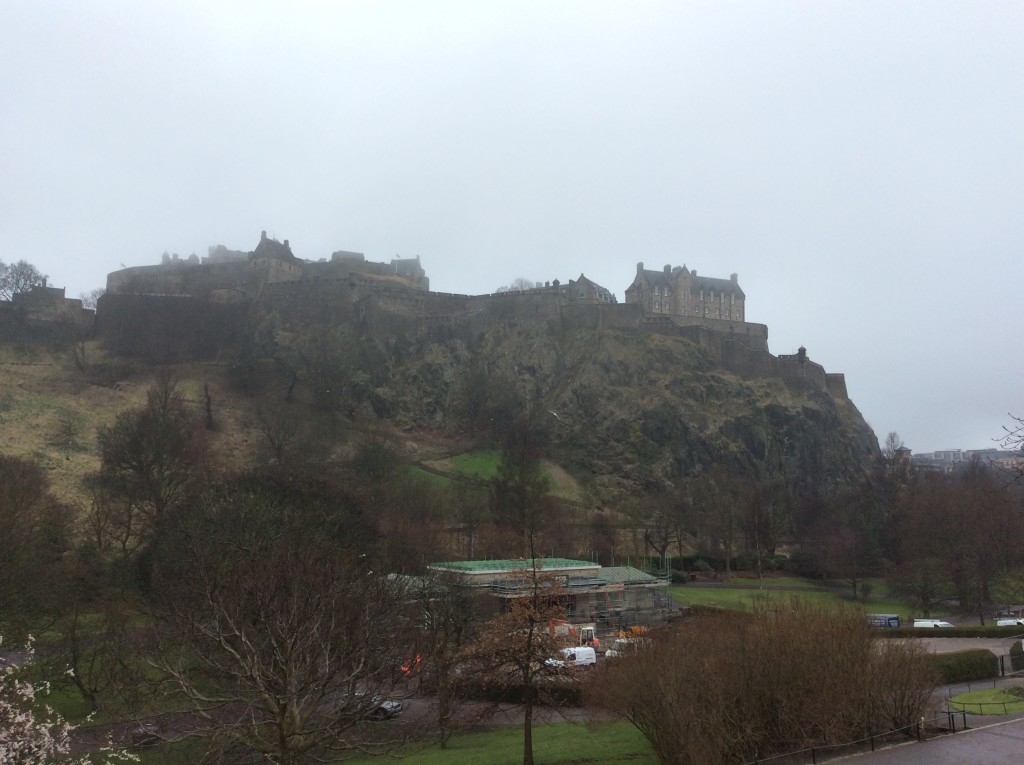 President Obama has nominated the next supreme court Judge. Trump and Clinton bolster their position. There has been a sudden increase in number of migrants trying to cross from Libya to Italy.  FIFA says it’s a victim of corruption. 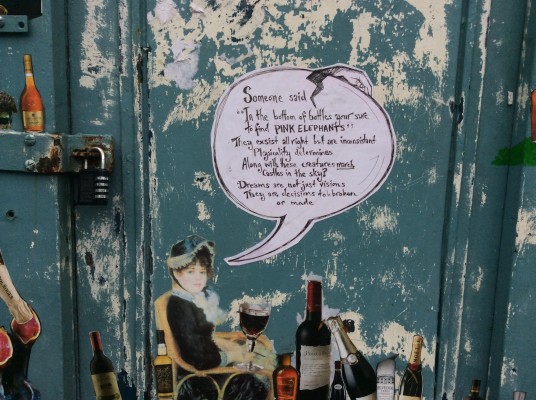 In Graffiti We Trust

A persistent foggy drizzle hung over Edinburgh for my 24 hour stay. It didn’t stop me from enjoying the beautiful city and didn’t deter any of its hardy residents from coming out to the gig. 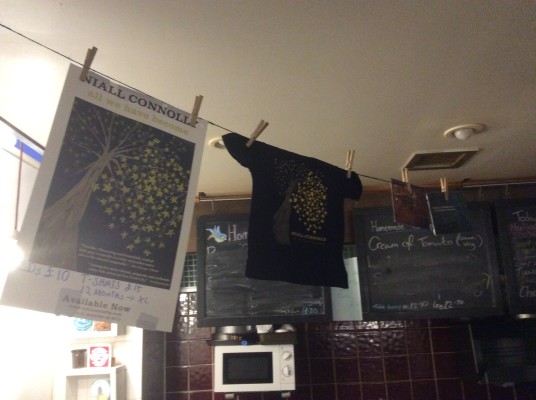 Up loading my Merch On Line, The Bluebird Cafe

I played at the Bluebird Cafe. This was a really late booking and the cafe’s proprietor Kylie MacGregor was extremely kind to accommodate me. It is really small and cosy cafe, inspired by the music of the cafe with the same name in Nashville, and by southern cooking. I had the two best cups of coffee of the tour there and a mighty fine breakfast too. The gig was a real treat. The cafe is technically closed during the gig, so Kylie really is doing this only out of her love for music. So, Edinburgh friends, I do urge you to go drink your coffees and have your breakfasts here. I did the gig completely acoustic and it was very enjoyable. The crowd were great and the  new songs seemed to go down well. Kylie is a big Casey Black fan and it was Casey who connected me with her.

Neil Tully was there with his girlfriend and a few of their friends. The Tully family have been great supporters of my music, Neil’s twin, Donal, was at the gig in Groningen and I’m looking forward to seeing at least two more of his siblings in London on Friday.

My friend Emmett Christie who played bass on ‘Songs From A Corner’ was there with his father Gerry. Gerry is a real character. No time for small talk with Gerry. Emmett and I shared a house with a load of other friends, 24 Evergreen Street in Cork, I think between 2000-2002. There was always a friend of someone’s staying on the couch. I remember one time someone being there for several days before we realised none of us knew who he was. Emmett had a dog called Trevor. I remember one time for my birthday Justin, who also lived with us, had bought me a selection of fancy belgian beers. I saved them for special occasions. On one such occasion I poured myself one of the stronger ones and sat down with a book. Only to hear the slurping sounds of the little puppy Trevor gulping down my 8% beer. I was fairly surprised, to put it mildly, to hear that Trevor is alive, if not particularly well, and living with Emmett’s father in Tralee. 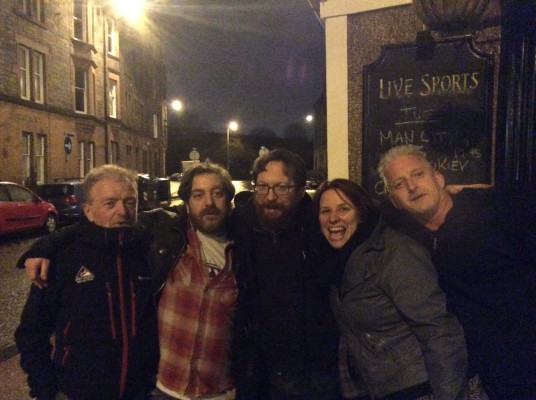 Gerry, Emmett, Niall, Kylie, Mac – I think someone put a drink in my drink

Mac also came up from Bishop Auckland. Mac is a great character. I also met him first at the Red Lion late night gig, it must be 10 years ago now. Last night he informed me was his 42nd Niall Connolly gig. He says he’ll stop coming when I get it right. Mac has organised a load of gigs for me in Bishop Auckland and it is from his house there now that I am typing this. I could write a novella about my Bishop Auckland stories. The first time I played here I came up on the train on a Saturday from London and there was a drunk bleeding football fan on the train next to me. When Mac picked me up from Darlington train station (the first train journey in the world was here!) he arrived hobbling with a black eye having been jumped the night before. I didn’t know him very well at the time and I wasn’t sure what I had let myself in for. Well, my first gig here was a an absolute blast and Mac and his friends are some of the nicest people you could hope to meet. Everyone here has a nickname. I don’t know many of my friends here’s actual name. I’m not certain half of them even remember their own given names. 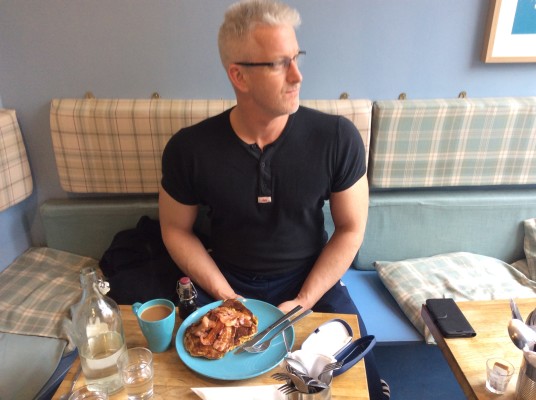 Mac and his breakfast at the Bluebird Cafe, Edinburgh

When their friend, and now my friend, Hezze was getting married, he and his bride decided they were going to use three of my songs in the service. I was of course very flattered, more so when their friends got together and asked if they all chipped in to pay to fly me over if I would come and do it live as a surprise. I said, yes. The look of surprise on Hezze’s face when I was snuck in a side door to sing the first song at their wedding is something I will never forget. Another of my favourite stories from this night happened in the ladies bathroom. No, no, no I wasn’t there. Clare noticed that toilet wouldn’t flush. And being her father’s daughter, went to fix it. When Clare lifted the lid off the cistern it became immediately clear why it wouldn’t flush. A half empty vodka bottle inside the cistern being the culprit!

Mac was driver/roadie/tour manager and friend to the entire band on our  last band tour in Ireland.

Mac drove me down from Edinburgh to Bishop Auckland taking the more scenic A68 and filling me in on lots of local history along the way. Not surprisingly along the Scottish/English border there’s plenty of it. We passed through Jedburgh, home of Mary Queen of the Scotts, the Scottish lowlands and the Northumbrian mountains. There was almost no traffic and again despite the fog there were some stunning views. I learned that British Forestry was an unintended benefactor of World War 2 when Britain was running low on pit props for the coal mines and pine forests were planted to address this. We also drove passed Otterburn. This I learned was where a lot of the Allied troops trained before heading to Normandy for D day in 1944. 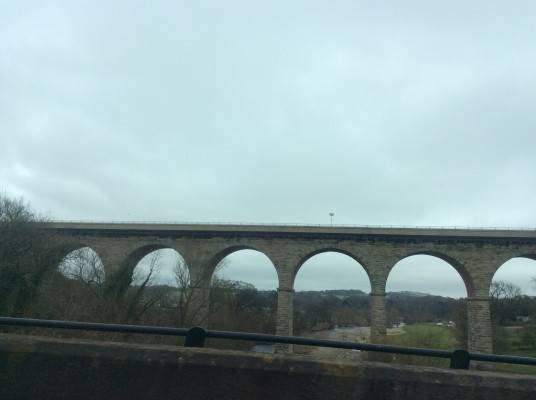 Mac is also a regular supporter of his local football club , Bishop Auckland FC. I learned that after the 1958 Munich air disaster which killed 23 people including 8 Manchester United players, 3 Bishop Auckland amateur players went on to fill in on the decimated United side. On a lighter note, I also discovered that Stan Laurel lived in Bishop Auckland too. 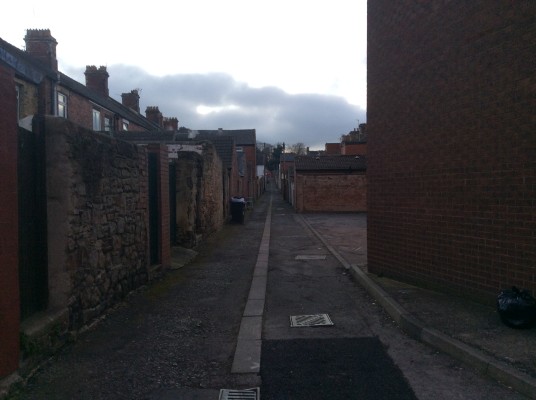 A Laneway in Bishop Auckland at Dusk

Tomorrow is St. Patrick’s Day and I am not sorry to miss the mayhem of NYC on March 17th. I’m playing at the Green Tree in Bishop Auckland. I’m looking forward to it.