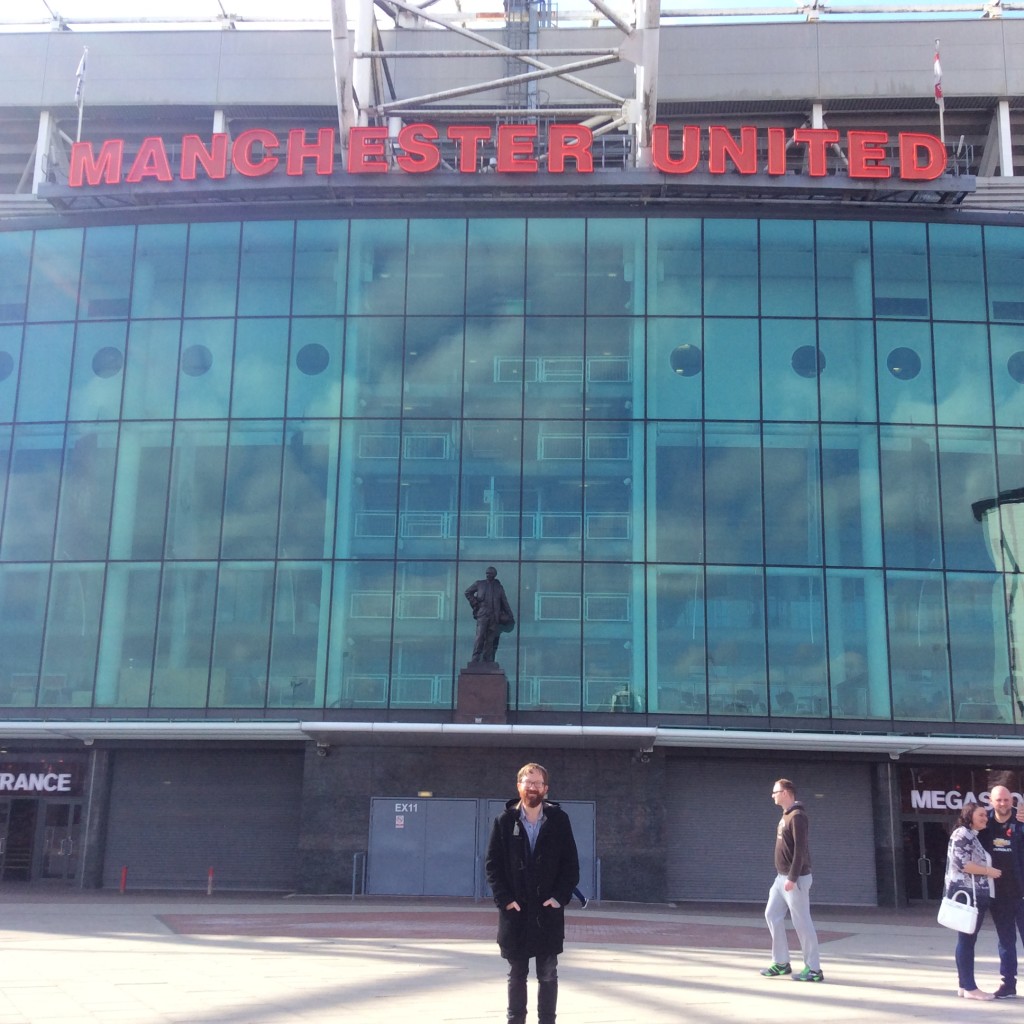 Mac dropped me off in Manchester before making his way onward to Bishop Auckland. The house concert host, Morag, made me feel extremely welcome. It was a very large and beautiful shared house. I was happy to have a room to chill out in for an hour before the gig. It being a Saturday meant I had a rare opportunity to skype Clare during the daytime. She was at home visiting her parents and this was my first time talking to my in-laws in months.
People starting arriving for the house concert as delicious aromas of vegetarian cooking filled the house. The house used to be an old Sun Ray Treatment, which seems like some quasi medical treatment from the 1800s, I’ll definitely have to research that more. Check out the signage complete with “lady assistants”. 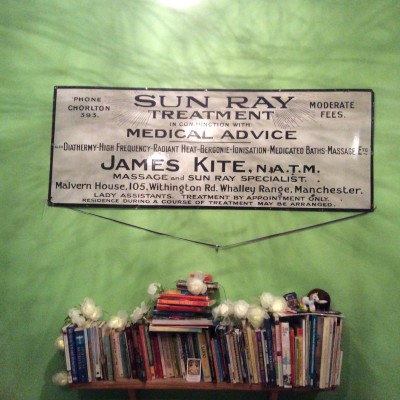 Morag and her partner John are sound out. John is the only Englishman I have ever met who loves baseball.

My cousins Martin and Imelda came and it was my first time meeting Imelda’s husband Rich. Mel was there from Germany, visiting some of her Manchester friends Helen and Hugh. And David Armes who I met at the Parlour in Providence, Rhode Island came down too. Again, wonderful when these worlds collide. It makes this seemingly endless ramble seem slightly less random. 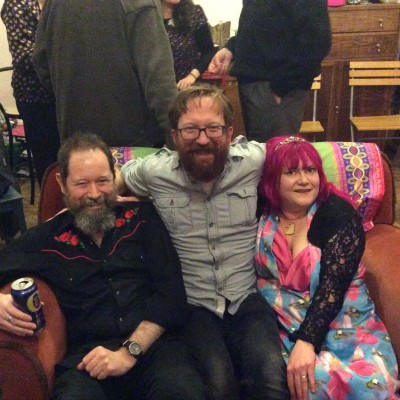 Myself, Morag and John 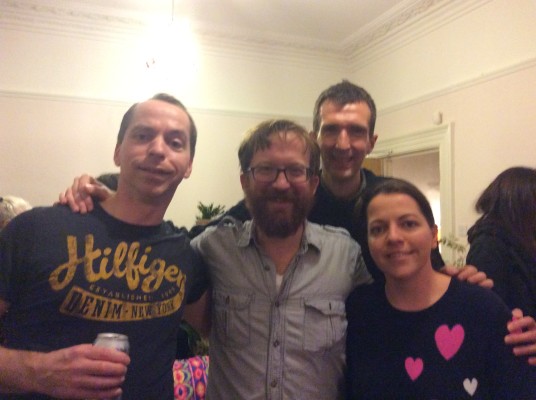 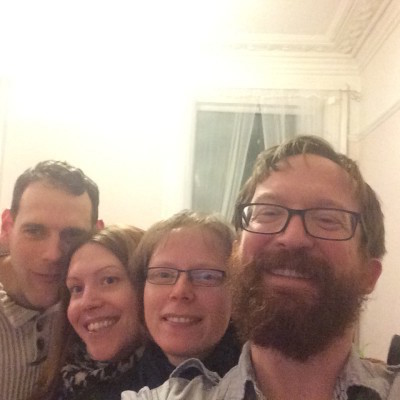 The gig was completely acoustic, the room was packed, there were even people sitting right at my feet. I struggled to keep my glasses on without a mic stand to prop them back up. A hard life indeed. I enjoyed it and did pretty well on merch. I ate some delicious vegetarian food.
Afterwards I stayed at Martin and Kathryn’s place and Martin I stayed up till the small hours catching, up chatting about family in general, and a few days after Grandma’s anniversary, Philomena in particular.

This morning Martin cooked up a feast, and then, we went to Old Trafford, the home of Manchester United. Martin is just one month older than me and we were both mad into football as children. My interest is more passive these days and I was surprised by how excited I was as an adult to finally see Old Trafford. We took the guided tour with a third generation Manchester United fan, Billy Smith. Billy was great. Humourous, fast and knowledgeable. Our group of about 10, included 4 Japanese young fellas. Two of whom described themselves as Man City fans, one as a Liverpool fan. Our guide joked that this was great because they would have a chance to see some trophies they would otherwise never see. When talking about MUTV he added that Liverpool have their own TV Channel too, “It’s called the History Channel”. 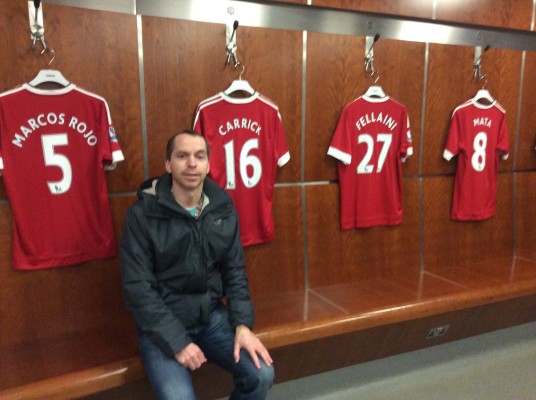 Looks like cousin Martin Carrick has finally made the United Team. 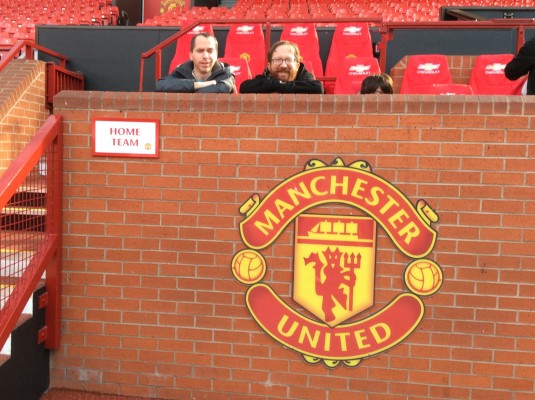 Oh wait, United are playing an away game today?

“From Hell, Hull, and Halifax, Good Lord, deliver us”
Adam Shearer picked me up from the train station in Halifax. I’ve been to Halifax in Canada, but this was my first time checking out the original. Halifax was built on the textile industry. A big wool town it also once housed the largest carpet factory in the world. I think.  Even now the picturesque city centre contains many repurposed old mills.

Adam informed me that it was the last city in Britain to abolish execution. Indeed the Halifax Gibbet is said to have inspired the invention of the Guillotine. The Guillotine itself was designed as a more humane way…to cut someone’s head off. (Last used in France in 1977? Can that really be true?!!) The Halifax gibbet was used to decapitate petty thieves in the area until 1650, when so I read, none other than Cromwell, deemed it too severe a punishment. Adam also shared the story of “the running man” with me. Local history suggests a convict could be pardoned, in the extremely unlikely event that they could hear the pin being removed from the gibbet, pull their head out in time, run blindfolded through town and make it across the river. Apparently one man succeeded. Another interesting, albeit, somewhat morbid fun fact, if you were convicted of stealing for example, a pig, the pig would be tied to the pin that, once removed, dropped the blade on your neck, the pig thus becoming the executioner. Fascinating. So notorious was Halifax Gibbet that it inspired the “Water Poet” John Taylor’s ‘the Beggar’s Litany’: “From Hell, Hull, and Halifax, Good Lord, deliver us”. Now so, betcha didn’t know that a minute ago. I didn’t. 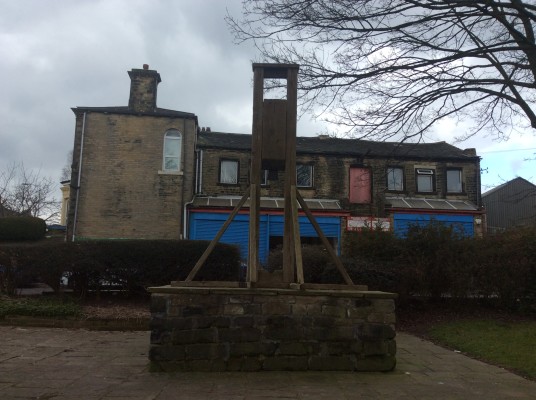 The gig last night at the Ivy House was thankfully far less interesting or dangerous than all of the above. It was enjoyable, the booker and my hosts Alan and Gillian and a few more friends of Dan’s were very supportive and kind. It was largely a Sunday evening background ish gig though with one table at the front clearly having spent most of the day there. Definitely, the best gig I’ve done in Halifax so far. I am glad I had the chance to do it.

Adam and Gillian are good friends of Dan and they were tremendous hosts. 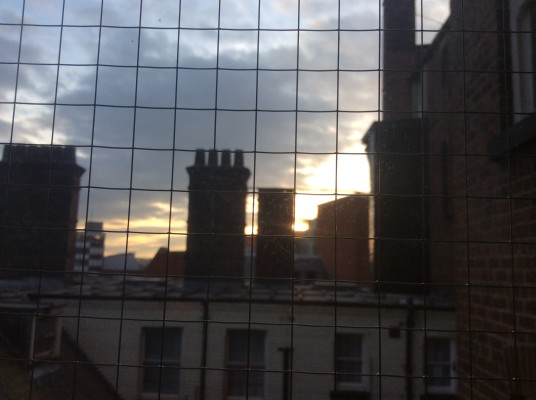 Leeds from Room 808 at the Discovery Inn.

I’m in Leeds now. Sitting in my hotel room. Waiting for the gig. I am comfortable and well rested but frankly a little bored and lonely. These are some of the parts of solo tours that are hard. Plenty of waiting around in strange towns.  I’m looking forward to the playing of course, but also really looking forward to getting back to Ireland and eventually New York. For now, the Gaslight Club in Leeds. I’ll give them all I’ve got.