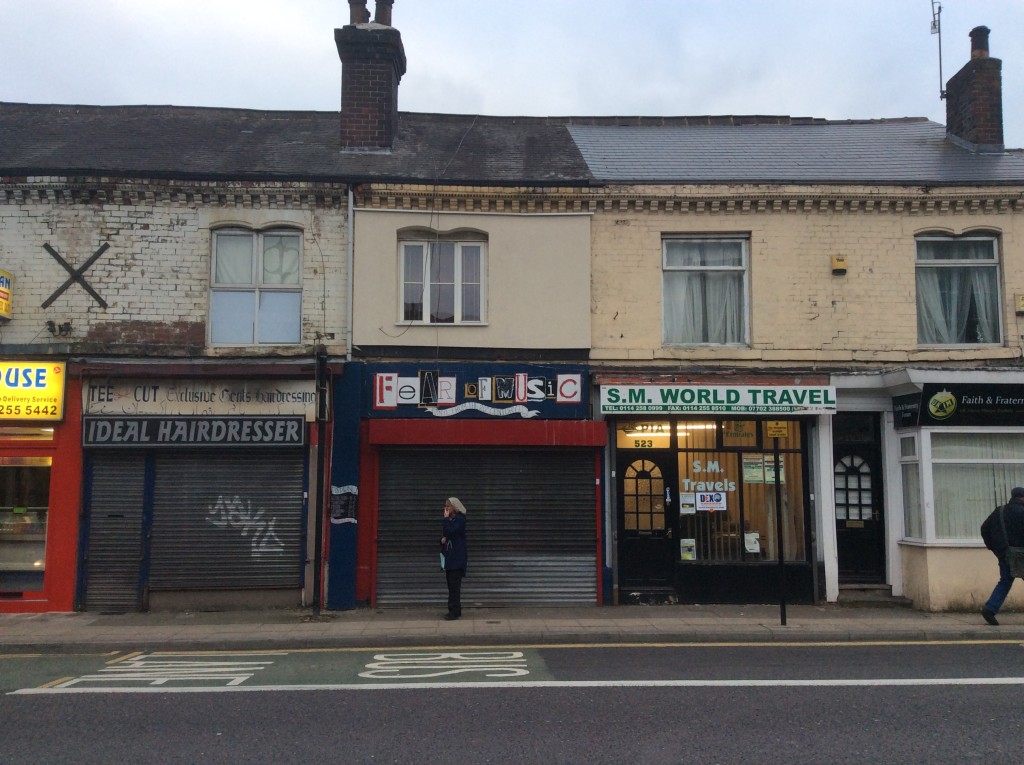 I woke up in my hotel room turned on the TV. BBC World News. Explosions at Metro stations in Brussels. Two more explosions at the airport. Flemish national broadcaster reporting 13 dead.
Ah fuck.

The number will be higher next time I hear the news. That’s the way it goes. Last night my heart was broken to hear of the family who drowned in County Donegal, and this morning this. Uh.

Yesterday, I did almost nothing. I got a haircut. I came out looking like Morrissey. It required some quick dequiffing alterations before the gig. The gig was at the Oporto, a Monday night series hosted by a very fine Scottish songwriter, Gary Stewart. Inspired by Greenwich Village’s The Gaslight. I couldn’t not tell them I had played the Gaslight during its brief come back with Randy Burns.

Gary hosted the night, I was one of three acts. Gary is a lovely songwriter, like a Scottish Paul Simon. Liam Sullivan started with a set that included covers of Bruce, Neil Young and Loudon Wainwright III. He was good, I’d rather have heard more of his own stuff. I played a short set, and it went down well. After me a band called Samh played. After a few technical hitches they settled in. I particularly enjoyed the songs where the bass player switched to trumpet. There last song, presumably called ‘ Animal’, had few people off their seats dancing. As I was leaving I was surprised to see the bar and the street itself start to get so busy approaching midnight on a Monday. 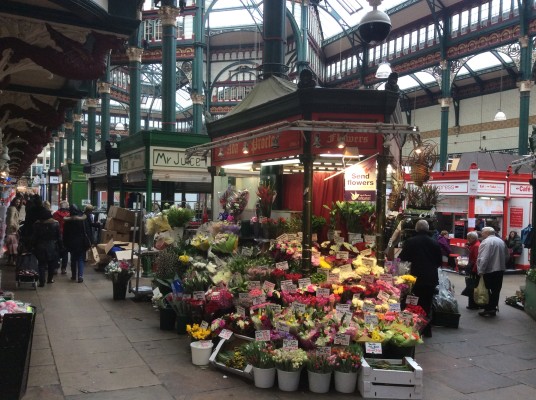 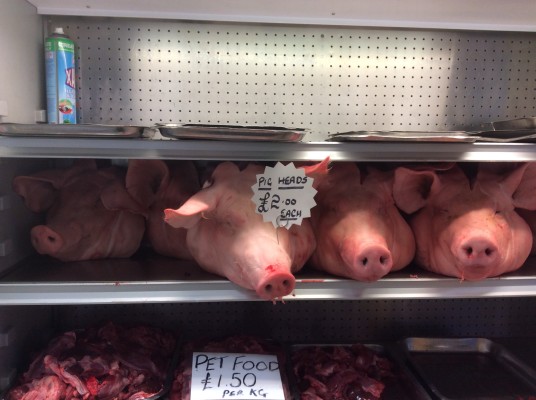 Before taking the bus to Sheffield I spent a glorious 45 minutes in Kirkgate Market. Europe’s largest indoor market. Here you could if you wished spend one English pound on:

For two pounds you could buy: 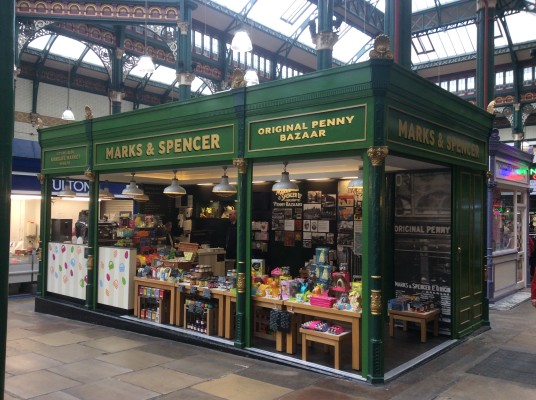 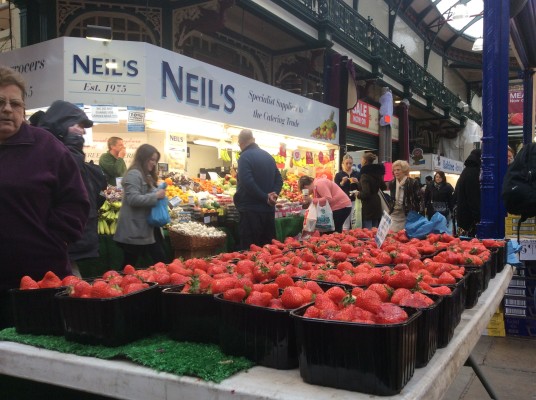 It occurs to me it would be a great practical joke to leave a pig’s head in someone’s fridge. Obviously not one of my vegetarian, Muslim or Jewish friends. I am thinking along the lines of impractical joke, rather than a hate crime! ( Mulcahy, I remind you we will be playing together on April Fool’s day, consider yourself forewarned.)

On the Bus to Sheffield

This leg of the journey cost me 1 pound.

Quarry Hill. Mixed Development. Naming neighbourhoods for what they replaced. Outside the bus station. Put on my headphones and search for peaceful thoughts.

This bus smells like someone took all the piss in the North of England. Reduced it to a fine powder. And coated every surface in it. It smells so bad I can feel it in my eyes.

Songs by old friends whilst in transit. I feel pulled in every direction. By time, space and circumstance. A motorbike passes on a bend, on the outside lane. Grey skies and red brick buildings. Not the city. Not the country. Not the suburbs.

The Mega Bus drops me a full hour and another bus away from the venue. It is the bus equivalent of Ryanair.

Waiting for the number 3 bus driver to return to get from Meadowhall to the venue. An older woman jokes with me that she might steal the bus and take it for spin while we are waiting for the driver. When the driver comes back she tells him, “It’s not so hard once you get the hang of it.” The driver plays along smiling and thanking her for returning it. It is a simple and charming interaction on this sad day.

This is my first time in Sheffield. Sheffield with its manufacturing heritage, steel,= universities, football clubs, and of course Pulp and Jarvis Cocker. Sheffield people use the word ‘Sound’ the same way as Cork people. 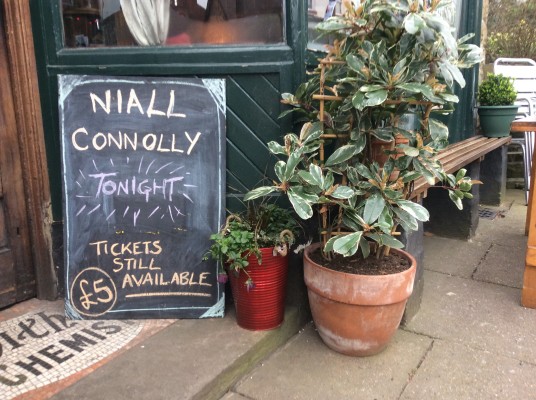 I stayed at local airbnb that was arranged by Jonny at Cafe #9 in exchange for 2 free tickets to the gig and 2 CDs.

This morning when I woke up the NPR news was back to business as usual, leading with US election talk. Ted Cruz claims once he is elected it will be gloves off and he will destroy isis. His language conveys all the nuance and complex understanding of a drunk, racist, toddler.  It makes me think of a quack doctor treating lung cancer with cigarettes and liver damage with whiskey. It might make you feel better but it’s not going to help.

At breakfast Gerard, a guest from Kenya and Phil were talking about European and African politics. “Who is in power has more immediate impact in the lives of Africans.” , “They send the resources to their part of the country”, though I understand what he means, it does seem to echo recent headlines concerning the British budget.
The gig was on the quiet side but not nearly as quiet as I had feared. My cousin Gemma ( Martin and Imelda’s sister) came with her man , Hobbo/ Andy. Andy broke his rib skiing last weekend and every time he laughed, he clutched it in pain. In my silly, tired, tour mode I was perhaps not ideal company. They are both great craic. Jonny, the owner of Cafe #9 and the man responsible for booking me is an absolute gent and was a very gracious host.
In fact i am back at the cafe typing now and he just offered to drop me off at the train station on his way into town.

“I am tired, I am weary, I could sleep for a thousand years”
Lou Reed.
Well, Lou Reed is sleeping now. I am dreaming of crossing the Hudson at Rip Van Winkel bridge and following Rip into a deep slumber.

This tour is a lot harder than the one on mainland Europe. I am trying some new places. The money is  far worse. It is hard to justify the effort for the compensation.  And  today I am feeling a bit low.

Ireland will be helpful.

Exhaustion. Horrible news from Belgium. Grey skies.Buildings piled on top of each other. Lives mortgaged to the outskirts of overpriced cities, beneath grey skies. Woo ha. Hopefully after a nap my morose mood will pass. It certainly feels self indulgent. My fortunate life. To be whining. Christ, I am tired, I am really beginning to believe there is something to Margaret Atwood’s assertion that jet lag is the soul trying to catch up with the body. Today, even though I am only taking trains, I literally do not feel myself.

Phil, one half of the airbnb host couple was sick,I am hoping I haven’t caught whatever he had.

Meeting Rich Young in Cambridge. Rich is fierce nice guy and has played a load of Big City Folk stuff in NY. I’m looking forward to that.

March 23rd, Night off in Cambridge

I arrived earlier than planned in Cambridge. I was immediately and predictably handed a flier for a literary festival. Upon query, the flier girl recommended I while away my hour at a nearby drinking emporium. And so I waited for Rich at the Devonshire Arms in Cambridge. A man called Johnny was talking about Milosevic’s War Crimes trial and Milosevic’s pony tail. Another chap was talking about Rembrandt and daub painting. A guy called Steve works at the “jungle” the refugee camp in Calais. It was a bizarre and interesting hour. 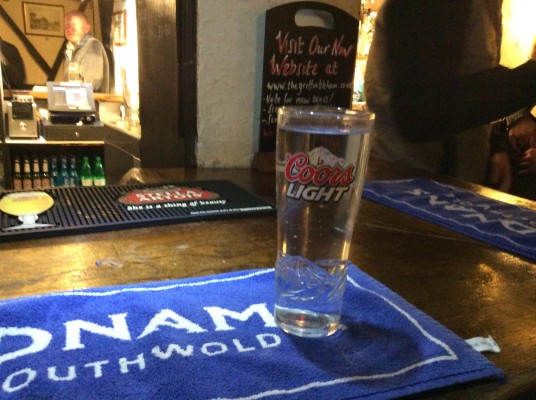 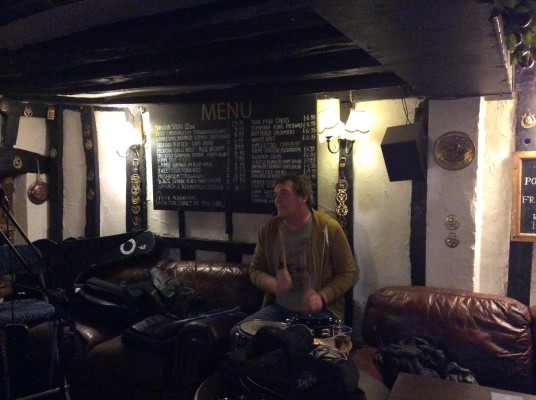 Rich Young rocking the drums at the open mic.

Later Rich came and brought me to an open mic in a small village pub, the Griffin. We ate a plate of salty delicious egg, ham and chips and listened to some locals playing music. I did a couple of songs and made a couple of friends. I had a great chat, listening to music with Rich afterwards and went to bed in much better spirits than I began the day.