Catching up with myself on the aircoach

Brussels airport reopens. Doping allegations in British Sport. Star Wars to be filmed in West Cork…and the English Market. Is that true ? Mad.

I’ve been a bit slow with the blog the last week or so, as I have been spending time with family and friends and I haven’t had the desire or space to squirrel myself away and type. I’m back on the bus, solo, now. Ireland has been great. I’ll try and capture some details. 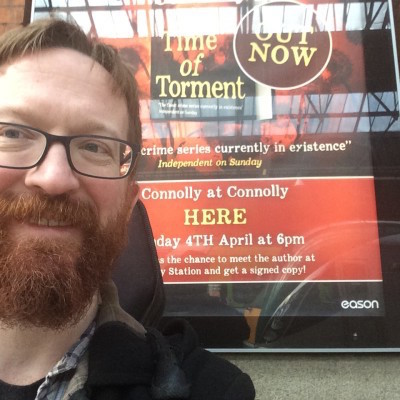 The train up from Wexford to Dublin is beautiful. I headed on to Whelan’s, there was a lovely fire burning in the corner of the bar. Real fireplaces in bars. Are there any of those anywhere in New York I wonder? Gerry on sound was the same fella who did sound for me at the Wonder Stuff. Those Sensible Shoes did a great set again. The gig was a joy. I loved it. We had about 50 people in, some of those certainly thanks to Glen Hansard’s positive tweet. There were definitely a load of people I didn’t know there. Ronan O Snodaigh of Kila came down and joined me for 4 or 5 songs on the bodhran at the end. Afterwards Anthony drove us, myself, his wife Tifany and the more Sensible Shoe, Rachel, back to Anthony’s parents house in Bunmahon.
Anthony’s mother Angela runs the Gealach Gorm theatre in nearby Kill. Together they host the annual Gealach Gorm Songwriter Festival. Angela is local legend, the type of person who has a vision and follows through and makes it happen. There are not enough people like her. My only ‘complaint’ was she literally wouldn’t let me lift a finger while I was there. Anthony’s father Bobby appeared just as we were leaving, in the door in his cycling gear, fit as fiddle back from a massive spin, putting us, some decades his junior, to shame.

On Thursday morning, Anthony took me to the strand in Bunmahon and the local copper mines. I’ve been hearing about these places for years so it was great to see them. We were also gifted with another rare Irish blue sky. I definitely want to research more about the mines, fascinating history there.

Thursday night we had a house concert in Bantry at Pa and Eimear Curran’s house. Here’s a picture from outside their house looking out at Whiddy Island. Jesus Cork, you are making me homesick, and I am still at here. 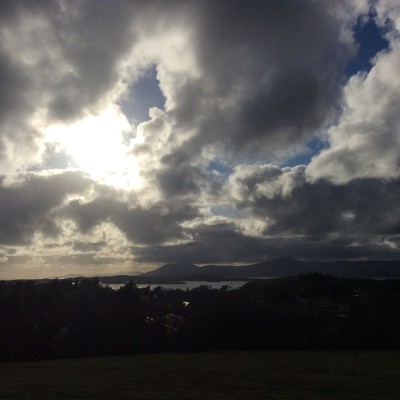 A Song for  Taidhg Burke
Taidhg Burke was the bass player from the Calvinists. He was the back seat passenger in a car crash, and died in October 2013. Frank Wieler from the band and I, used to hang out a lot together in Cork in the early 2000s, I had met Taidgh through Frank when I was down in Bantry for gigs over the years. Taidhg’s sister Roisín and father Noel were at the gig.
Here’s a song I wrote for Taidhg and his family and friends. On hearing of his death this song just came out of me.

Boys Will Be Boys – A Song For Taidhg Burke

The morning after Bantry

The wind is howling outside my window. Bantry is spectacular. Yesterday the weather was gorgeous. Today it sounds like a thousand angry ghosts attacking the coast.
I enjoy listening to this kind of weather. From the comfort of a warm bed.

Last night we played a house concert in Pa and Eimear Curran’s house in Bantry. Those Sensible Shoes were magnificent, perhaps the best they’ve been on this tour. The two most unforgettable moments for me though took place after the gig. A bit of of an old informal sing song began and Eimear’s rendition of ‘My Lagan Love’ and Noel Burke’s gorgeous take on ‘John O’ Dreams’, were spellbinding. Another friend of there’s perhaps inspired by a little too much vino sang with great passion using her umbrella as a microphone.

My 6 year old niece Analie, came to the gig with my sister Emma. It was lovely to see her swaying along to the songs and mouthing the words. Though she did say “It was a bit too long”.
She was probably right, some of these gigs are so fun that I do have to be aware of not playing too long.

My school friend Damian Bird came with his daughter Hannah. This was Hannah’s first gig ever. So the pressure was on me to make a good impression. Damian is sound out, once in school I mentioned that I liked the Cure. The next day he came in with a pile of 90 minute tapes, packed full of the Cure albums. 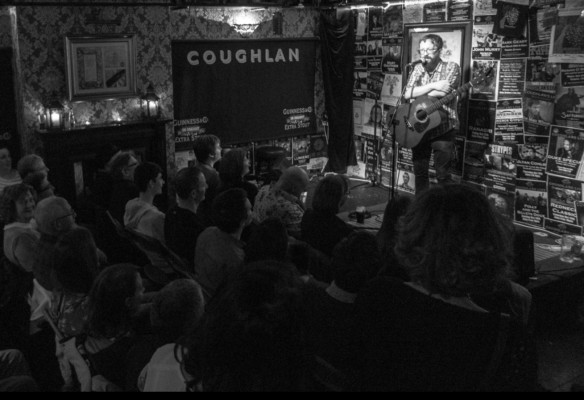 Anthony Mulcahy’s Photo stolen and crudely cropped by me.

Eric and Pennie flew in from Glasgow. Ulf and Mel and Micha and Guido ( the Chimney Sweeps) and Lena and John Collins in from Germany. The Tullys in from London. Pressure! My aunts Patricia and Madeline were down for my father’s 70th birthday the next day. This was Madeline’s first time seeing me play live.

What a great night, again Those Sensible Shoes, nailed it and really set the tone. The room was jam packed. Definitely one of the most enthusiastic crowds I have ever played to. They stomped along, sang along, and were pin drop quiet depending on the song. I love Coughlan’s. It is a brilliant room and they really take care of musicians there. It’s also a hard place to leave, but we got our reasonably early and fairly in tact.

My friend Dave O’ Mahony wins the best audience banter of the tour for the following remark: I was introducing my song ‘Corridors’ talking about living halfway between Prospect Park where everyone is busy staying healthy and beautiful, doing yoga, pilates, zumba and tai chi and Greenwood Cemetery where everyone has stopped trying to stay healthy and beautiful. Dave added, “ Spinning in their graves”. Consider this your credit for when I steal that one Davey.

Saturday, Day off Papa Frank’s 70th Birthday
Saturday was my Dad’s 70th birthday party. It was brilliant. He was surrounded by friends and family who love him and the good time he deserves. You’ll have to read his books for more details. 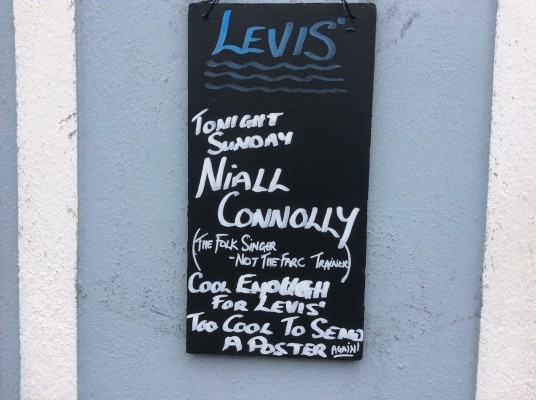 West Cork is stunning. It is weird and wonderful. When the sun does make an occasional appearance, it is jaw droppingly picturesque. My friends Joe and Caroline have a bar in extreme West Cork, on the edge of Ireland. Levis’ Corner House Ballydehob. You have to go there. Seriously. Go. 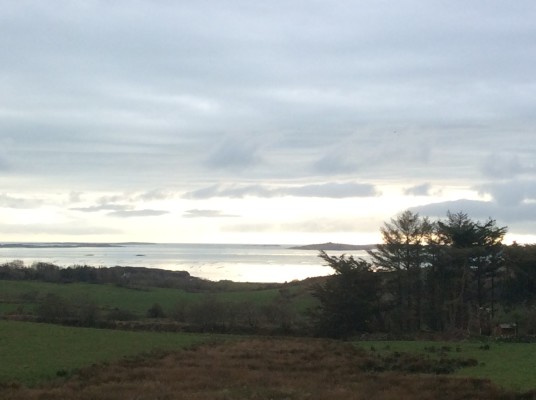 It is an old shop/pub with counters on both sides. It was bypassed by the Celtic Tiger, a period where many great bars, venues and restaurants were destroyed by renovations. In came the espresso machines, double glazing and massive TVs and out went the individuality. Levis’ on the other hand, has retained all its curious charm. Joe’s grand aunts ran it for decades and they have entered local folklore. West Cork is mad. Joe tells a story of Jeremy Irons and his dog at a gig there recently. Also,  location scouts and and tech crew working on the next Star Wars film were in there a few weeks ago too. Naturally. Have a listen to the RTE Radio 1 Documentary about Joe’s grand aunts and the bar. And then, seriously, go there.

Today was a long travel day, from Ballydehob in the car with Michael Carr and Darren from Blue Monkey. Michael is an old friend, he hosts the GReen Room on 96Fm and did PR for ‘Sound’.

Then the aircoach to Dublin, then the 65 bus to Ballymore Eustace. I was sitting next to a woman from Malawi and her sister on the bus from Cork to Dublin. I was sitting in front of a family from Croatia who live in Cork. Their Cork Croatian and Dublin Malawi accents were wonderful. I learned all this because my Malawian neighbour was full of chat and fierce friendly. She works as a caregiver, doing home visits with the elderly in Dublin. I bet she is brilliant. She told me, “ I love my job, you have to love this job to be good at it.”

The 65 bus seemed to stop at every crossroads in between. From the bus, Mags, the B and B owner picked my driving me from Blessington to Ballymore, passing Russborough House ( the scene of a famous IRA robbery in the 80s) and Poulaphuca, the man made reservoir. My host tells me that her grandparents’ house had been in the valley before they were relocated so the valley could be flooded and serve as a reservoir. “There are a load of houses under the water there” she tells me.   Apparently one man was so devastated to be moved that he sat on top of the roof his house as the valley was being flooded. In light of my own family’s dealing with Natural disasters of floods and fires, I can imagine how traumatic it must have been for some of these people to be forced to relocate for this man made flood.
One hundred years later, on this beautiful spring day it is beautiful and calm. I can’t help but wonder that would surely be an incredible dive. Maybe I should tell the Star Wars folks about that too.
I’ll play my new song ‘Artificial Lake’ tonight.

I’m grabbing a snack before the gig. Some semi drunk, I at least hope he is drunk, guy is at the counter ordering a fish and chips “Now I want fish in me fish this time ya hear, las’ time there was almost no fish in me fish”, the Indian fella behind the counter is well able for him. There’s an Indian Soap opera on the tele in the corner. This place is attached to a pub called the Thatch. Which was one presumes, one time thatched. I sat by a mighty open fire and did bit of this typing and a pint of Guinness at the Thatch before the gig.

I am staying at a  lovely  B and B. It is lambing season. When I got out of the shower the owner told me her husband was out in the field pulling two lambs feet first into the world.
Tuesday April 5th, Dublin

Again, the sun is shining in Dublin. Lucky me. Last night’s gig was gorgeous. Thanks Roy and Mick Murphy’s pub for having me. My friend Ronan Coakley and his fiancee, Hayley, came and told me they plan to use my song ‘Away with the Birds’ as the first dance at their upcoming wedding. I knew nobody else there, and it was a lovely crowd of great listeners. I mean really great listeners, so attentive to the lyrics, I could literally see them nodding in agreement to certain parts or giving the occasional hum of approval. They were great singers too. I definitely plan on inviting myself back there.