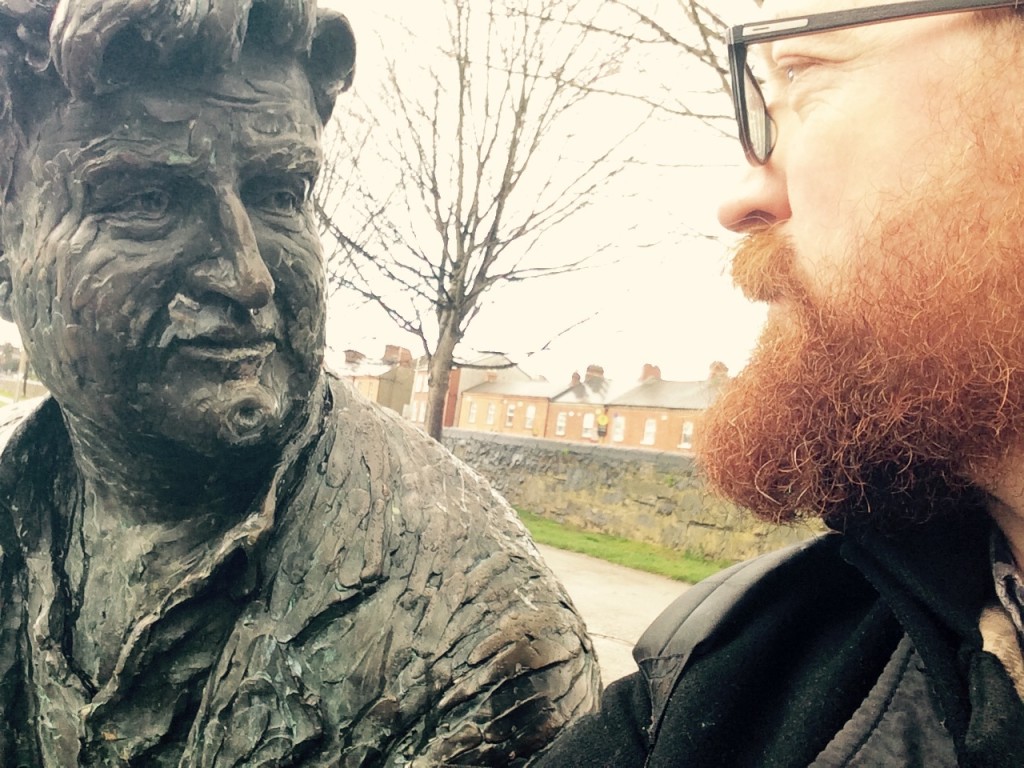 Myself and Brendan Behan by the Royal Canal.

Dublin draped in flags. Dublin remembers 1916. Dublin in the sunshine in the Spring. Bobby Sands’ quote on the side of the Auld Triangle. By the Royal Canaaaaaaal. A fine quote, though plenty of blood spilled before the laughter. 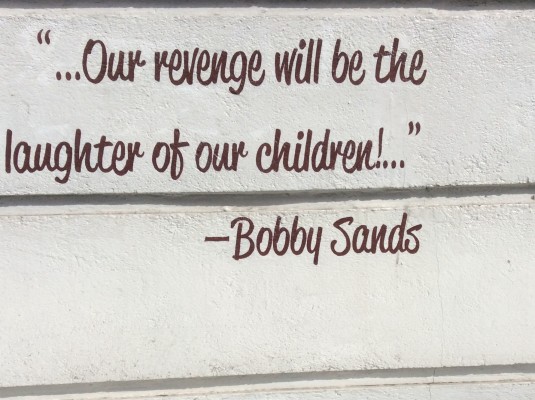 Dublin all a bustle with tourists, students, “Alrigh’ Antos” and “the fecking state of ye man”. Dublin remembers her heroes and the chaos. One hundred years later. Over 500 people on hospital trolleys this weekend. I heard it on the radio. Heroin and hollow eyes in the doorways and alleys. Buy a print of the proclamation. Put it in frame. Maybe. Put it over your mantelpiece. Or your landlord’s mantlepiece. 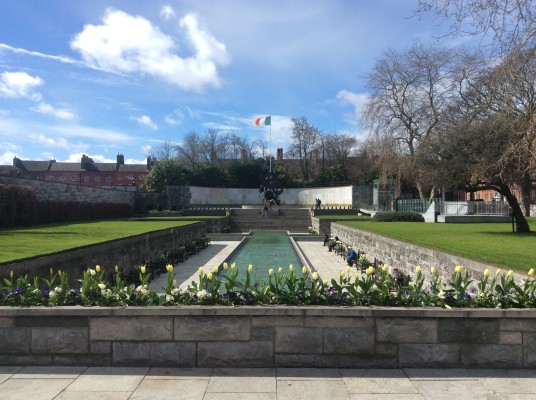 The Garden of Remembrance

A walk around the Witness History Exhibition at the GPO. This is where it happened. I liked that this exhibition is honest. It puts the Easter rising in context. It gives background of the time and the leaders of the rising, but also snapshots of the impact on civilians. 485 people killed in Easter week. Mostly civilians, 40 of them children. 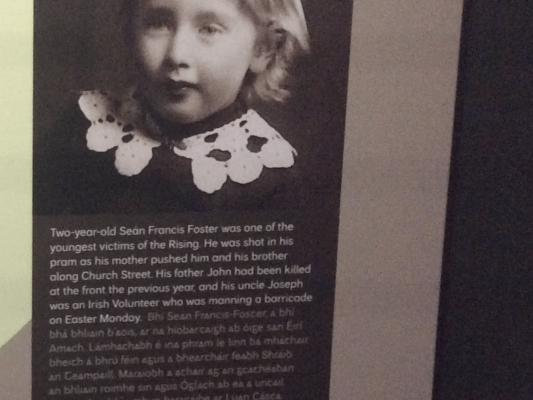 Many of the “British” soldiers and police killed were Irish born. Many ordinary Dubliners had husbands who were fighting in the Irish Brigade, on the front in France. The general public initially unsupportive of the rising, grew sympathetic as the executions dragged out over weeks. And over 3000 people were arrested and interned. The Internment camps prove counterproductive for the Empire. History. History. History. Ireland is in a complicated relationship with her past.

There are not steps to the GPO.

I walked around, learned a lot, bought some stamps and posted a t shirt to fan. Where we are now, and where it all began.

And later again in the Garden of Remembrance. We the fortunate ones who never had to fight to be free. 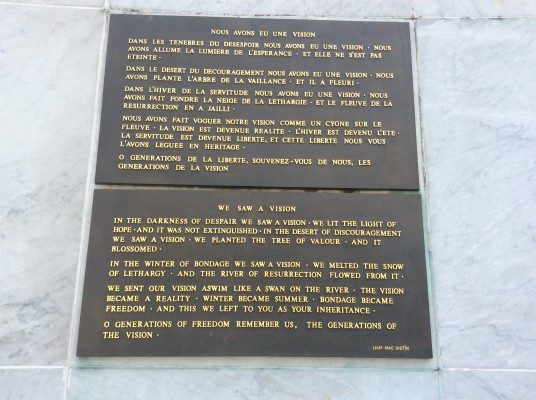 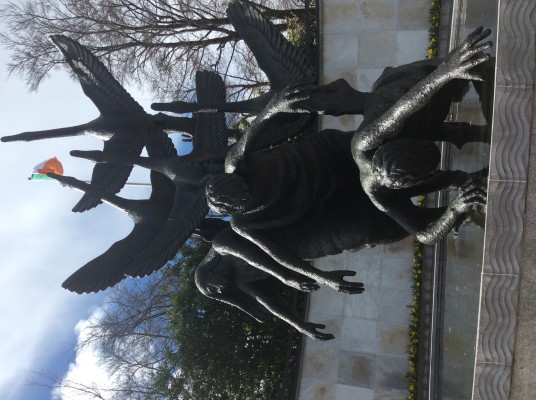 Lucius at the Academy in Dublin

In the context of all of this, I felt bad for Jess when she said it was good to be in the UK. Quickly corrected by one of the lads. “But, we are in Ireland, we are definitely in Ireland.”

Even this couldn’t dampen Dublin’s response to Lucius last night. One of the best live performances I have seen by anyone in a long long time.

Lucius played Big City Folk vents at the LIC Bar, and Ceol. In fact it was at their gig at LIC Bar that Holly met her future husband, my friend, Andrew Proctor. Andrew was playing before them and when they were running late, Andy just kept playing. Later Andy, Jess and Holly all joined me for ‘Skin and Bones’. Holly and Andy were wearing similar beanie caps, Andy remarked that in their matching headgear they were “like proper back up singers”. Holly recounted this story to me last night after their triumphant gig at the Academy.
Bronagh Gallagher ( the Commitments), Steve Wall ( the Stunning/The Walls and… Moone Boy) and Kieran Kennedy were backstage afterwards. 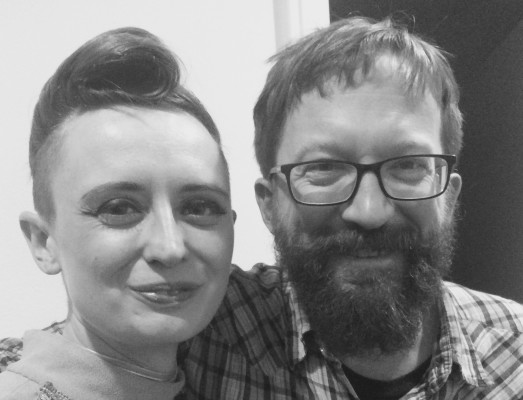 Myself and Holly ( Lucius) after the Academy in Dublin.

Myself and Declan drank my rider and watched Lucius from the back of the room. It was really a master class in performance. They owned the room, the production of the set was flawless. It had them singing from 3 different points on stage. As well as a pop up in the middle of the crowd moment. I don’t envy their sound engineer E.J. Yet, even on this, the first night of their European tour, the sound was immaculate.
All of this would be nothing if the songs weren’t also good. The songs are very, very good indeed, catchy, polished, melodic and some very interesting sonic choices. They are also the best dressed band I have seen.Yup, they get the NiallStyle seal of approval. 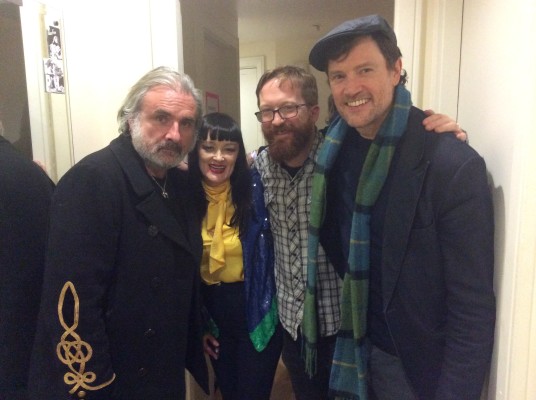 Bronagh Gallagher joined them for a gorgeous rendition of ‘I can’t help falling in love with you”, Bronagh we learn is one of the band’s heroes, as she thought to bring them socks the last time they were in town. Knowing that they were then at the stage of their tour where nothing beats a clean pair of socks!
I enjoyed my set. There was a good crowd in when I played. Considering I sound nothing remotely like the band, their fans were very receptive to my set.
I played:
A New Road
Come Back to the Table
Corridors
Beef Or Salmon
I picked Stones
Come on in ( Provisional title for a new song)

Gerry was on sound AGAIN for me. His third time this month. He greeted me with an “Aw Jaysus..” 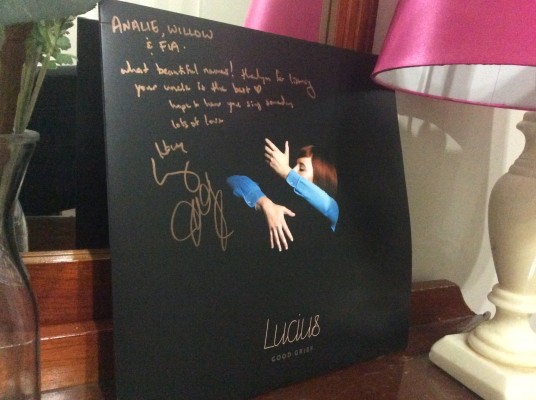 A signed record for my rock and roll nieces.

Tonight I head to Dundalk. The Spirit Store.

April 7th, the train from Dundalk to Belfast 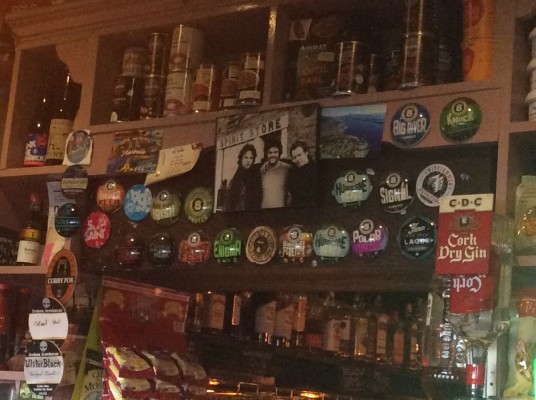 A photograph of Patrick Glennon’s photograph above the bar at the Spirit Store.

Last night at the Spirit Store in Georges Quay, Dundalk. A dockers bar and a music bar. A great bar. There’s a photograph of Glen Hansard and Josh Ritter with the owner Mark Dearey above the bar. My friend Patrick Glennon took that photograph. Derek Turner, the booker, was in Glastonbury the year I played there. I always feel welcome and at home in his company. 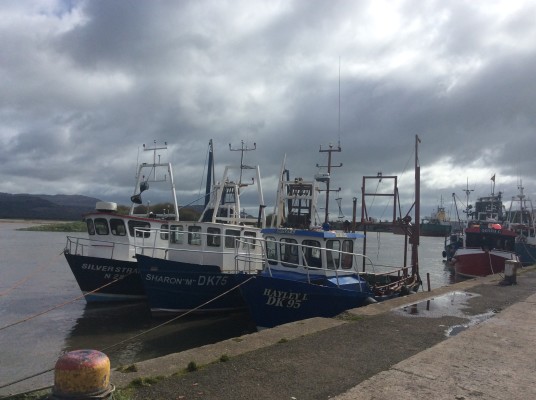 We had a pint and a catch up before the soundcheck. I learned that the Spirit Store is named that in part for the fact that those who died at sea were often Waked in the side room. Some of the older customers refuse to enter that room. It does of course also sell spirits.

( Admiral Fallow in my headphones)

The gig was in the downstairs section. Séan Bradley from Cavan opened the night. He’s a lovely guy and had some great songs. He also brought a pile of friends out, which certainly helped. Paddy Saul’s brother Frankie and his partner Geraldine were there too.

( Zoey Van Goey – You Told The Drunks I Knew Karate)

The Spirit Store paid me, gave me an apartment upstairs, bought me dinner, drinks and stuck a breakfast bar in my hand as I left this morning. And so I left feeling valued and respected and wanting to go back. 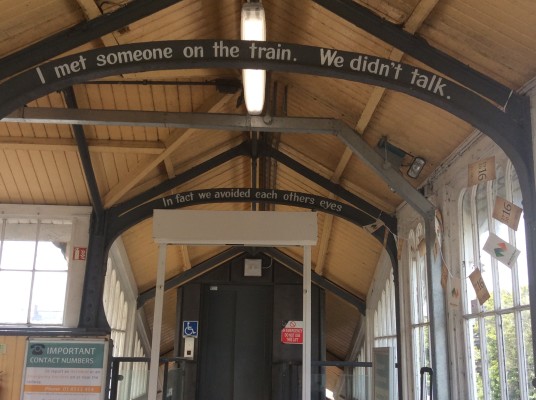 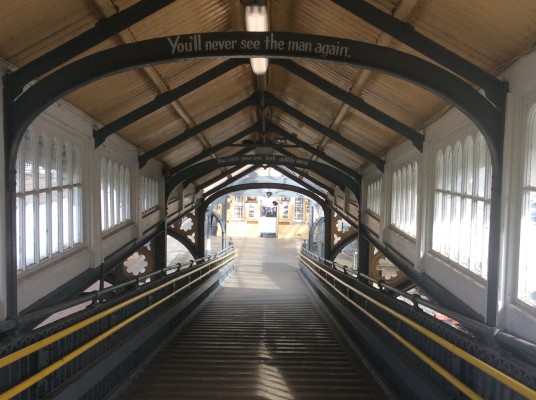