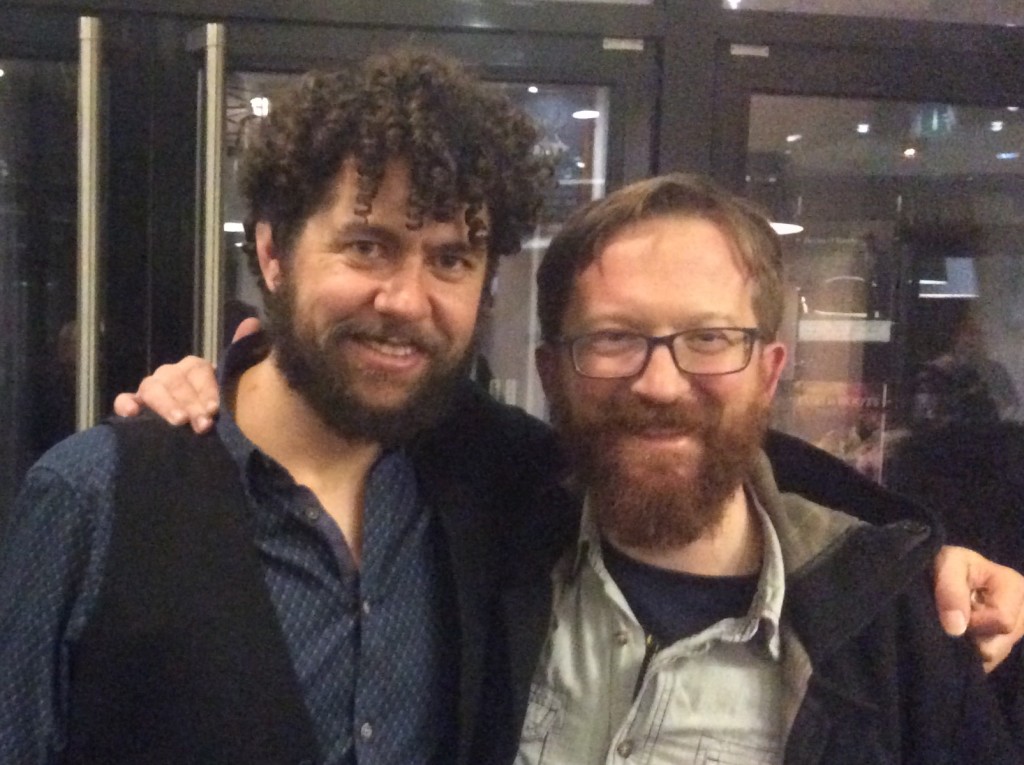 Myself and Declan O’Rourke
April 10th, Looking back at The Last Few Days
Belfast gig was very noisy. I shouldn’t do it again. Still, it paid and I sold some CDs but it is an utterly unwinnable room. I shouldn’t do it again. I would do well to remember that.
I am on the train to Waterford. King Creosote in my ears. Processing the last few weeks. Daydreaming of some time in Upstate, New York. Of household tasks. Of slowing down. Of processing my thoughts. Planting some actual seeds, and nurturing and pruning the seeds of song ideas I have on the go at the moment.
When We Are Soil
Leave That Money in the Ground
Central Station
Artificial Lake
I Have A Name
Keep on Driving Till the Buildings Shrink
I know my place
Come on In
The Man of The Hour
Sacre Coeur
Older songs I have not released:
Boys Will Be Boys
It Takes a Village
Henry’s On The Avenue
Making Up Sins For My First Confession
Six For a Fiver
Waterford – Opening for Declan O’ Rourke
Quick Notes:
Declan, dreams of bears. Geeps. Writing with the orchestra and famine.
Felt a bit sick. Sold a load of CDs.
A real gent, Brilliant musician. Singer.
Drove back to Cork with Dad.  Belfast. Dublin. Waterford. Cork. In one day.
Friday night I opened for Declan O’Rourke at the Theater Royal in Waterford. In the course of this tour I have spelled both those words in every conceivable way. I arrived to a wet and dreary Waterford. I was feeling pretty tired and manky facing into the weather. Waterford is an old Viking settlement. It is east to imagine as I enter the city. Negotiating the narrow ish footpath on the bridge with my wide load of suitcase and guitar I noted an old man chatting and pushing an older woman on a wheelchair in the rain, and I thought, that is love.
I dropped off my bags at the venue and Declan treated me to a very good Indian meal. I’ve met Declan several times over the years, we had a particularly wonderful session of songs one late night at the Scratcher with Ken Griffin (August Wells), Brendan O’Shea and Those Sensible Shoes, passing the guitar around and singing songs for each other. Declan commented on this out at the gig. 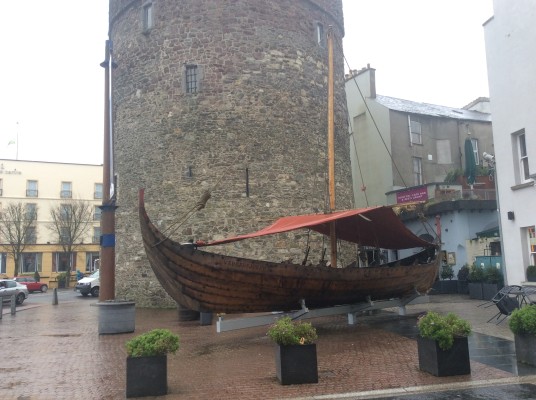 Over dinner we chatted about Declan’s recurring bear dreams. Anyone who knows me knows what prompted that conversation. We also talked a bit about music. Declan is working on two long-term projects, an album with the RTE orchestra and an album of Famine songs that he has written. We talked about the various struggles and frustrations and joys that come with carving out a life in music. Tonight’s venue was taking a cut of merchandise sales. Even though we were manning the merch table. It is another small frustrating cut into the income of musicians.
He asked me how I am getting on, I said something along the line of, “I am doing well. I have to hustle but I am surviving through music.” He gave my arm and leg a squeeze “Ah, you’re not too thin yet, you are doing alright.”
He also told me a great awful joke that involved a man losing his job, a zoo, an ape and a lion. 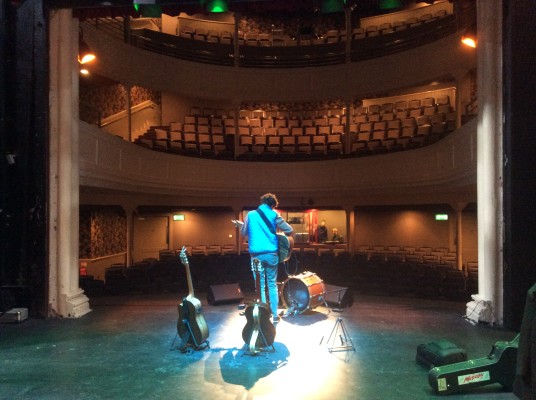 Waterford’s Theater Royal is beautiful three tiered 400 ish seat theater. I have no photographs from the gig itself as I left my device in the green room. My father came across from Cork for the gig.I knew him and Declan could trade stories from their respective researching of the Famine. I was introduced from the sound booth by Paul, the sound engineer, “From the People’s Republic of Cork, please welcome….” Which inspired my opening comments, “ That’s a dangerous introduction in the Deise, hopefully I won’t be causing to many Waterford Whispers.”
I really enjoyed my set and I did very well with CDs.
Later my father recounted with a mischievous grin that two women sitting next to him, who were clearly, and I might say understandably, there just to see Declan, stood up and left as some random support  took to the stage.
Not taking any chances with the unknown, they retreated to the familiarity of the bar. Later when they took their seats again, they asked my father, “Well, was he any good?”.
“He was brilliant, but I have to say that because I am his father.”
Sure weren’t they mortified. Pure morto.
Declan played an almost 2 hour set. I must allow that it is possible that one or two of my international readers might not have heard his music. I urge you to investigate it. Paul Weller famously said that Declan’s song ‘Galileo’ is one of the best songs written in the last 30 years. I wouldn’t disagree with him. It was great to hear this song live and to hear Declan’s introduction to the song. I suggest you go to one of his upcoming gigs for that story alone. I feel it isn’t mine to tell, and you should hear it.
It was also great to hear him play Sarah, the Children of 16, Time Machine and a boat load of new songs. “We always think the new song is the best, isn’t that right Niall?” He offers from stage, I return with a, “Yup,” much to the amusement of the crowd.
Last time I heard Declan play we were shoulder to shoulder at the Scratcher Sessions in New York’s Lower East Side. Fittingly, that is my next solo gig in New York. 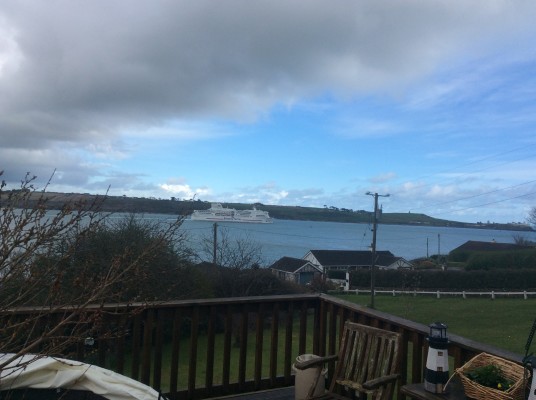 The boat to France from the house in Crosshaven.

On the plane awating take off.
Background music awaiting safety announcements.
Nothing Compares 2 U – True enough, Sinead, true enough. What a voice.
“You raise me up” – The Celtic Tenors. Waiting on the runway, I fucking hope so, I fucking hope so.
Captain Elaine Egan.
The airport sells water on the honour system, self service,  g’wan Ireland!
In flight Irish short films:
The Break.
A short film about a father and his two sons living in a tent on a beach in recession Ireland. Beautifully poignant, complex and heartbreaking.
Love is a Sting.
A mosquito vistis a reclusive Children’s Book Writer.
Lisa Hannigan sings.
Macbeth/ Michael Collins/ Miss Congeniality together at last on the Are Lingus Film choices page.
Next gigs hosting Big City Folk Song Club at Caffe Vivaldi on Tuesday and at the Scratcher Sessions, NYC on Sunday.