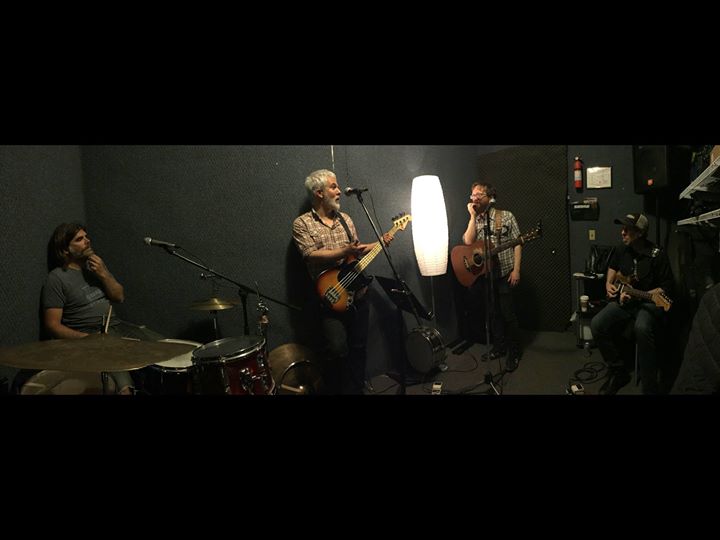 Band rehearsal photo by Dennis Cronin, also in the band and in the room.

A Walk in the Park

A saxophone player practicing scales. A fiddler playing reels. Birds. Every shape and sound of barking dog. Flowers, trees, the city in bloom. Bicycle wheels. Laughter. Football. Yours and ours. Baseball. Frisbee. Joggers. Outdoor yoga. Teenagers laughing at all of the above. Swans surveying their artificial lake. A Jewish family snacking at a bench next to two resting cops. A brightly clad, fully covered Muslim family picnicking besides bare chested and sleeveless Hispanic men barbecuing and sipping beer. A four year old black girl saying, “You’re very pretty too, mommy, the whole wide world is pretty and fancy today.” 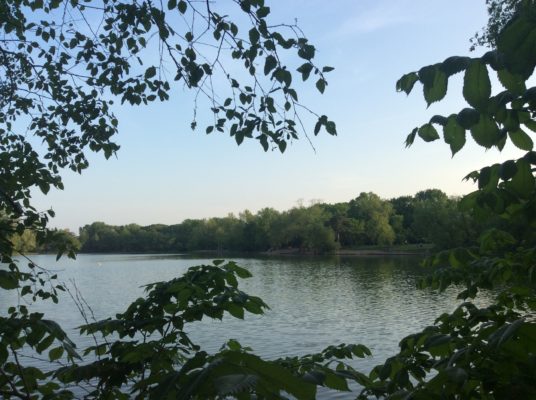 Sometimes on a Monday I play at a restaurant. It’s not glamourous. It’s not bad. I like that I don’t have to promote it or even tell you where it is. I stay in the background. I fill the awkward gaps in conversation for the first dates and the less awkward, if sometimes longer silences for the married and mortgaged. Mondays means half price wine so there are a lot of drinkers in both categories. Mondays are typically actors, bartender and restaurant workers nights off. There’s a mixed crowd. Here, in Sunnyside, Queens. Lots of Irish and lots of Asians. It  is by the far the best smelling venue I have ever played.

Tonight on my 10 minute break I talked to a guy from Tyrone, Northern Ireland. He moved here in 1984. In my 10 minutes chat with him, even allowing for the first 3 minutes being lost to me acclimatising to his accent, I learn the following:

His father ran bar and nightclub during the height of the showband era.
1000 people every Saturday night.
500 people every Tuesday night for grab a granny night.
“Grab a granny?”, ” Yup.”
“Once me and my friend who played football for Tyrone moved a horse box out the back of the club, that’s another story, and behind the horse box was two grannies and two aul fellas riding.”
My friendly raconteur is the kind of drunk that suggests a hug or a headbut are a distinct possibility. I have to listen so closely to have any idea what he is saying, that it occurs to me,  I am equally defenceless to either.
His father told him, “ Even though yer a bit of a cunt, I’ve no option, but to leave this place to ya.”
“An I loved hem an’ he loved me.. in his way”,
“I had ta tell hem, I canna do it, I’ve three warrants out for me arrest.”
“Twas only at the airport that he knew I meant it…”
“England first (whispering) – Then M15 were on my trail- so here i ahm”
“The house of the rising son”, now that’s a song, dya know that wan…?”
“I’ve a friend from Tyrone running a bar in Cork, I’ll have to tell ya the name of it next time..”

Nearby a couple of American Asian girls finish their dinner, chatting over wine, two friendly comparatively hipsterish couples sit at the bar, a shy 20 year old Irish guy is on a date or hanging with his sister, both are looking at their phones.

If you see something, say something. 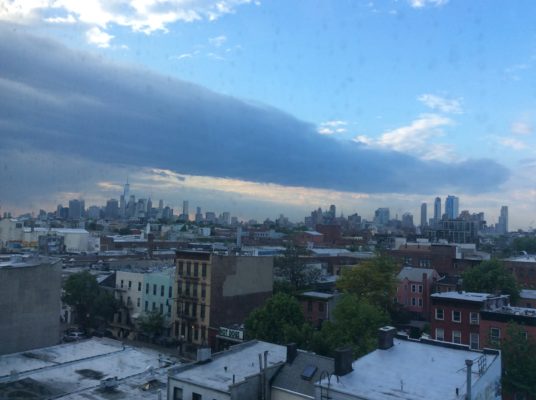 Brooklyn and Manhattan from a moving F train.

Dog Walkers of the World Unite and Take Over

That was Monday, now it is Friday. Prospect Park, 7.45am.

Debris off the coast of Egypt.

I need to make myself leave the apartment. It is easy for the day to slip away when you work nights. Spring time in Brooklyn. Spring anywhere. Our reward. The source of so many cliches and bad poetry and art. It is not my intent to add to it here.
So here I am in Prospect Park. Dogless surrounded by people and their dogs. Or maybe vice versa, dogs and their people. Dogs have it figured out. So many dogs. So many dogs names being called out into the morning.
Last night as most nights, I heard the ice- cream truck go by our apartment at dusk. For the first time in many months it seemed at least plausible that they might be selling ice cream.

By the Gowanus Canal

Chris Foley, has found a new practice space by the Gowanus canal in Brooklyn. For the first time in a long, long time we managed to find a time and space for all 5 of the band to get together and practice before the gig. The Gowanus down around 2nd avenue, underneath the BQE is the Brooklyn that makes outsiders wonder how the hell anyone could live here. A frequent location for Law and Order crime scenes, and as I noticed last night, multiple scenes  in the gripping spy series ‘the Americans’. It is an 18 minute walk from our apartment. Past the school, coffee shops, delis, tattoo artists, multiple hair salons, then left on fifteenth street, below fifth avenue, cappuccinos and kale salads are replaced by mechanics, tire repair stores and plumbing wholesalers. Close to the canal and beneath the BQE is a warehouse converted for practice spaces. It is perfect. We’ve been working new material into the set gradually for the last few months.On Tuesday we worked on arrangements for several of these:
When We Are Soil
Artificial Lake
I have a name
Sacre Coeur
Central Station
Come on in

Wednesday, May 18th, Rockwood Stage 1, NYC with the band

Beforehand I headed uptown to the Confession Box, a new bar in the Upper East Side. They want to get more music and I met with the owner about possibly trying a new song club up there. I am not certain it will work but I am going to give it a shot.

Our gig was at Rockwood Music Hall, Stage 1. We are doing a series of Wednesdays there right now. My friend Richard Young joined us on piano for ‘Central Station’ and ‘Jesus is Coming and I can’t pay the rent”. He was playing the midnight set so myself and Chris waited around for that, Chris even got up and joined him for the set.

Two fans from Germany, Wolfgang and Astrid, who saw me at the Haldern Pop Bar and and Rheinterassen Rees, were there. They brought me chocolate and the name of place in NAshville “That you have to play there, we told him and he says, yes, too”. The FRanklin. I’ve never been to Nashville, seems perfectly illogical that I might secure a gig there through some German fans.

Incidentally, Germans, and chocolate? So frequently German fans gift me chocolate. I wonder why. I am not complaining.
“Hey Dexter!!”

Bus to Boston and Back

Saturday, Saturday May 21st On the Bus to Boston

I’m listening to the audiobook ‘Heat and Light’. I just finished reading Willa Cather’s ‘O Pioneer’. How strange and sad that this country of immigrants and pioneers, is now largely so afraid of immigrants.
Yesterday and the the day before I had two very helpful phone conversations with two musician friends in New York. Sometimes I feel myself getting in a rut, spending too much time thinking about money. New York can do that. Quickly and consistently. Speaking with Michael Brunnock on the phone on Thursday and with Kyle Tigges yesterday, pulled me out of that head and back into the creative side of things.I want to put my trust in that.

I am on the Megabus to Boston, from 34th street and 11th avenue, NYC to South Station, Boston. My ticket was $10. 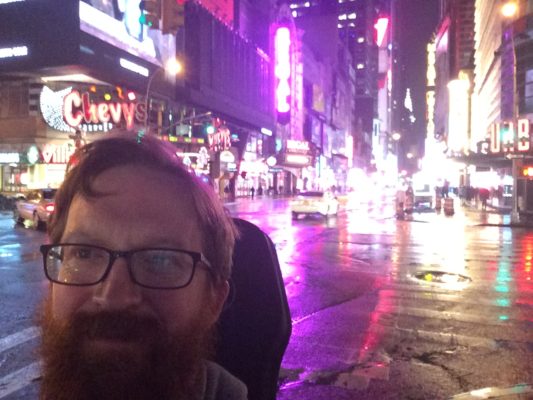 Back in NYC circa 5am Sunday Morning

The gig at Toad in Cambridge was fun, a bit noisier than usual, Paddy Saul, Kevin Connolly and Colin Campbell and his wife Sarah, Sam Locascio and Danielle, Johnny Mac, Isaac and few other friends came out. I enjoy these gigs as they are long enough to meander through my back catalogue but not too long. I sang Guy Clark’s ‘Stuff that Works”. Guy Clark, what a tremendous songwriter. He passed a away during the week. I first heard his music through Chris Michael, and I really only started listening to him seriously this last year.

The band that played after my “Luddy Mussy” were great and the venue was really rammed. I got the 1am Greyhound bus back to NYC, sleeping most of the way home. It took less than 4 hours to from Boston to New York and an hour and forty five minutes and four trains to get the last few miles from Port Authority to Brooklyn.

The Red Lion on a Sunday Afternoon

I went to Red Lion to see Ben Reel play yesterday afternoon. I used to play there twice a week for years. I have not been there much lately. And only a handful of times since my friend, Mike Tait died. Mike used to do sound and play there. I still expect to see him when I walk in. Yesterday, it felt very strange to be there. Like I was on a familiar set with a new cast of actors.

Then I saw Calvin, the cook, from Jamaica, he gave me a warm embrace. Both of us very happy to see each other. “How’s Dan Donnelly?”, “He’s great Calvin, really, really great, I just saw him a couple of months ago.”

Later I went to the Scratcher and caught Those Sensible Shoes and Clive Barnes and Luan Parle with special guest Ed Romanov. A good night. Slippery pints at the Scratcher. Time flies. Clive Barnes and I used to play the Lobby Bar in Cork around the same time. We were frequently in the same monthly gig listings, he lived on Douglas Street, when I lived on Evergreen Street, if I remember correctly. Which is by no means certain.

“I’ve got pins and needles for you” – Super Furry Animals, Fire in My Heart

On Monday I went to acupuncture for the first time. Ever. She suggested I try 3 weeks without sugar, wheat, meat ( except bison and fish?! ) and alcohol. 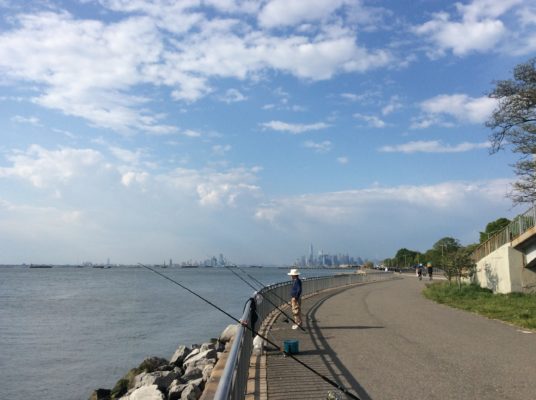 Tuesday was Big City Folk Song Club at Caffe Vivaldi. Jim from Kansas and Youth in a Roman Field featured. Youth in a Roman Field are exceptional, fronted by Claire Wellin on violin and vocals they have classical, folk, jazz and theatrical influences, but the result is infinitely better than that lazy description. Honestly one of the best new bands I have seen lately. Check them out. Jim from Kansas is a universe in of himself. A magic realist songwriter, I always enjoy the unlikeliness, the detail and originality of his songs. It didn’t hurt that he dropped ‘Places I Promised I’d Go’ into one of his songs. Anastasia, one of the staff at Vivaldi, brought her cello with her and joined me for couple of songs at the beginning and then closed the night with two beautiful solo pieces. All in all, the night was extremely varied and I enjoyed it. Even without sugar, bread or alcohol. They have very good coffee at Caffe Vivaldi.

Towards the end someone made a disparaging comment about one of my friends and I felt a primeval rage course through my veins. I channelled it all through my eyes and some very slowly spoken words. I am confident that my disagreement was very clearly understood.

In the Confession Box with Chris Michael

Tonight I am hosting a new song club at The Confession Box, 78th Street and 2nd Avenue in Manhattan’s Upper East Side. Chris Michael, one of Big City Folk’s most consistently impressive songwriters will be playing a feature set. Note this is absolutely not an open mic if you would like to perform in the future please email [email protected] in advance.