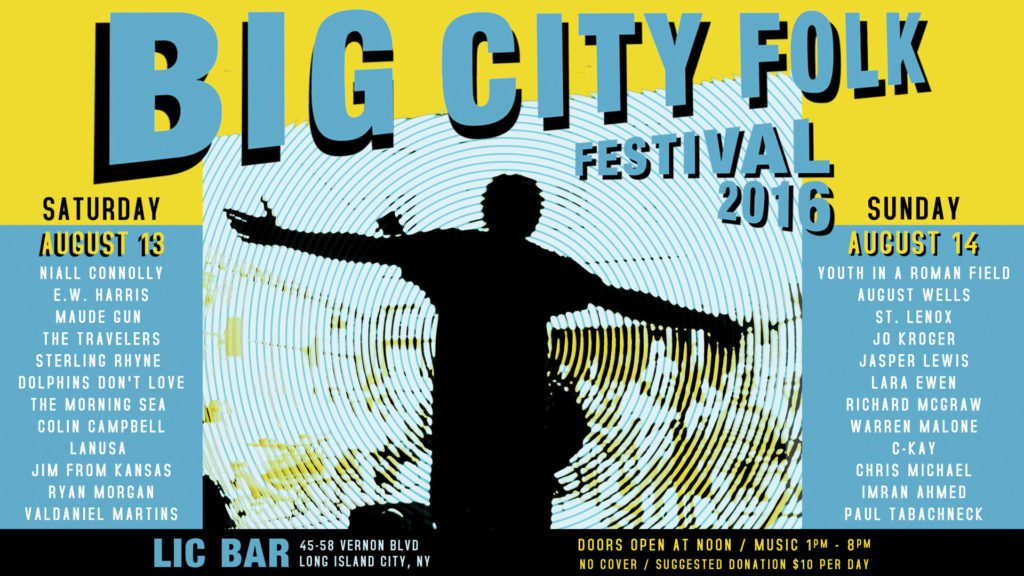 “All music is folk music; I ain’t never heard no horse sing a song,” – Louis Armstrong

Twice as efficient as the Olympics and with only half the doping—
Big City Folk Festival is back!
Big City Folk presented festivals in 2012, 2014 and we will be back at  LIC Bar this Saturday, 13th and Sunday, August 14th from noon till 8pm. I am curating and hosting the event. My band and I will be playing on Saturday at about 7pm. (Warren Malone will be joining us on guitar for the first time in ages. Chris Foley is still away on the Warped Tour with Mother Feather.)
I’ll follow up with details in the coming days about all the amazing performers we have playing. See poster (attached image) for a full list of acts. You can hear most of them on this Spotify playlist.
Remember, while Spotify is a great way to discover new music, artists make a pittance from it. If you like something you hear, please consider purchasing it online or in person.
It is almost ten years since my first Wednesday Night Song Club, initially at Mr. Dennehy’s, later at Ceol. These later spawned Monday nights at Red Lion, Tuesdays at Buskers, Thursdays at Path, Sundays at LIC Bar. After a while, the need for a name arose. An umbrella for all the events, to help cross-promote and collaborate. Big City Folk. Right now Big City Folk can be found on Thursdays at The Confession Box, and monthly events at Caffe Vivaldi and The Irish Haven.

Excuse Me, You Dropped Something?

As I was saying to Bruce Springsteen when we were chatting one time outside the Path Café, “God, I hate name-droppers.” Oh, speaking of which, in case you were curious about the potential of this weekend’s acts, past Big City Folk events have featured (before they were famous) performances from Lana Del Rey, Lucius, Christopher Paul Stelling, the cast of Once, and Oscar Isaac. Mick Flannery and Mundy have sang songs at our events. Remember that time Paul McCartney had a salad at the Path?  Or when Belle and Sebastian’s Stuart Murdoch called down to say hello and hear some of the bands. Or when Prince arrived at Red Lion moments after one of our Monday night sessions. I felt bad for him that he missed it. Yes, he was tiny. Yes, he emanated cool.

Big City Folk aims to foster a challenging and supportive environment for creativity. A safe space for new songs. Watering holes for singers and music lovers. I know of three married couples who met at our events and countless bands that formed through meetings at Big City Folk gigs. In the city that doesn’t give a shit about you, I mean, the city that never sleeps, I personally have leaned heavily on the friends and talent I have met through this community we have fostered.
As in immigrant in this Big City in this strange time, I am glad to know these folks.

Pay What You Can?

Admission is strictly speaking free. We do ask that guests consider dropping at least $10 per day in the tip jar. We’d like to pay everybody for their time and their talent.
Thanks for reading, thanks for listening,
Niall