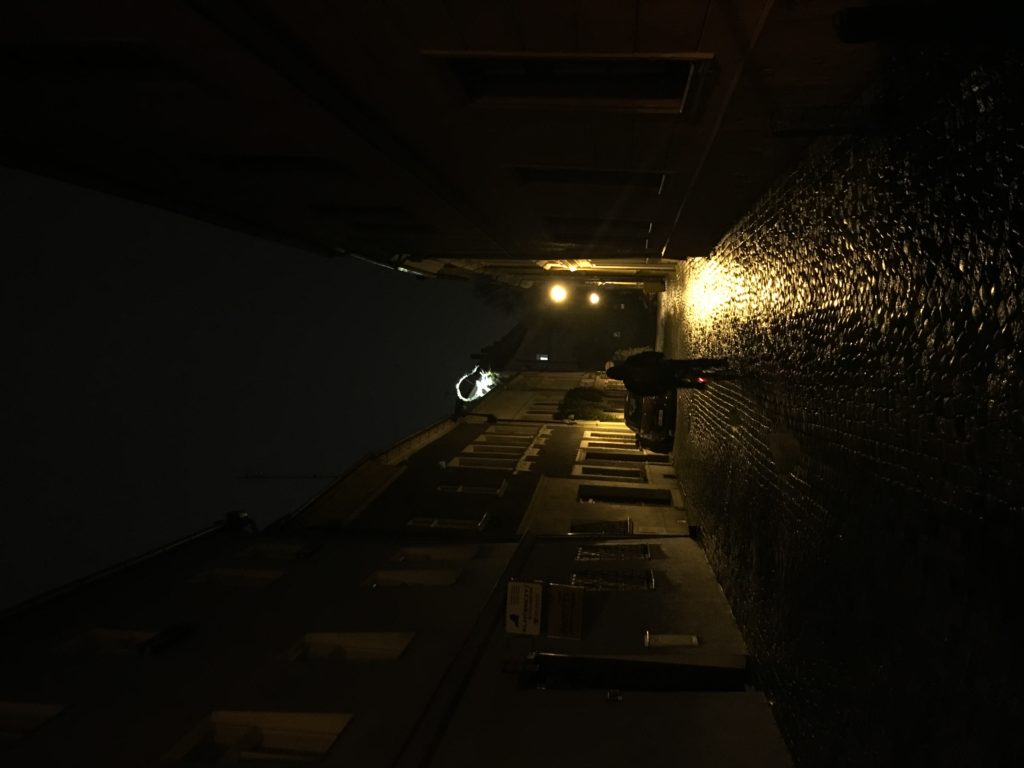 Sunday night. Two weeks and day into the tour. One week and a day left to go. My body, perhaps sensing a night off, has collapsed. I think I have slight touch of food poisoning.

Where did I leave you? Vienna on Friday night out the back room at Hotel Am Brillantengrund. Emily Kolbert / ne Joffee did a beautiful opening set. Neil brought some of his English language students. I met people from Austria, Syria, Iran, America and Libya. The Libyan was the youngest, aged 17, he’s been in Austria three years. He asked me , “Is New York as isolating as Vienna?”

And here I am complaining about a messed up stomach,

Neil’s friend’s Harold and Gray and I went for one pint after in a Turkish place around the corner. We ate some delicious salty sardines. Now my stomach is reminding me of the time I ate a prawn sandwich from a petrol station in Athlone. Athlone being the exact centre of Ireland. About as far you can get from the sea. Well, I missed my grandmother’s 90th birthday because of that sandwich. Vienna, I would harbour a guess, is a lot further from the sea than Athlone. It may have been the sardines. Or a kebab. Or thousands of miles of travel and the combination of the above.

Saturday morning I had a coffee with Neil, thanked him for all his great work, updated him on my bowel movements, bid him adieu, and took the bus from Prague to Vienna. The bus was mercifully less than half full.

Saturday night’s gig was on the quiet side but some old friends were there and I met a Czech couple whose daughter works in Cork. My friend Bara came and she invited myself and Clare to her wedding. I was really struggling with illness but got through the gig. I don’t think I ever left a venue so quickly. I know I definitely never drank so little of the delicious and very cheap Czech beer.

Sunday I visited with my friend Zuzana and her family about a half hour outside of Prague. Zuzana lived in Cork for years and it is always great to catch up with her and her husband Cormac. Cormac’s father is Indian and Cormac had cooked an amazing curry from scratch. He was somewhat concerned considering the state of my stomach but it was delicious and mild enough for their two beautiful children and one sick me. Afterwards we drank tea and chatted whilst watching x- factor with their children. Or maybe America’s got talent. Or both.

One rock and roll moment after another folks.

I went to bed at 7.30pm. I got out of bed at 9.30am. To those of you with small children or who suffer from sleep deprivation I assure I had many interruptions. Nonetheless, I think I might be a bit better. Or it might be just that I haven’t eaten yet.

This morning I heard an a radio advert for Black Friday on Czech radio. No I don’t speak Czech. The Czech for Black Friday is Black Friday. Interesting that a formerly communist country that obviously doesn’t celebrate Thanksgiving is tapping into the consumerism and cynical capitalism of Black Friday.

I’m on the train to Olomouc where I will give a talk and a performance at the University at 4.45pm and play a concert at Bounty Cafe at 8.30pm. The time before last when I played in Olomouc it was very quiet, Last time there were well over 100 people and it was one of the best night’s of my tour.

PS I decided against headlining this piece ‘ No Band on the Runs”. You are welcome.

Tuesday , November 21st, 2017 – PolskiBus pretending to be Flixbus from Olomouc to Vienna

Yesterday I gave a talk and a performance at the University in Olomouc. Last night I played at Bounty Cafe. David Livingstone, met me at hotel and we caught up for a while before the talk. The talk went pretty well I felt, nobody fell asleep anyway. Afterwards we went down to the venue and met Matthew Sweney and a few other Olomouc friends. A Finnish friend Janita who lives in Olomouc came with her daughter, her husband and her father in law.  As if bringing three generations to the gig wasn’t enough she also offered to pick me up at my hotel and bring me to the bus in the morning. Another Olomouc friend, a different Zuzana, told me that her band have been covering ‘Samurai’. I’d love to hear that.

I also met a man named Radvan Markus who teaches Irish language. in the University in Prague and Olomouc. I was hugely impressed by Radvan and his love for language. He told me about a book he recently translated from Irish to Czech. Now I am on a bus. Kindness, listeners, support, food, drink, accommodation, a packed lunch and a spin to the bus. I am full to the brim with a renewed faith in humanity and the power of the warmth of human kindness.

Driver points at my three bags.

Your narrator somewhat confusedly begins to follow instructions and carry suitcase, guitar and backpack past the luggage compartment up a narrow stairwell of the bus.

So, the warmth of human kindness and all that. Still driving a bus must be a hard job, especially when people like me don’t speak your language.

Still,  mister bus driver I’m going to put you in the blog. So. Now. So.

Also the bus is empty and has a massive luggage compartment.

Anyway, driving a bus is I am sure a thankless job and I am as you remember full to the brim with renewed faith in humanity and the power of humankindness.

Look out the window once in a while,
Wonder about the towns that pass me by,
What weather called for the angles of these roofs?
What geology for the colours of  their brick and tiles?
What politics stacked rectangles on rectangles,
Outside the old town square?

Paul Solecki met me off the train at Gleis 13 at Munich Hauptbahnhof last night and lead me to the venue. I was wrecked tired. I’d left Olomouc at 7.30am, taken a bus to Vienna, two U-barns across town to take a train to Salzburg to switch to a train to Munich. I’m always happy to see Paul, but I was especially happy to see him yesterday. Paul has arranged all of my Munich gigs in the past and I’ve enjoyed every single one of them. Paul Solecki plays in the Paul Daly band. Paul Daly owns two very successful Irish bars in Munich. Thankfully, both Paul’s felt that neither of those was the right fit for me. Instead I played a house concert style event on the fourth floor office apartment area above Killian’s bar. There were about thirty people there. A good mix of new listeners and people who had seen me before. It was an excellent room to sing in.

As I often do, I asked people to share their worst job ever stories.

A woman named Johanna from Kansas said she sold religious books in a mall in Oregon. Paddy Saul’s sister Sharon told us about picking strawberries for 2P a punnet.Her friend Bernie from Cavan talked to us about electrocuting chickens. Ralph,  from Munich, I think, gave us an extremely detailed account of working in the freezer room at a pig slaughterhouse.

Afterwards we had a pint in the back bar downstairs. The back bar is within earshot and view of the front bar. In there a  couple of hundred people from all over the world sang along to a man with a Stetson hat, a bass drum and an acoustic guitar singing “Wagon Wheel” and “Wonder Wall”.

‘Wednesday Wine’, there, that’s a good one.

I’m on my way to Rheinterassen Collins, in Rees. Another. Of my homes away from home.