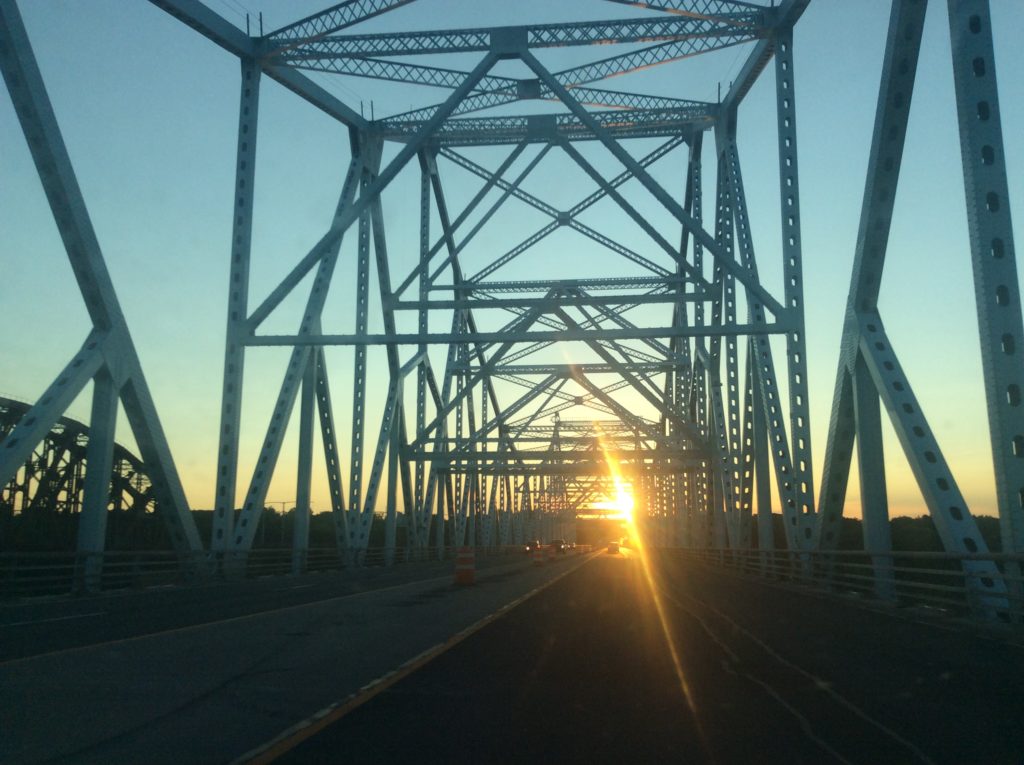 It’s a quiet time. A strange time. I’m keeping my ears piqued and my antennae fine tuned to find new stories and songs and opportunities. It’s a strange time,  an in between time, a quiet time, a divisive time, a February time, a rest stop off the highway time, a time to be vigilant about being open time.

We pulled off I-81 South about halfway between Ithaca and New York, somewhere in the Pocono mountains.  Saoirse had been politely and increasingly vociferously letting us know that she needed to be changed. I parked in front of Moe’s Southwest Grill, one of a half dozen of so rectangular businesses, that the blue signs on the highway kindly refer to as facilities, attractions and/or rest stops. This would serve as all of the above. To be fair they had a reasonably clean bathroom, a clean enough to wipe down with a wipe, put a cover on, forget your agnosticism and say prayer to the baby Jesus,  changing table . The food was about as good as you’ll get at the side of a highway. Quite a bit better to be honest.

Having gotten what we needed from Moe, Clare wisely suggested we let Saoirse stretch her legs and walk around for a while before we swapped seats and drove the rest of the way back to New York. We walked hand in hand, past a generic Italian place,  an Army Reserve Recruitment door, (TRAIN HERE!) and a Vitamin store before reaching the end of the this great big rectangle of commerce,  outside a Dunkin Donuts ( Is it already just Dunkins?). We looked out at the lot. We looked out at the six lanes of traffic. We looked at the improbable birds. I silently and condescendingly judged a sticker advertising happy hour discount lattes. We enjoyed the much warmer than Ithaca February sun, and pointed and made wow sounds at the birds.

I heard a knock from within the Dunkin’s. An old man trying to get Saoirse’s attention by knocking at the window and waving. He seemed like an interesting character. However, having the distinct disadvantage of not being a bird, it took him a while to get her attention. Eventually he did and Saoirse began waving back. I know I’ll eventually have to teach her about stranger danger, but this part of the in between time is joyous. The old man was pleased with his success and came outside.

“My legs are a bit wobbly, I’ll have to hold onto this pole,”

“Seeing you and your son made me think of walking with my son when he was that age.”

” I called him to wish him a happy birthday the other day. He’s 71 years old now.”

“Take a look at the back of my jacket.”

“I raised my kids in the roughest parts of New Jersey, took them camping and fishing in the forest every weekend in the summer, kept them away from trouble, drugs and guns, you need to get him a fishing rod.”

“Dad, promise me you’ll get him a fishing rod.”

“I have to say this quietly,  because there are a lot of beautiful women around, I’m 94 years old” ( That was him not me)

“I entertain in here, I don’t have my big one, but hey, kid, listen to this…”

Then he took out a harmonica the size of Saoirse’s baby finger and played her a tune.

His name was Francis, Francis like my father, Francis like Clare’s father too. If you pull off the highway halfway between Ithaca and NY and find yourself standing outside a Dunkin’s and hear an old man knocking from within, you know what to do.

Fri Feb 28th: An Beal Bocht, Bronx with the band