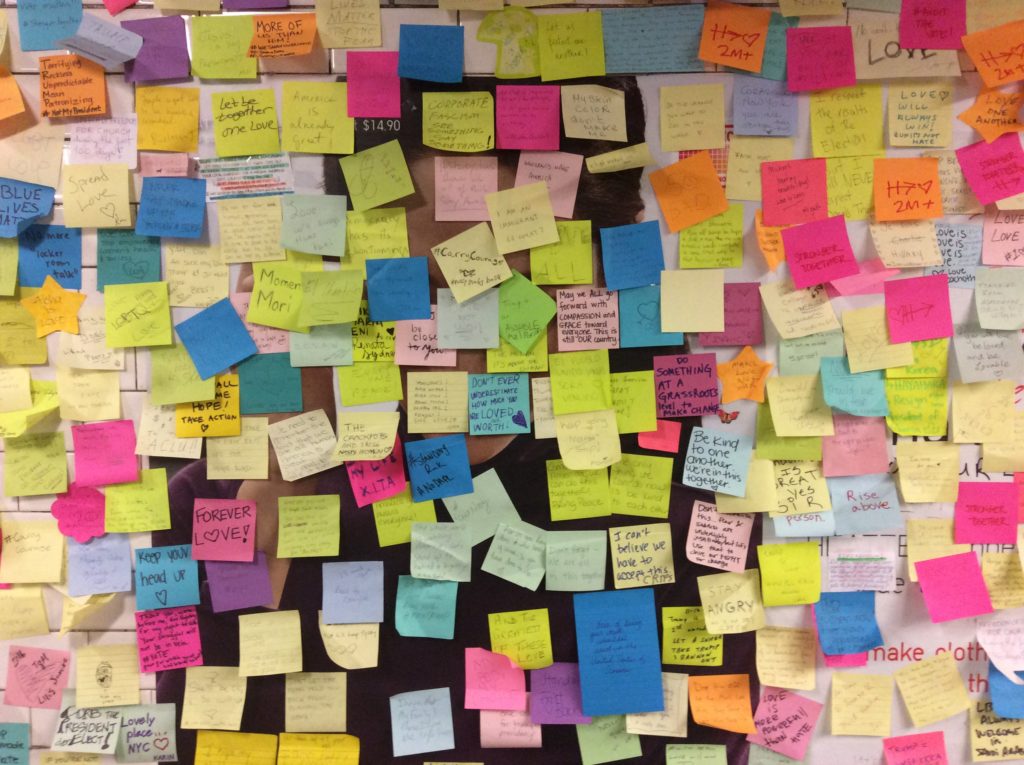 Advent in Brooklyn
Already two bottles of liquor on the counter at Meat Market. Customer appreciation, the Brooklyn-Italian way. It produces a feeling akin to the season’s first airing of ‘Fairytale of New York’. By Christmas week there’ll be nine or ten half empty bottles on the shelf. Hard liquor and sharp knives.
What a year. You couldn’t make it up.
Public Transport.
Subway stain glass. Subway poetry. And now subway post-it art.
I’ve been on the lookout for positivity. It’s still there. Between the cracks.
To the person who yelled “UMBRELLA !” at me as I attempted to orphan yet another on the subway bench, “THANK YOU!”
Tour Countdown
I leave for tour on Monday. The usual mixture of anxiety and excitement follows me me till then. I am playing every night before I go too. Who the hell is steering this ship? Oh wait.
They should all be nice gigs. I’ll be at Big City Folk Song Club at Fawkner tonight. Fawkner is at 191 Smith street. Where the old Ceol used to be. The very excellent St. Lenox features. St. Lenox writes literate, catchy, prescient indie pop songs. His songs have the density and precision of the greatest short story writing. That’s what I think. Come on down and and decide for yourself.
Tomorrow night I have  band gig at Rockwood Music Hall, Saturday myself and Chris are playing in Toad Cambridge and Sunday I am at the Irish Haven. Then Germany, Austria, France and Ireland.
I’ll wait till I get back to sample the butcher’s liquor.