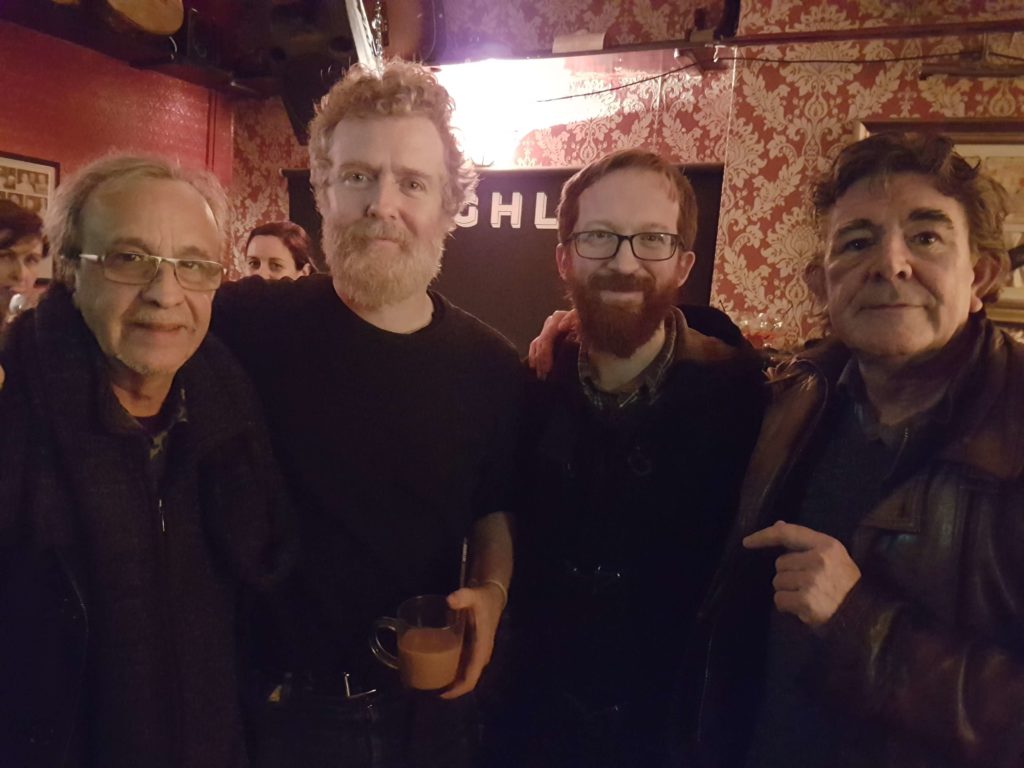 The 2.20pm train pulls slowly around the bend and out of Cork’s Kent station. Passing my old school red bricked and quiet on the hill and steadily cutting into the countryside. Wet fields and winter blue sky, naked trees, crows, cattle, puddles and bungalows pass me by. There’s always a touch of sadness leaving Cork. Exacerbated now by the festive season, good living, the end of the tour and one of the more remarkable weeks I’ve had.

Sunday night I played a lovely house concert in Waterford to 19 attentive listeners, a dog and a very curious fish. The “stage” was next to the fish tank and every now and again I’d catch his little fish eyes looking out at me as if to say “What are ya at boi?” He is a Waterford Fish after all. As fine a place as any to be a fish I suppose.

I received a text from Glen Hansard New in my trusted little flip phone. Why do I not delete the old numbers? He invited me to sing a song with him. In Coughlan’s. On Monday night. If I was free. Monday was my night off. “I would be honoured.”

Coughlan’s is a magical venue. Glen Hansard is, well, he’s Glen Hansard. To me he is a source of inspiration and hope and he has been for two decades now. I first saw his band the Frames play Nancy Spains on Barrack Street probably in 1995/96. We had a band room upstairs and sometimes we would sneak downstairs into the gigs. Sorry Liam.

Since then I’ve shared the stage with him at the Lobby Bar shortly after Mic Christopher’s death, shared pints with him at the Scratcher, a couple of times, seen him at the Beacon Theatre, seen his name on the side of buses in London and New York and seen him give an Oscar acceptance speech. I’ve seen him graft at his craft and get the recognition he deserves.

Glen was performing in Cork as a fundraiser for the Peter Mcverry trust. I assumed that it being Coughlan’s, a tiny venue for him, and it being a fundraiser Glen would be solo, but no he also had piano, strings, bass and none other than Javier Mas on guitar. Javier Mas played 12 string acoustic guitar, bandurria, laud and archilaud with Leonard Cohen.

I’ve already told you how much I love Leonard Cohen. 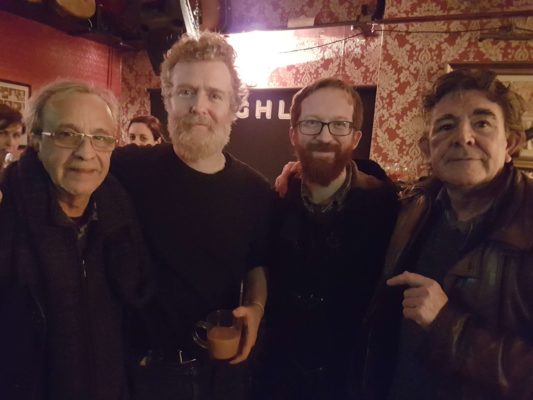 So, there I was Monday night, the wanderer back in Cork, a stone’s throw from many previous rental addresses of mine, invited to sing a song, on stage with Glen and yer man out of Leonard Cohen’s band.

12th May, 1916 – A Song for James Connolly with Glen Hansard and Javier Mas and band

Glen liked the song. A lot. He invited me to come perform it at Apollo House. Apollo House is an old unused NAMA office building. It has been occupied by homelessness activists Home Sweet Home. They have done an incredible job highlighting the desperate situation in Ireland. Regular readers of this blog or gig attendees will know that I’ve commented frequently on the huge rise in the numbers of homeless in Ireland in recent years. I sang from the roodtop, acoustic. It was difficult and amazing. Kodaline, Liam O Maoinlai, Aslan, Ye Vagabonds and oh, Hozier also played. Jim Sheridan was standing to my right and Glen Hansard to my left when I sang.

I played in Wexford later that night, Ballincollig the next night, Ballydehob last night and I am about to play in Dublin now. I have more stories and less voice than a few weeks ago.