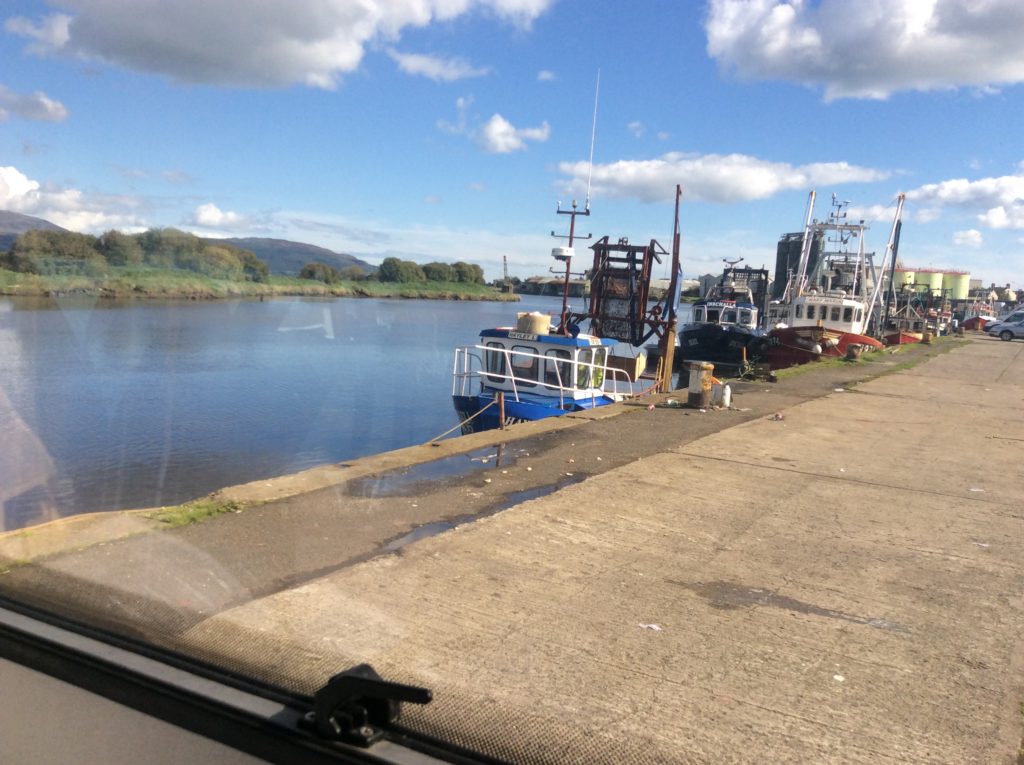 Saturday, September 23rd – In the van somewhere outside of Longford

Well? What about ye? How are things? Where was I? Tuesday I’d a lovely gig in Fealty’s in Bangor. We parked the van about a half a mile away looking out at the grey sky on the grey ocean. It was a manky wet miserable evening but I thoroughly enjoyed the gig. We arrived into Dundalk on Wednesday morning and I met up with a near hallucinating from jetlag Warren at Dundalk fm. Warren talks fairly fast at the best of times, jetlagged and caffeinated he recounted a tale of meeting Maxi -Taxi at a cafe and getting his life story in 2 hours. I got it in about a minute and a half. I had an enjoyable radio session with Padraigh. In an age of mid Atlantic radio voices Padraigh gets the prize for retaining his accent.

Myself and Charlie McGettigan this morning. The photo is good. We were just a bit blurry.

Tuesday night I played at the Spirit Store. I’d a great chat with Derek beforehand about the time he recorded Seamus Heaney. And many other things. We parked the van right in front of the venue looking out across the water. Ireland, when you try, you are gorgeous.

Maxi Taxi showed up and asked me to record a song in the back of his taxi.
No problem Maxi. Mon the Town.

Dandelion Few did a nice opening set and Warren sang a few too.Myself and Warren slept in the apartment above the Spirit Store and Mac in the van.

I had some very good food at the new hotel and the food court. We rolled on out to Derry city. The Walled City of Derry. Londonderry to some. Union Jacks. St. George’s cross. The Tricolour. Murals on both sides.I had soup. And an Indian meal at saffron.
Again, we parked about half a mile from the venue on the banks of the river Foyle. It was a cold and damp evening but there was still a sad beauty to the city lights flickering on sunset on the Foyle.

The gig was at Bennigan’s and I have to thank August Wells and Eddie Kiely for connecting me with John there. It’s a lovely spot. The first pub I’ve ever seen with a sweet shop in it.

After the gig Mac drove us to Shannonside FM in Longford where I had a 10am radio session with Charlie McGettigan. We got in about 4.40am and slept in the van. When I woke up a Saturday morning market had mushroomed up around us. You could buy a high visibility suit, a bag of greyhound feed, a Manchester City 2010 poster, a mirror and everything in between.

I wandered around that for a bit before heading into the radio interview with Charlie. Charlie won the Eurovision Song Contest in the mid nineties. He also featured ‘Dream Your Way Out Of This One’ as his album of the week on Shannonside and Northern Sounds. I was very tired but I really enjoyed the interview. Charlie told a great story (off air) about playing in Tommy Makem’s place in New York. Apparently there was a massive portrait of Tommy Makem looking at ya while you played. Charlie was a great and welcoming host.  It was also the first time I have had a song prefaced by an announcement about a missing 18 month old white bullock.

Missing? Give back the bullock ya thieving bollox.

Now. I’m in the van. Michael Stipe is singing Nightswimming.

The new now I am at the Strand Inn, in Dunmore East. We are parked. We are showered. We are fed. We are soundchecked. Someone came up and told me that ‘May 12th, 1916- A Song for James Connolly’ is his favourite song and that he learned it and sings it himself.

I strongly suspect Warren or Mac paid him to do this but I’ll take it nonetheless.