February 25th, 2017 Cambridge, MA
I read somewhere once that eavesdropping is good for writing. Hearing that gave me great freedom and shameless confidence. In eavesdropping.
It is unseasonably warm.
I’m in a non barducks coffee chain. An hour too early for being an hour early is two hours early which is just too early. I have never slipped out of NYC so painlessly on a Saturday. Or any other day for that matter. So, I’m killing a little time.
Peter Pan is a Bus
Today, this morning and last night, at least I was cursing myself for this booking. I am still a bit tired from the long trip from Munich earlier in the week. I love playing Toad but the zig zag Greyhound return trip can take it out of a man. I didn’t fail to see the irony when instead of a new shiny Greyhound bus I was on one of the older Peter Pan buses. It was mercifully sparsely and, as ever,  inspiringly diversely populated. For example: Hipster student girl with fedora a few seats in front of me. Hispanic cowboy in raggedy tassel denim carrying white angel wings and masks behind me.
Note: When I’ve asked the luggage person on Greyhound/Peter Pan if they can please pack my guitar in the separate compartment below, I have thus far been 100% successful.
The T Line
On the red line some very polite and drunk crooked toothed tattooed Boston Irish stereotypes sat down next to me. They were sharing protein bars with a bizarre tenderness and were, I suspect up to something on the fringes of legality. Naturally, I eavesdropped on them. From South Station to Kendall. Four white guys and a black guy, I noticed that a couple of them referred to the largest and whitest of the group as “Obama”.  Cell phones were swapped, a phone number written on the hand of one was was dialed by another. A meeting at a dunkin donuts near the Marriott was arranged. I imagined the rest.
They left and were instantly replaced by a Spanish speaking family that looked like they fell out of a magazine. Exclusive! How to be a the BEST looking family AND Speak Spanish!
Sipping my coffee an old man on crutches just approached me and gave me a plectrum. “Could you use this?” I could indeed. My “brogue” is detected and he tells me that he was in Lourdes and Knock on a pilgrimage when he was 7. He had polio.
“They put me in the water in Lourdes and I thought, wait a second, nothing’s happening?”
I am one stop from Harvard. Porter. On the Red Line. How fitting.
Playing Toad, Cambridge, Tonight at 7.30pm.
A band called the Library Band are playing after me at 10pm. In my fictional parallel universe world they will be an all star cast of my former colleagues from Cork City library. Dave on drums, Nigel on bass, Kate on keys, Paul on guitar and Mary on lead vocals?
Is it too much to ask? 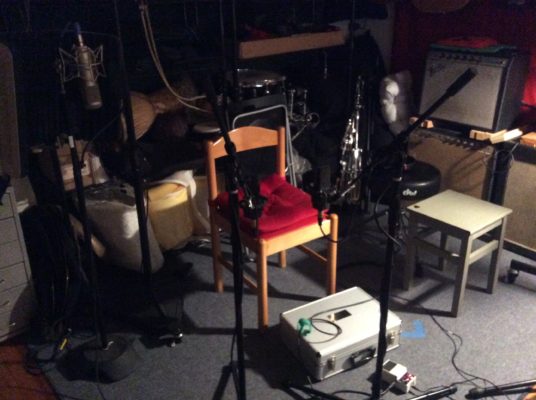 Sunday February 26th, 2017 – Brooklyn, Waiting for the F train.
Last night’s gig was noisy. Disappointedly so. Some of those librarian fans really had no library etiquette. Anyway, otherwise I enjoyed the gig. I dragged Colin Campbell up for ‘Be there if I have to Swim’ and ‘Jesus is Coming and I Can’t Pay the Rent’. Isaac, my Boston super fan requested ‘You Know I’m Not Going Anywhere’ from ‘Songs from a Corner’, thankfully he gave me a bit of notice so I managed it. No idea when I last played that one. Sometimes doing an old song feels like doing a cover version of my younger self.
The Greyhound
The 1am bus back to NY was completely full. I slept about 2/3rds the way back. A teenager called Kyle was sitting next to me. He was a little anxious. And hyper. And filming out the window a lot of the way home. He also helped me find my charger when it tried to escape under the Greyhound bus seat. Greyhound buses often have power sockets to plug in your phone, laptop, iron lung. However great as this country is you will hit a pothole the size of Ireland at some point and your plug will often fall out during the journey. Normally when you are asleep. I have been the victim of this under reported OUTRAGE many a time.
I got back to New York at about 5am and back to Brooklyn by 6.30am. In bed by 7am.

The F*** Train
Now I am waiting for the F train to Manhattan for our gig at Rockwood Music Hall. I am hoping to catch some of Lara Ewen’s set at the Scratcher first. The trains are particularly confusingly rerouted today. Far as I can tell the D is running on the F line and the F is pumpkin lion witch and wardrobe hybrid.
Who knows where or when I might end up.
A train announcement has been made. Gurglemumblewhyyoutakepublictransportyoudeafdopefoolpoormanmumblewhyarentyouabletounderstandanyofthisstatic.
None. The. Wiser. Am. I.
Now I am on the J train at Canal street. If there is anyone at our gig tonight I bet they were trying to get somewhere else. What you at MTA?
Bowery on the J train.  In ten years in NYC I’ve never been at this stop before.
Feb 27th, 2017 12.40am – Back home
Well, thanks to the trains, I missed Lara’s gig. Our gig was delayed which never happens at Rockwood Music Hall. There’s a good story as to why, I’m sworn to semi secrecy.
Ali drove myself and Chris home after the gig. Sparing us the trickery of the MTA.
Thank you Ali.
February 27th, 2017, 9.42am –  On the F train on the way to the studio
Today the F train is divided. Listening to recordings from the new album on the way to the studio. I switched trains at Kings Highway. I got on the next F train and was so engrossed in the recordings that I was back where I started before I looked up and realised had gone in the wrong direction.
I’ve been playing a blinder with the trains this week.
Subway stain glass. Someone eating the head off someone on the phone.
The man on my left and the woman on my right are both reading about the oscars mess up on their phones.
February 27th, Nighttime 2017 – The G train is a Bus
“We apologise for any inconvenience.”
The G train is now a bus through williamsburg.
I wish Sir David Attenborough would do a Williamsburg at night nature special.
Fare hikes. Another woman shouting on the phone
Lots of people standing. Zero information. Brightly lit late night shops. Dyed flowers, floridian oranges and mexican corn.
March 1st, 2017 – Crawling back to the studio on the F
“We are delayed because of train traffic “.
Train divided again. The news headlines speak of the president taking a presidential tone. Woopee.
Make America Late Again.
“Is it as bad as they say?” “What the hell is going on in America?” “Remember the 1930s”
I don’t know.
It’s a big bad complicated world and, oh, and my train is late.
Upcoming:
Tonight : Hosting Big City Folk Song Club at Fawkner with Jenna Nicholls.
Saturday- back to Boston to open for Kevin Connolly at Club Passim.
Sunday – The Scratcher, NYC.