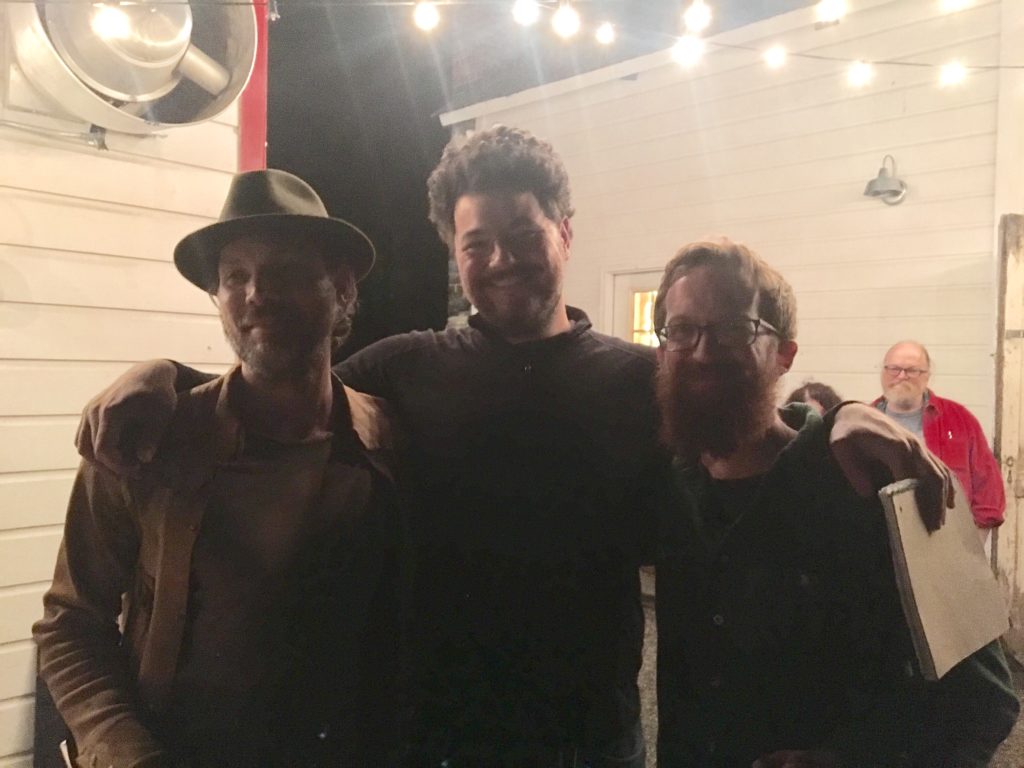 The sun is shining in Brooklyn. The President’s first 100 days. The continuous drip of bad News makes me intermittently anxious, angry, sad, determined and inspired. Frequently all at the same time.  Still we are all somewhat solar powered and warm weather brings with it some energy and something like hope.

I had a really enjoyable gig opening for Simone Felice and his brother James Felice in Palenville last Saturday. I first heard the Felice Brothers on an ‘Uncut’ music magazine free CD many years ago. A little later, not quite as many years ago, but still quite a few years ago, I remember being in the back of a van the day after a night before with Mick Flannery and his band, all of us, most of us, hungover, singing along to ‘Frankie’s Gun.’ Winding down Irish roads in December, “I think I know the bloody way by now Frankie!”

The gig was in a converted barn out the back of Circle W Market café in the tiny hamlet of Palenville in upstate New York. Sold out. About 40 people. Soft light. Wood. A small campfire burning outside. I was nervous. In a good way. It went down well. Some nights you just know that you have the right audience in a room. The kind of people who appreciate the details in songwriting. A small dimly lit barn is remarkably enjoyable space in which to entertain. I felt like I performed well and my set was well received.

At the break I met Simone who told me to “I gotta bottle of special tequila down there brother, help yourself.” I stuck to the beer and chatted with the guests and sold some CDs.  One woman told me I sounded like John Lennon and Paul McCartney together, adding ” with a touch of Leonard Cohen”. I’ll take that, I’ll take that. Don’t worry, I won’t quite believe it, but I’ll take it.

After a short break Simone took the stage with a nonchalant cool, sit down – swagger. He sings contemporary folk tales, songs that celebrate the underdog, the walking wounded, ghosts,  addicts,  drunks, winter birds. The goings on in small town shadows. Sorrow, joy, love, lust, loss, sex and death. Smiling faces, crescent moons and motel curtains. After maybe five or six songs his brother James joined him on accordion. Though the subject matter remained dark, the brotherly banter, the stomping, harmonizing made some of the darkest lyrics this side of Nick Cave sound positively joyous.  Simone jokes, “This feels like VH1 Showtime special.”

During their encore, Simone hollered “Brother, Niall, come up and sing with us,” from the back of my brain, I did find the words to take a verse and couple of choruses in their rendition of Neil Young’s ‘Helpless’, which bled into Dylan’s ‘Knocking on Heaven’s Door’.

Afterwards, Simone invited me to come and do it again. I will.