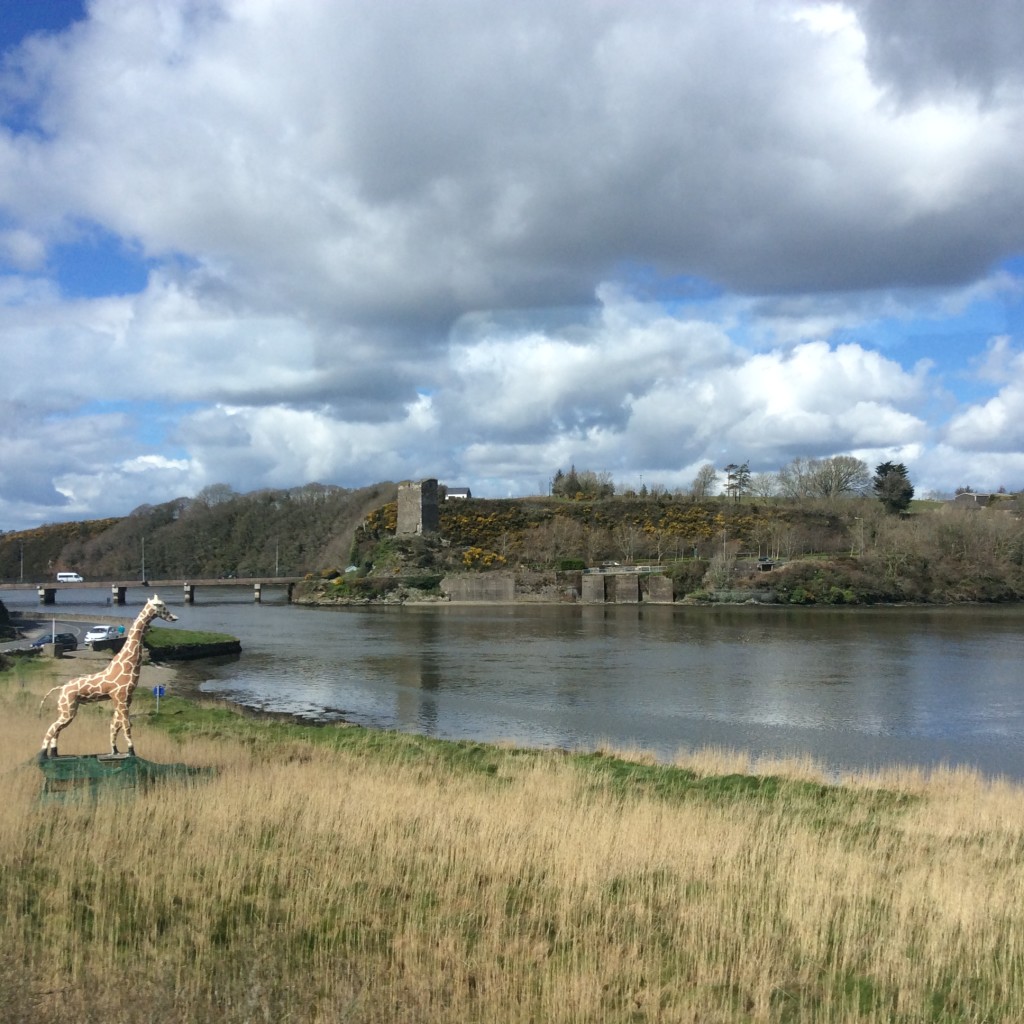 It is a glorious spring day. Ireland’s east coast is awash with yellows, browns and greens entombed in a concave perfect blue and white Simpson’s sky. After the wet and dreary weather, this is the kind of light that would give Nietzsche hope. False hope, no doubt, but hope nonetheless. In my three minute interaction with the woman in sandwich shop I was addressed as lovie, darling and honey, in the mothering, nurturing tone, that like, today’s weather, suggests, everything will be grand. 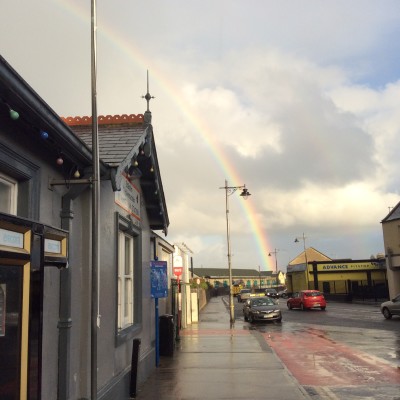 Can you tell I had a boozeless night and a good sleep?

Last night’s gig in The Sky and The Ground in Wexford was a real gift of a night for me. I am glad I came. On this leg of the tour I wanted to try out playing some places I had either never played before, or not in a long while. I played the Sky and the Ground one time, I think in 2004.
I remember that the B and B I stayed in had a sign that read, “Please don’t use towels to clean your boots.” A reasonable request that hinted at one of the under reported downsides of Ireland’s economic and building boom. The Celtic Tiger, burster of bubbles and destroyer of Bed and Breakfast towels. I also remember that I was opening for a woman named Noemi, who was a friend of Leonard Cohen’s.

I was booked by Enya Barron and Enya, Johnny and Nuala put me up for the night in the apartment above the bar. Well, technically, Johnny and Nuala’s son Caolan put me up, seeing as he was kicked out to make room for this grateful troubadour. I had offered to find a place myself, but bizarrely on a Tuesday night everywhere in town was fully booked.The gig was on quieter side but lovely. My friends, Gordon Barry, Casey Black, Mick Flannery and Wallis Bird have all played here in the past, and I definitely hope to come back. If I had the ratio of attendees to cd sales that I had last, everywhere, well I’d be a far more financially stable lunatic.

Opening the night was local duo, twins in fact, Ashley and Brandon Watson, The Ocelots, they were great. Lovely harmonies and catchy songs. They are only just 18 and I really think they are on to something. They were just back from Germany. They met Johnny Logan! Remember him from the 80s, Eurovision, or my January Tour blog. Apparently he liked to talk about his money. When one of the twins mentioned to his brother in passing that he had just bought some cheap socks ( essential for touring!!) , Logan, remarked, “If you had as much money as me you wouldn’t be excited about buying cheap socks.” I have no way of authenticating this story. But, I like it.
This is Enniscorthy – Where half of Colm Toibin’s ‘Brooklyn’ is set. Not sure where the other half of it is set…. 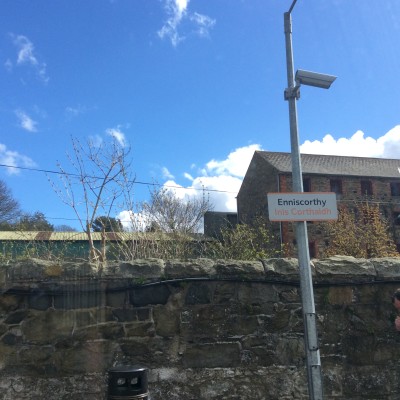 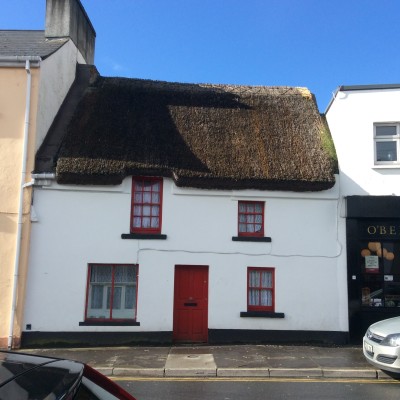 Non Irish readers may be interested to note that, Róisín Dubh (pronounced Ro-sheen dove, meaning “Dark Rose”), is named after the song of the same name, written in the 16th century. It is of Ireland’s most famous political songs in which Róisín Dubh is used as a metaphor for Ireland.

It is a great music venue. I first played here opening for the Lemonheads’, Evan Dando, a million years ago. Eugene Kelly and Chris Brokaw were also on the bill that night. Eugene Kelly is the singer with the Vaselines. Nirvana covered three of their songs, “Molly’s Lips”, “Son of a Gun” and “Jesus Don’t Want Me for a Sunbeam”.

After a great weekend catching up with family, y father Frank decided to come up to Galway on Monday too. He drove me up and it was great to catch up with him and update my French history lessons. There’s a lot more to the history of Paris’s Sacre Coeur than I knew. Plenty of bloodshed on that site before ever a prayer was said or a selfie taken. We grabbed a quick bite to eat at Monroe’s before heading back to the gig. I was concerned it might be disastrously quiet but we had a good crowd. Those Sensible Shoes ( my good friends Anthony Mulcahy and Rachel Stern) are opening for a string of these gigs. This was the first one and they absolutely nailed it. I have seen them many, many times, but tonight they were as good as I have ever seen them. The room was pin drop quiet and attentive.

Róisín Dubh look after bands well, and there was a box of beer on the stage for me. I told my father to help himself while I was onstage. And then because of my Cavan blood, i took to the stage with the bottle opener in my pocket! Sorry about that… 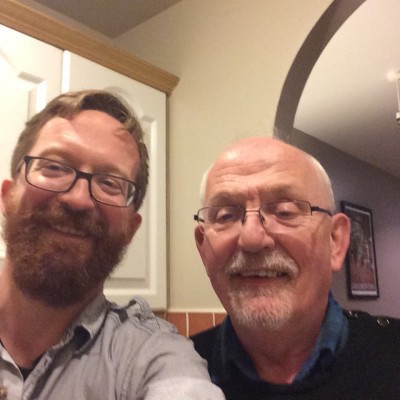 Anyway, here I am on the way to Dublin, I will get my homework in for now.

Glen Hansard has very kindly retweeted tonight’s gig so hopefully that will help get some folks out too. 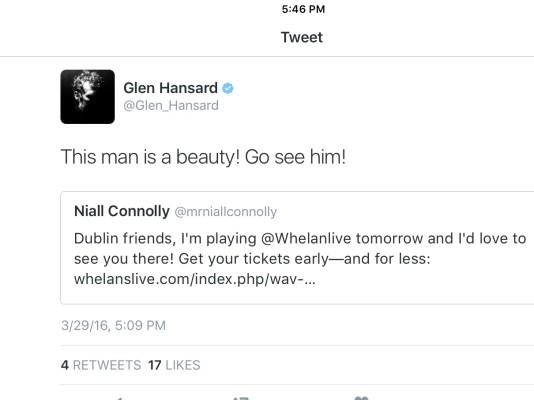 Glen Hansard – A Gentleman and a Tweeter

The train has just pulled into Greystones, a child just asked, “Mammy is this headstones?”.