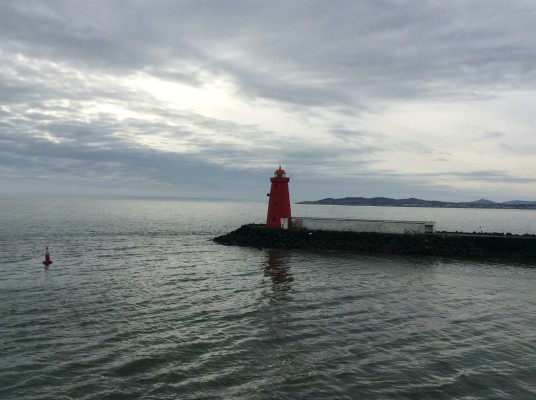 Rows of Guinness are settling on the bar. The place is full of French, German, Irish, English accents, ready for the weekend. Van Morrison is on the stereo. The staff are fantastically patient. Mike Scott sang, “Dublin is a city full of ghosts”. Never truer than now, 2016, as the centenary of the Rising approaches. 40 shades of green. 5,000 shades of grey. On a dreary March Friday, grey clouds, cast grey light on grey streets. It is the kind of grey that might be invigorating or inspiring on a cliff face or mountainside. In the city, it makes me claustrophobic. I had a nightmare set in school last night. There are far more homeless people than I remember. And it seems more expensive that the last time I was here. On the plus side, people are friendly and funny.

I saw a woman standing in the rain, sucking on a cigarette staring in the window of Budget Travel. Presumably daydreaming of a holiday in sun. Sometimes, when I keep my eyes open, songs are there for the taking.
Last night I opened for the Wonder Stuff in Dublin, the night before I opened for them in Belfast. It was very enjoyable and the band were very kind to me. The Wonder Stuff were the second CD I ever bought. Who can guess the first? So for me this was quite a big deal. It would be nice to have a time machine and tell teenage me about it. I had a good chat with the singer Miles after the Belfast gig and when I came off the stage last night he was singing my song ‘ Places I Promised I’d Go’, to himself. “Lovely, lovely song Niall”. In Belfast I watched ‘Coronation Street’ with the crew in the dressing room. It was very rock and roll. Simon, the sound engineer has a vast amount of knowledge of ‘Coronation Street’. I’d definitely want him on my team for a pub quiz. 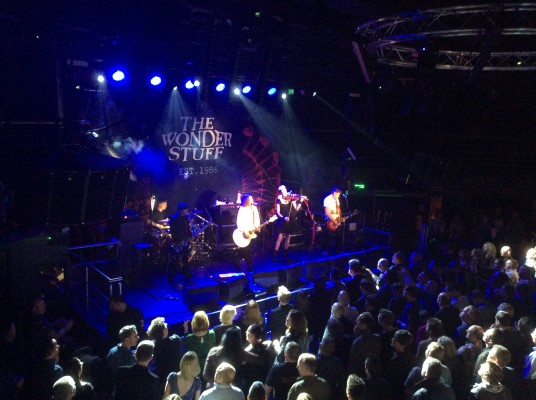 A blurry pic of the Wonder Stuff in Dublin

At the Belfast gig I met Stephen who used to have a stall at the CD and Record Fair
that would come to Cork maybe once or twice a year. I worked at it when I was in college. I’d always spend most of my wages on cds and bootleg live tapes.

My friend Dan Donnelly is in the Wonder Stuff now. Dan is a story machine. We travelled together from Belfast to Dublin and it was great to catch up. Dan played in a band called Watercress when I was in college. They were really big in Ireland and I saw them a load of times. I actually opened for them for one of my first ever solo gigs. (Fred played that night too, and for reasons unknown they performed as ‘The Australian Fred’, that night.) I saw them in the Lobby Bar once too. So good. When I first moved to New York Dan was extremely good to me. He found me a lot of work. In fact doing the Wednesday Song Club was really his idea. Big City Folk grew out of the Wednesday Night Song Club. We have played together in Ireland, UK, U.S and Czech republic. We’ve been in lot of weird and wonderful situations together. Dan’s moved to UK since. It makes me really happy to see him doing so well.

My sister Emma and her partner Paul came up for the gig. Paul, is a master finder of deals and he found an apartment for us 400 metres from the venue. The gig was good, the lights and sound were great. And it was fun to have time with Emma and Paul and cousin Zoe. 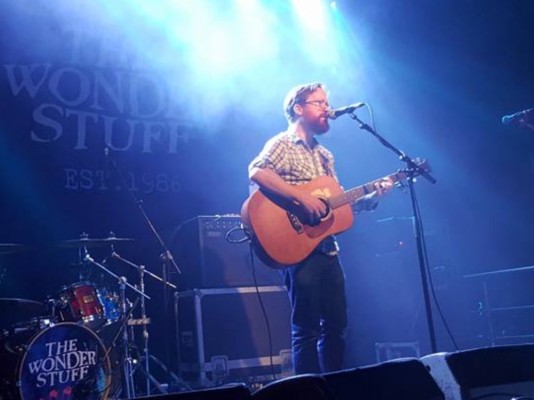 There was a guy, Ger, there who remembered seeing me at the Bodhran in Mitchelstown a million years ago. It was surreal to hear him talk about Danny Sheahan and the ‘How to Make Your Garden Grow’ gigs that I did with him and Anomie there about 20 years ago.
Declan Carey has arrived. Declan taught me my first ever music lessons. ‘Love Cats’ by the Cure on the bass. Dan was wearing a   Cure t shirt at the gig last night. Declan has also played live with me a lot over the years. He was notably with me in Brest, France the time the two guys stripped totally naked and danced in the front row during ‘ One Missed Call’, he can vouch for the veracity of that story. Should you think that’d be something I would make up.

Last night I ordered a sandwich from a spar or centra or londis type place. It was late so I was conscious of stuff being out all day. I asked the guy behind the counter what’s still fresh? He responded the glorious Polish/ Irish accent that is one of the things I love about contemporary Ireland. “Jaysus, I’d say everything in here is poisonous.”, he paused for a bit adding, “Maybe the water isn’t poisonous, but you couldn’t be sure of that either.”
I thought he was joking but I spent most of the ferry journey sitting on a toilet floating on Irish Sea.

The taxi driver this morning got chatting about Brooklyn, turns out his brother has a bar in Bay Ridge and he himself has been to the Irish Haven a couple of times. I played the Irish Haven just last Sunday. Small world. In my experiences taxi drivers cmment on the smallness of the world more than any other proffessionals Also, you will hear ‘Crazy World’ by Aslan in 2 out of every 3 Dublin taxi rides.

I emailed Declan yesterday to see if he’d be free for an after work drink. Then coincidentally, realised John Spillane was playing at the Unitarian Church so we went to see him. John has been very good to me over the years too and it’s always good to see him live.

When my first album, ‘Songs from a Corner’ came out, John sent a copy of it to his label, EMI. They sent it back to me complete with his cover letter. The letter from EMI began, “Dear Kenneth,…” Well, if I didn’t already know, I knew then that the music business is a strange one and it is best to not take anything too personally. I did like to joke at the time, that somewhere, someone, called Kenneth must have received an equally confusing letter beginning with, “Dear Niall, Call us right away you are exactly what we are looking for..”

John’s song ‘Magic Nights in the Lobby Bar’, the same place I saw Watercress, is one of my favourite songs ever written. Tonight, his song “Passage West” with its famine references, the natural reverb of the church and Flor Rahilly’s beautifully subtle accompaniment actually made me cry. He also played a new song, ‘The Streets of Ballyphehane’. 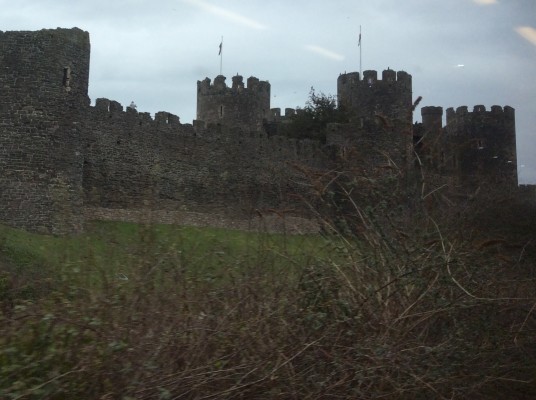 A castle in Wales

Tony Sourke was there with John. Tony promotes gigs around Kildare and I met him at the gig I did with Mick Flannery at the Olympia last year. We hung out with him at Bruxelles afterwards, just off Grafton Street, beside the Phil Lynott statue. Tony had Casey Black and EW Harris over for a gig last year. Again, I enjoy these moments of worlds colliding.

I also figured out that the guy hosting John’s gig used to play with Roesy. Roesy is in Australia these days. He stayed with me for a few days years ago in Brooklyn. He’s a gorgeous singer. Flor is sticking around Dublin today to work on mixes for the new Ian Whitty album. I’ve been waiting for a new album from Ian forever, so this is good news.

Train from Holyhead, Wales to Chester, to Crewe, to Glasgow

The train just passed a field full of spring lambs. So beautiful. How unfortunate for them that they taste even better than they look.

There are a bunch of vociferous teenagers sitting behind me, my contempt for their lack of consideration for the grumpy old man sitting next to them is surpassed only by my being too lazy to go sit somewhere else.
Tonight I am staying with my friends Lynda and Michael John. Michael John McCarthy played on ‘All We Have Become’. He used to be in band called ‘Elephant’ in Cork, and we did a lot of gigs with them. He also made two great albums with Zoey Van Goey in Glasgow on Chemikal Underground. Lynda Radley is a great playwright and MJ now does a lot of music for theatre. They are very inspirational people to be around.

It is funny how significant McCarthys have been in my life. My wife is a McCarthy. There’s Neil who I spoke about in Vienna. And Michael John. So good they named him twice.
Donald Trump’s rally was cancelled in Chicago last night as protesters and trumpeteers clashed. I just saw a little bit of it on the news on the ferry. People were actually attacking each other. With his incendiary rhetoric of late this is hardly surprising. It raises interesting questions about freedom of speech and the responsibility that comes with that.

Today began in Ireland, passed through Wales and England and now I am typing from Central Station in Glasgow.