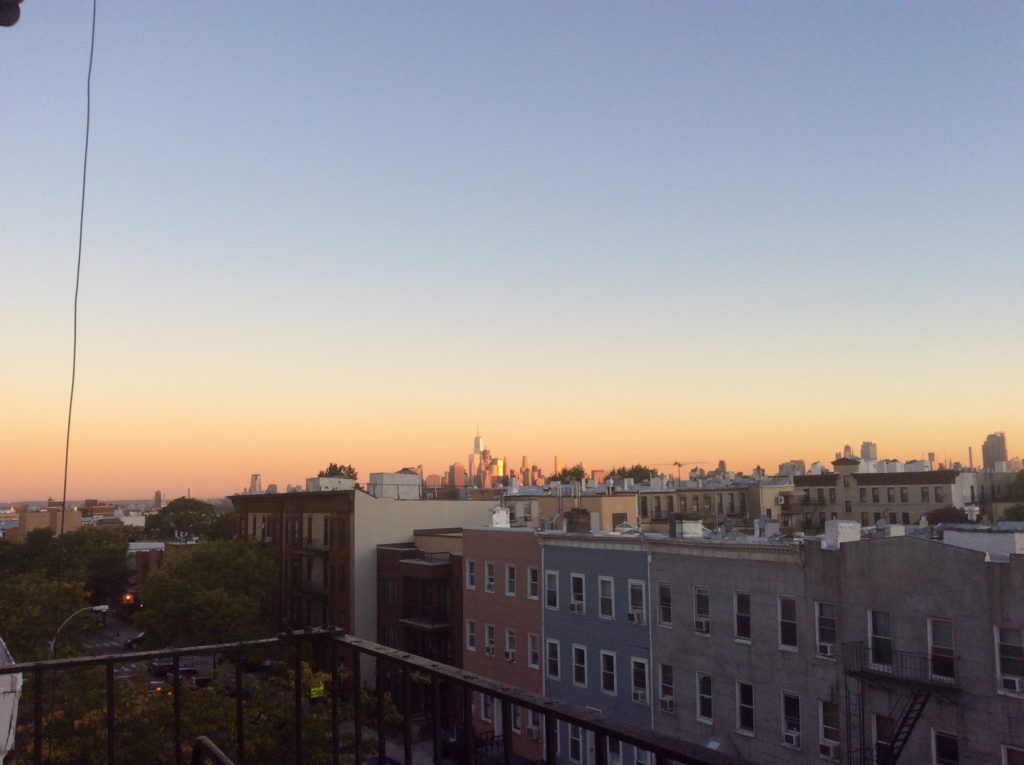 Blue skies. Autumnal Brooklyn. Temperature: 40 degrees. Feels like:”Ah fuck”. A woman in yoga pants and a puffy winter coat jogs down the street. Resembling a child’s stick drawing of herself. Not in a bad way. Tis the Season of In- Between for east coast wardrobes. A postal worker parks her car on our block. I am awake and walking before the post office opens.  I am disproportionately proud of this simple achievement. The pre caffeine sun bounces off lower Manhattan.

Today will be a day for getting things done.

Last Night in Harlem
I played a last minute gig in a lovely French place in Harlem last night.  Thanks for that Dan Saulpaugh. Maison Harlem. Two blocks or so from the Apollo theater. How often now have I been two blocks from any given city’s legendary venue? I wonder. Not out of any sense of self pity, more out of wonder. As time goes on, this existence through music becomes simultaneously more difficult and more marvelous.
This is part of my reason for writing this story down. Tours run into tours. Residencies come and go. Venues open and close. I want to know how I am doing this.
The Night Before in Becket
My Sunday night gig clashed with the political debate. Consequently it was a bit, well, sparsely attended. I am very fond of the Dream Away Lodge in Becket Massachusetts. It is both unique and successful. A speakeasy and a brothel in the 1930s. A hangout for Bob Dylan, Joan Baez and Rick Danko in the 1970s. Now it is a beautiful restaurant, bar, venue with secluded gardens in Western Massachusetts. They also have a bonfire and a real life labyrinth. I’ve talked about it before. I hope to talk about it again.
The owner Daniel is a great character and an ever greater host. No better man for the tip jar shakedown. His head literally comes through the window every now and again, reminding the audience to tip. As he does, he offers multiple variations of the following: ” I have fed him today. He will be needing to eat again tomorrow. We can all agree that that is a fair assessment and we can make that happen.” It works.
A Train Underground!
Our friends Mervyn, Saara and their children were in town from Canada this weekend. I met Mervyn in my first week in University in Cork in 1995. We’ve been friends since. The kind of friends who don’t see each other often but catch up quickly when we do. Children are frequently great at inspiring me to try to behave both more and less like a child. This family of five had driven from Guelph to New York in a car with a broken radio.  There was very little whining out of any of the children. Much less than there might be out of me. When their youngest child told me, “We are going to take a train UNDERGROUND,” he could not have been more excited if he had told me they were going to fly to the moon on a lego dinosaur. A welcome dose of enthusiasm.
Chicago, Boston, Germany, Ireland Here I Come!
I have gigs all over NYC, Upstate NY, Boston and Chicago in October and dates in Germany and Ireland in December. I’m adding new dates to those all the time. Please consider signing the mailing list on the website for upcoming news of gigs and recordings as well as exclusive content and bad joke competitions.