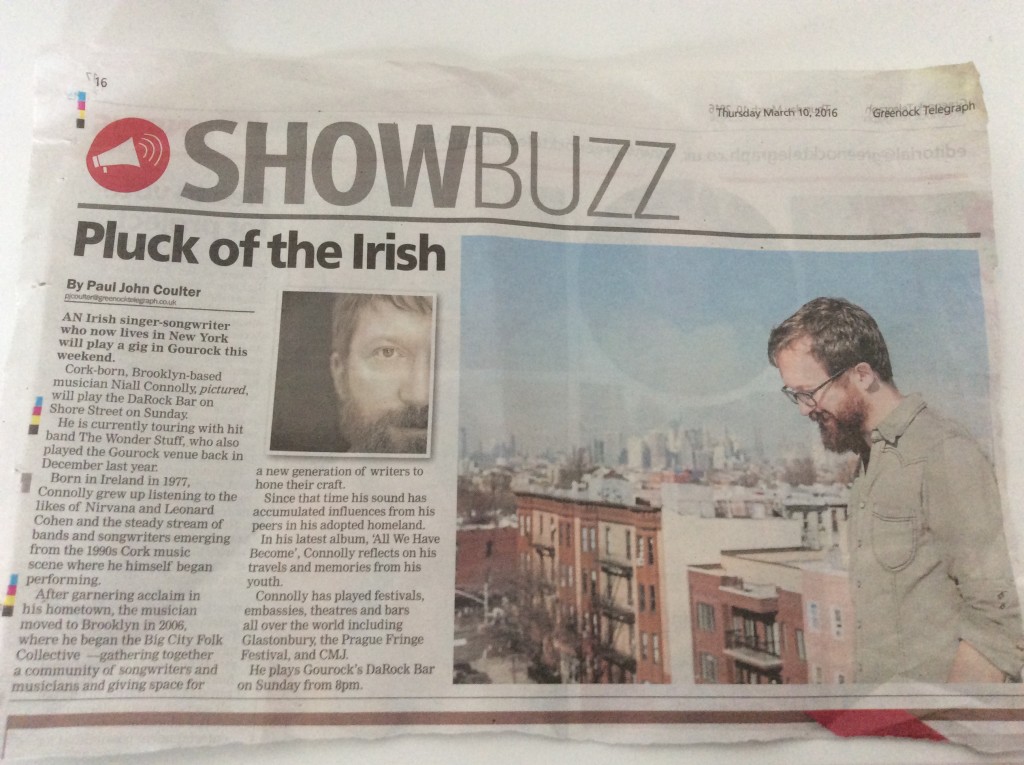 And the radio says…

United Kingdom prepares to vote on leaving the Euro. A recent poll says France would also welcome a vote to leave the Eurozone. Trump is demanding protesters be arrested.

Michael John is skyping his mother in West Cork. Little Finn is googling and ahhing along.

The 26 year old man Arnold Dimoski who crashed his snowmobile into the dogs at Iditarod says he was returning home from a night of drinking.

I am in Crossmyloof, Glasgow. Surely a contender for best place name of the tour. Tonight I am set to play Da Rock, in Gourock, 50 minutes outside of Glasgow. I had a really good and mellow night and a good sleep last night. Myself and MJ ate some really good vegan food at Stereo, near central station, we drank one bottle of beer, and went home and had some Peppermint tea, caught up and listened to some music. It was my first time meeting MJ and Lynda’s son Finn.
They are both working on a multitude of theatrical projects. They have just returned from California where Lynda has been commissioned to write a play by a University there for the Edinburgh Fringe Festival. They are also in the process of moving house and raising a one year old. I practically begged them to let me organise alternative accommodation so as not to put them out any further, but they made me feel very welcome and I feel healthy and rested again. 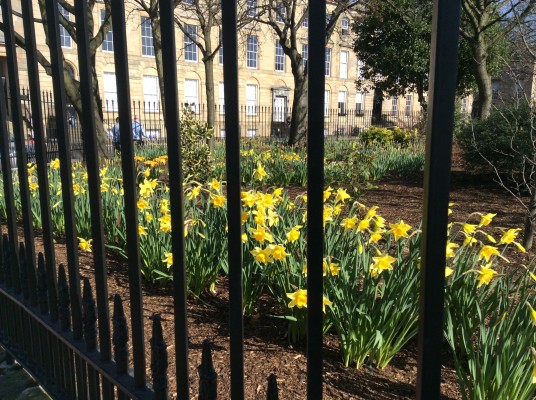 The sun is shining in Glasgow. Scottish people, like Irish people, are solar powered. When the sun comes out, people move faster and seem happier. I heard a busker on the street. From a distance he looked like EW Harris, from a shorter distance he looked like Billy Connolly, from up close he looked like neither of them. He had a strong, powerful voice and he was clearly giving it his all. I have busked in the past. Between College and various shit jobs, I did a fair amount of it, mostly in Cork, mostly late at night. I felt a karmic duty to give this guy a few moments and to search in my pocket for a couple of coins of appreciation. Then, I realised he was singing Damien Dempsey’s ,” Ghost of Overdoses’. I thought it was wholly appropriate, as in Dublin, today in Glasgow, I had spotted quite a few opiated people, slouching in sleeping bags, begging in door wells and street corners. I had a brief chat with the busker, a fantastically hirsute man by the name of Dave Campbell. Hearing my name, he asked if I was over to start another revolution. I assured him, I was only here to sing a few songs. In the following three minutes, I learned he had recently moved back to Scotland from rural Denmark. That he has lost a load of gigs for voicing his objections to a venue owner’s racist attitude towards immigrants. “I mean I told her, yer the daughter of immigrants yerself, why cannae ye not see tha?’” Ah, yes, a worldwide phenomenon, a collective forgetfulness of selective amnesia. I am here now, the jigsaw is complete, shut the door.

Yesterday at Morrison’s supermarket I heard the 4 year old son of Middle Eastern woman in the thickest of Scottish accents saying, “Mammy, remember when I was in hoshptitaaaaal, an’ you brough’ mae aaaaiiscream?” 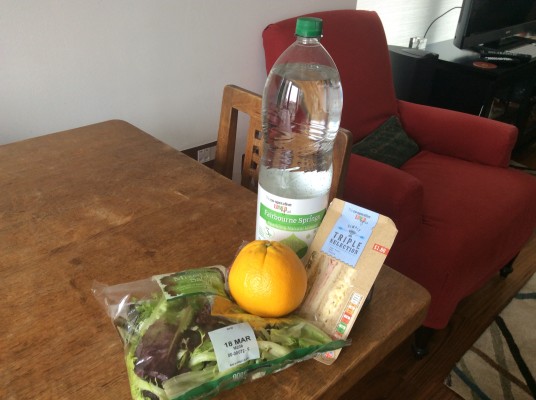 Last night I played in Gourock. The venue is owned by Tom Smith, whose brother, Graham is a regular at the Irish Haven in Brooklyn. Tom is the head off Graham. The bulb offa him! Not sure if I have ever seen two non twin brothers who looked so similar. My friend Eric Hathaway drove me from Glasgow to Gourock. It was a very picturesque drive skirting alongside the river Clyde. You get a sense of the area’s former shipbuilding glory. Before I started a woman came and politely asked if they allowed christening parties. Oh fuck, I thought silently to myself. Soon, enough 30 or so fantastically dressed and fairly tipsy folks fill up the bar. I made a few weak jokes about playing miserable songs so as not to be dishonest to the newborn about the cruel nature of the world. It ended up being a bit of a battle but folks were really sound and I sold more merch than I did at the two Wonder Stuff gigs combined.

A lovely, lovely couple Billy and Janice drove down especially from Aberdeen for the gig. Janice even managing to get her boss to cover a shift at work for her so they could make the 6 hour round trip. I promised them I would play there house the next time, and if you are reading, I mean it. I first met them at the Red Lion many years ago when Billy was celebrating his 60th birthday. Then a few years after that they were back in New York celebrating their 40th wedding anniversary and through the magic of the mailing list came to see me at the Scratcher. I remember asking them, “40 years? What’s the secret”, “Be away a lot!”, came the answer!

It was brilliant to see them, there was also another fella from Cork, Micheal who showed up, Ger who I met at the Wonder Stuff had sent him along. I love it when this happens.

Tom, the owner had previously owned a semiconductor factory in town and sold up and bought the bar, a hotel and a catamaran. Yup. He has his sons and their two girl friends were planning a trip to go and collect the catamaran from the Caribbean where it has been chartered out for the last while, to sail it back to Gibraltar for its next charter.
Proof again, that is nearly alway more interesting to listen than talk! 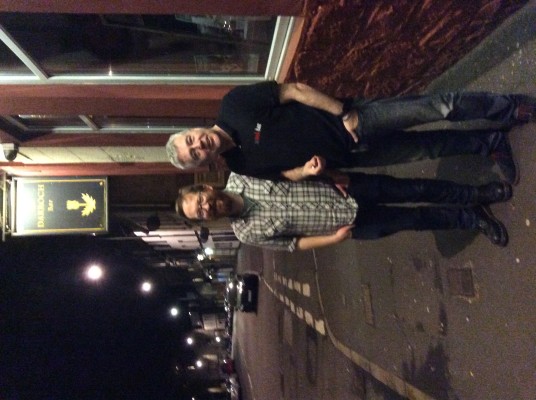 Myself and Tom Smith in Gourock

It is raining in Edinburgh. I have just had the best coffee of the tour at the Bluebird Cafe.

I had a very relaxing day yesterday wandering around Glasgow. I met my friend Mark Percival for tea at Central Station. Marc is one of these people I see every couple of years and feel like we can pick up the conversation where we left it off. Mark teaches a course on media and popular culture and I was very flattered to hear he recently used me in class, as an example of an exception of someone making a living in independent music! Last night I played the Wee Dram. Eric Hathaway, an old friend from LIC Bar, opened with an eclectic set of covers that included Howlin’ Wolf, Bob Dylan and Prince. There was a bit of spill from the sound of what sounded like a great trad session at the bar that I found very distracting while playing but otherwise I really enjoyed the gig. It was nice mix of friends, new folks and friends of friends. After two nights staying in Eric and Penny’s gorgeous apartment on West Nile Street in Glasgow, I feel rested and healthy.

This morning I got a breakfast of an orange, a bag of mixed salad, a bottle of water for 3 pounds 54 pence. Then I took my prebooked megabus from Glasgow to Edinburgh for 1 pound! I am trying to take advantage of opportunities to be frugal as I am doing lots of new gigs on this tour where my income is incredibly unpredictable.

In more predictable news, last night’s Skype conversation with Clare revealed our landlord is raising the rent on our apartment again. Despite his assurances that he wouldn’t do it it this year, when he rose twice as much as any other year, last year.

In better news the gig at Coughlan’s in Cork is now sold out. This is a great room and I have friends and family from UK, Germany travelling in especially for this. I am really looking forward to that one.

I just had a great chat with Kylie who owns the venue here. She is huge music fan and has been very kind to take on this gig at very late notice.