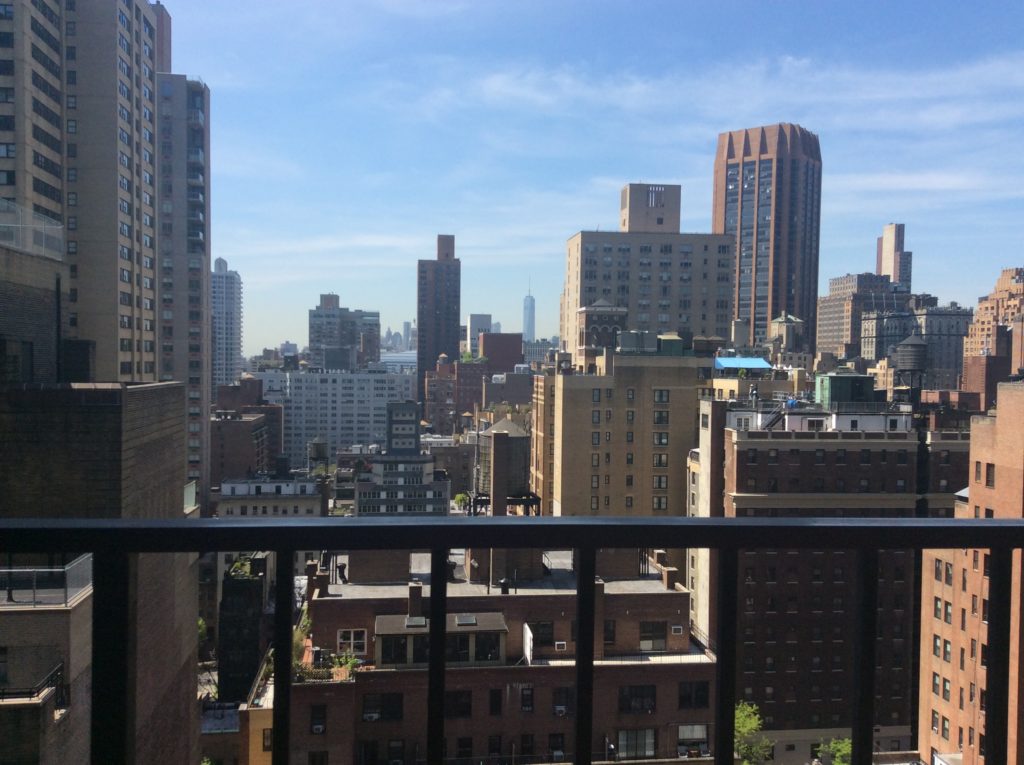 Brazil’s president has been impeached. I saw two dead baby birds on my 8 minute walk to the train. The sun is shining. I still feel like a bit of a knob every time I wear sunglasses. Thanks Bono. I am reading a book about Germany immediately before WWII.

I am on my way to Pod 39. A presumably swanky hotel in midtown Manhattan. To sing a Florence and the Machine/ Calvin Harris song for a wedding proposal from girl called Lucy to a girl called Claire. They are from Birmingham. I am not quite sure how they found me. I know Seattle songwriter Debbie Miller was the last link. No, I don’t normally sing covers. No, I have never sung Florence and the Machine ( in public) before. But, now that Ceol is closed, the Path is closed and my rent goes up and up, my regular gigs are thinning out and more and more irregular ones keep popping up. After my recent forays into gardening, this is not dissimilar to weeding. Not that the regular gigs were weeds. My friend Eric Hathaway has a theory, or a motto I suppose, that 30% of the day must be left to chance. It is hard to do that as a self employed musician in ExpensiveTownUSA but now that I involuntarily put in that corner, I am open to suggestions. So, here I am on the F train to the 6 train to midtown. To sing Florence and the Machine for two strangers. One of whom will be proposing to the other. Did I mention this is on a rooftop. Jesus. I hope she says yes.

Also, this is a remarkably romantic set up for a proposal, and who doesn’t love a good romance?

“You took my heart and you held it in your mouth…”
Later I am playing at an event to mark the 100th anniversary of the great Irish leader, James Connolly. Executed while wounded and tied to a chair by our neighbours to the east for his part in the Rising. What an honour.

Two very different gigs with a few hours in between. 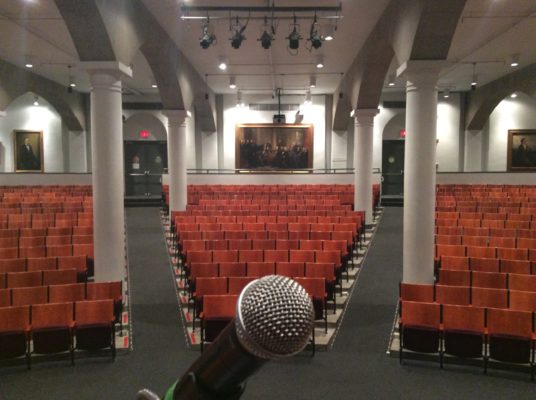 The Stage at the Cooper Union.

Later, I headed to The Cooper Union for the James Connolly Commemoration Event. When I got there the security guy at the desk didn’t know what I was talking about. This is not untypical for large venues but it is always discouraging. I was apparently far too early so I headed down to the Scratcher to meet my friends Brendan O’Shea and Michael Brunnock, also on the bill. Together we ran through,’Freedom’s Volunteers’, a James Connolly song that we were to close the evening with. The commemoration was organised by the great Irish singer Susan McKeown, as part of the CualaNYC Festival, a festival of Irish Culture and Arts, curated by Susan. I wrote a new song for the occasion. I wrote it from the perspective of Nora Connolly, James Connolly’s daughter. It was inspired by an interview Susan sent me. I am always a bit nervous before playing a new song. Playing a new song for James Connolly on James Connolly’s 100th anniversary in the place where he spoke in 1902 added to my nerves. My being 11th on the list didn’t help either. 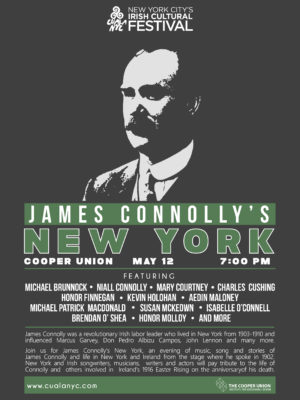 The Remarkable Story of Captain Robert Monteith
For this writer, Dr. Charles Cushing and Michael Patrick MacDonald provided the highlights. Cushing is the grandson of Robert Monteith. He told us a little of the story of Monteith and his association with Roger Casement. Monteith was with Casement as they tried to smuggle guns into Ireland from Germany for the Rising. Coming ashore in Banna strand in Co. Kerry, Monteith left the exhausted and ill Casement and went in search of help. When he got back Casement had already been captured. Monteith then went on the run himself and lived mostly outdoors in sheds, fields and barns from April to November. Eventually he was taken in and nursed back to health by the Capuchins in Rochestown, Cork. Later he was smuggled to Liverpool, where he got a job on steam ship, earned his passage to New York. Approaching the harbour he jumped ship, swam ashore, took the crosstown bus to 14th street and the train to 110th street where he was reunited with his family.
And I thought my green card application was difficult.

Michael Patrick MacDonald is an author from Southie in Boston. He read from ‘All Souls’ about his family’s struggles. MacDonald, 50, has already lost 4 siblings. He read a passage from his book recounting the horrific tale of how his 13 year  old brother was wrongly accused of killing his best friend. He also made a point of speaking of his family’s struggle and Ireland’s struggle within the contemporary context of struggles for freedom, equality and social justice in Palestine, the homeless, the lgbt, black and hispanic communities. The poor and displaced are not the stuff of history.

It was a real honour to be part of the evening. Here’s the lyric for the song. I will post video if I can track it down.

My Father fought for justice, for our country to be free,

He was my father first and foremost, and I sat on his knee,

I remember his voice and the words he said to me,

Before my father he went down, down in history.

Said the Mill owner to the Factory girls, there’ll be singing here no more,

Well the factory girls in unison, the walked on out the door,

As long as we have voices, our voices will be king.

“That boy he tried to take the bullets meant for me,

As Long as we have boys like that, our country will be free”

The Prisoner Connolly, his wife and eldest daughter requests,

Dublin under curfew such a strange and sorry sight,

Oh Lily you know, that this means goodbye,

Said the nurse I am bound to search you but I don not think I can,

I see not prisoner but virtuous and brave man,

There is little I can do now, I will do what I can.

They carried my wounded father tied him to his final chair,

Said Father Aloysius, for your killer say a prayer,

My father fought for justice, for the workers to be free,

He said I pray for all men who must do their duty,

Said my father to the factory girls, your cause is just and right,

When you back in sing your song out loud and proud, 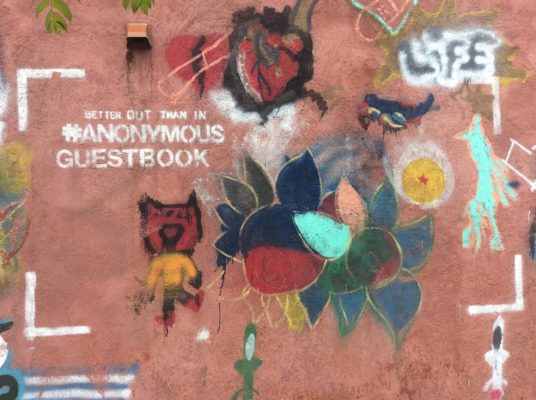 I drove to East Durham and back this weekend, all the way up and all the way back. I am a new driver. Newish and I normally, often, no, normally, no, always, chicken out for a portion of the drive, frequently, often, no, normally, no, nearly always, “letting” Clare do the getting out of the city part of the drive. But finally, this weekend I drove all the way up and back. It felt good to do it. The number of potholes and assholes on the road is directly proportionate to a driver’s proximity to New York City. Last time we were upstate we planted a few vegetables and put in a fence. The local hardware store owner told me, “ Yeah, last year my husband put in a fence and we came home one evening to see a bear lying on his back rolling around in the garden.” I won’t give up the night job just yet…

Richard Young and Kilcool at the Scratcher

Last night, having successfully navigated the journey back to Brooklyn, I ran out the door jumped on the F train to head into the Scratcher to see my friend Richard Young, yes that Richard Young, the one from England, yes, the one who’s cat shat on my toothbrush a month and half ago or so. Richard is in the lead for best shit stage joke I have heard in a long while. “Apologies for all the cursing, I am doing a short tour and have developed Tourette’s”. Rich was great.  Next up was, Kilcool, fronted by Philip Marshall an Irish man based in Woodstock. They were really great echoes of early Neil Young and My Morning Jacket. I bought their CD and I look forward to absorbing it on my next drive.

Afterwards, my friend Brendan pointed out that the bearded man in the front row was REM frontman, Michael Stipe. After much will I won’t I- ing? I said a quick hello, apologising for the interruption and trying not to sound like a gushing teenage girl. He was friendly and asked me my name. I must have included that “I sing here too” with my name, as he told me to “keep singing.”

‘Out of Time’ was the first album I bought and I still have the Best of REM in our car. It is strange as a grown up to be so excited to meet one of your teenage heroes. Yet, I am not about to pretend I wasn’t excited. I still am.

Oh, also, he was wearing a Bernie Sanders hat.

If I had a smart phone I could have proven and ruined this moment.
Oh, I finished that book about Germany in the 1930’s, ‘In the Garden of Beasts’, excellent. Heartbreaking. Infuriating. Excellent.