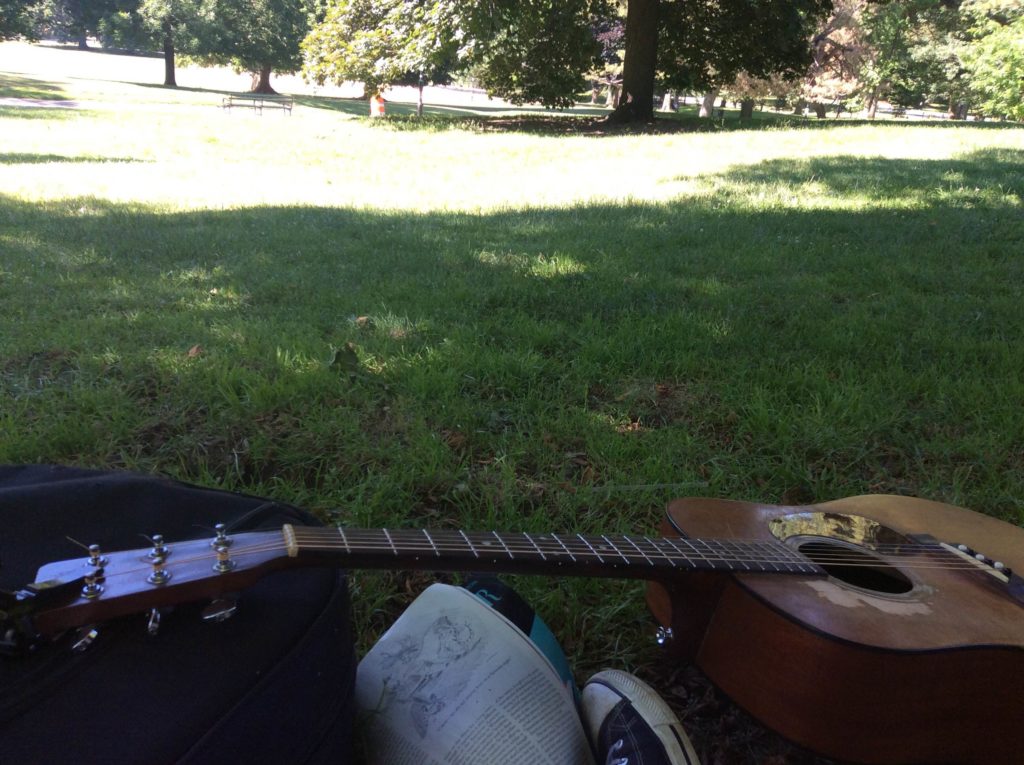 “What’s so funny about peace, love and understanding?” – Elvis Costello

She said. He said. C & T, incessant on the radio. The FBI investigates the shooter. The politicians scramble to make what they can from the bloodshed. Like butchers wasting nothing from the slaughter. The worst mass shooting in US. And sadly, that is the most surprising fact to me. None of this surprises me anymore. If Sandy Hook didn’t lead to significant change or even significant discourse, it is hard to believe anything will?

( This evening as I edit this, there is talk of a filibuster to try and make congress vote on passing a laws to make it illegal for those on terror watch lists to buy firearms, why is this point even a debate?)

And so, on it goes. I turned off the radio, and retreated outwards, from the stream of sorrow, out into the world.

I am in Prospect Park, my back against the bark, sitting in the shade. I have been running through some songs for the gig tonight, working on a new one, sipping coffee and doing a little reading. It is a beautiful morning, the dog walkers, the runners and cyclists are out in full force. I just finished reading a great New Yorker article:

‘ Citizen Kahn: Behind a Muslim community in northern Wyoming lies on enterprising man- and countless tamales’ by Kathryn Schulz.

I am 3 and 1/2 weeks into this sugarless, wheat free, meatless, beer-less cleanse. I’d be lying if I said I felt infinitely better. I feel better, some of the time. Frequently, I feel like a moody 13 year old, ‘what the fuck are you looking at, you smiley dog walking happy family in the park?” type. You know the type. It is particularly attractive in a grown man. I am hyper briefly and then exhausted. Yet, I am certainly sleeping more solidly, I have lost some lose-able weight. I miss toast and beer the most.

Last night I saw Beth Orton at Le Poisson Rouge. I won a pair of tickets. In the Autumn of 2003, I got a pair of free tickets to see her and M Ward play at the Half Moon in Cork. My friend Taf was doing lights that night, and some of their gear had been mislaid in transit. So I leant M Ward and Beth Orton a couple of capos in exchange for a couple of free tickets. Afterwards, Beth’s manager came and looked for us and thanked us. I had a beer and a chat with her and M Ward. Beth was lovely, gracious and friendly. We chatted mostly with her. Matt was very quiet that night but he did pass me a smoke at one point. Then I was very, very quiet too. It was the retelling of the first half of this story that won us the tickets for last night’s gig.

Last night, 13 years on from the Half Moon, Beth Orton was incredible. There is nobody like her. Her voice is as strong and unpredictable as a storm wave. I know it will reach the shore but the path it will take, the peaks and troughs it will negotiate, is unpredictable. Technically speaking she does not have a strong voice, it struggles to hold tune, it can be frail and yet it is hypnotic and powerful too. Tonight accompanied by two of the most resourceful sidemen in history, she offered up a 75 minute set,  mostly songs from her new album, ‘Kidsticks’, whilst indulging her fans with the older hits “Stolen Car’, “ Central Reservation” and ‘She Cries Your Name ‘. Her encore included a lovely sparse, powerful solo rendition of “Wish I’d Never seen the rain”

She’s on tour in US now and well worth catching.

1.30 something pm, a sunny Monday in Bay Ridge, Brooklyn, I entered the Pour House in search of the last 20 minutes of the Ireland Sweden Euro2016 game. My eyes adjusted to the sight of the ball sailing past the Irish goalkeeper and Swedish fans erupting in celebration. There were precisely 3 other people in the bar. The bar tender, a postman with a pint of lager and a Vietnam veteran with a pint and shot of vodka. I know al this because the match was on silent and I am a good eavesdropper. When I ordered a seltzer, the bar tender, said verbatim. “I dunno, eh, give me a dollar I suppose, nobody ever asked me for a seltzer before.” My entrance from the sunlight into this dark and almost empty bar, coincided exactly with Sweden equalising by virtue of an own goal. Clark’s intended headed clearance becoming instead an impeccable finish. Had it been on the other end of the pitch it would be a contender for goal of the tournament.

This is not the first time I have felt a strong personal connection to Ireland’s sporting successes. Or lack thereof.

In 1988 Ireland beat England in Stuttgart, thanks to a Ray Houghton goal, some Packie Bonner goal keeping and my suffering on account of a recent very painful operation. I had little doubt that Ireland were winning cos I had suffered. Consider it a mix of delusions of grandeur, trauma and Catholicism. Suffering bringing greater good and all that. Then Ronnie Whelan scored against the Soviet Union, what goal. We only needed a point ( a draw)  from the final group game against the Dutch. Then Marco Van Basten scored for Holland in that trippy orange shirt, and in doing so, he knocked Ireland out of Euro 88. I knew then what Elvis, the Beatles and Roy Orbison were talking about. 11 years old and utterly heartbroken.

In 1990 in Italy we did well because I had done 144 solos without dropping the ball, or because I had memorised the names of all the players on all the teams, or because I had sat on my hands and hoped. Because I had gasped in time to my father’s yelling at the television. Because I had concentrated on putting the leap in Packie Bonner’s jump, the accuracy in David O’ Leary’s penalty finish. “A nation holds its breath…”

Then Scillaci…that talented fucking Italian, knocked us out. “Yesterday, all my troubles seemed so far away..” I was 13.

We were knocked out of the 1994 world cup in the USA because myself and my teenage friends drank some of another friend’s father’s Smithwicks cans. Said friends will remain nameless, I don’t want to implicate any 38 year olds for stealing beer from their father when they were 16. Especially, when I helped them drink it. There is no statute of limitations in such cases.

When Michelle Smith won those swimming medals in the Atlanta Olympics, I was working in for Sitzmann transport in Erlangen, Germany. I hung the front page of the Irish Times in our lunch room. My co workers had been goading me that Ireland never won anything at the Olympics. I learned the meaning of hubris when those medals were taken back as Smith disappeared in a cloud of doping allegations. With equal speed and marginally less humiliation I quietly removed the Irish Times from the noticeboard.

At least in the Pour House, in Bay Ridge, nobody knew or cared that it was my fault that Sweden equalised, nobody except me of course.

Ireland play Belgium at 9am EST on Saturday morning.

Rockwood Music Hall, NYC with the band and special guest Steve Goulding on drums. Steve is in the Mekons and has played with Elvis Costello, The Cure, David Bowie, Laura Canrell, Chris Mills, Graham Parker and the Rumour, The Waco Brothers and many more.