I am in the back of the car on the way to Saarbrücken. Well Saarlouis, outside of Saarbrücken. The sun is trying to shine. Jack Lukeman is on the stereo. Mel and Ulf are driving. I’m feeling a bit tired but feeling pretty good about the tour.

We are passing through Trier by the Mosel river now, quite close to Luxembourg.

Ian Whitty on the stereo.

Since I last took the time to type. I played Rheinterassen Rees. One of the places that feels like a  home away from home. I had some really great meals and good coffees on the terrace there as the barges made their way up and down the Rhine. Mac went back to UK driving from Rees to Bishop Auckland in 13 hours. Guido, one of the chimney sweeps, drove me to the next house concert. “It is raining I cannot go more than 160km/hour.” That house concert was fun and full. The hosts , Susanna und Reiner’s house was absolutely perfect for music. A lot more suited to music than many official music venues I have played over the years. Reiner, ein Tischler/ Carpenter had even built a small stage for the occasion. Ron Diva, a songwriter from Bielefeld opened the night. He was a very nice guy and I enjoyed his set of all German songs. Afterwards we stayed at Bea and Guido’s house. 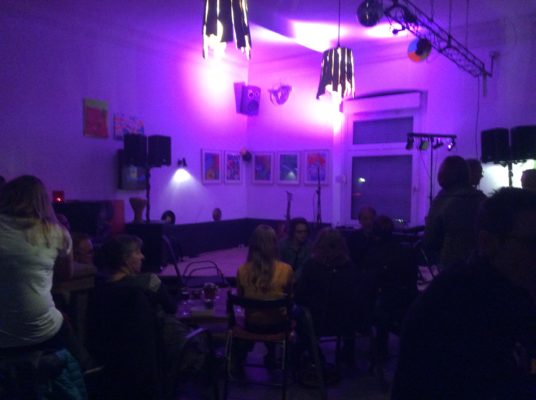 Culucu an hour before the gig.

Who are these people?

I’d a very early start yesterday to get back to Dingden for a private morning concert in a french cafe. I love this place and I love doing daytime concerts. I sold a few Cds and ate some magnificent cheeses. And drank yet more coffee.

After the gig I felt like I might turn into a sobbing mess of exhaustion at any moment but I made some semblance of an effort to hide that. I retreated to the attic in Rheinterassen Rees and had the power nap of my life.

Later on I’d another gig just outside Kleve at a place called Culucu. It was my first time playing at this venue. The first thing I saw upon walking in the door was a poster of Warren Malone. “He’s a very good musician, this guy,” said the owner, George. “Yes, I know.” George was a tall friendly strong looking gregarious German who reminded me very much of my friend Richard Young. Myself, Mel, Ulf and John were treated to a good hearty soup and some strong coffees.

The gig was incredible, 120 people showed up. I saw some familiar faces from the years of playing nearby and an awful lot of new people too. The crowd were receptive and generous with their voices and their money! It was a really, really enjoyable performance.

Afterwards I slept all the way to Cologne where Mel and Ulf put me up for the night. Yet, again.

On the road from Rees to Kleve we passed an unused Nuclear power plant that has been turned into a convention center, bowling alley and hotel. We also overtook a seven car wedding convoy.

February 20th, 2017  – Train from Saarbrücken to Munich via Stuttgart

I’m on the train. I love Deutsche Bahn. Like a crying baby I am comfortable in motion. In Saarlouis train station I saw a young immigrant teaching his father German as we waited for the train. What ya think of that 45?

Last night I played a house concert at Nina’s house. It was my third house concert in this area and my second at Nina’s house. She requested ‘Tomorrow on the Train’ from the Future Tense. Thankfully I had time between the request and the performance to find it in the back of my mind. I actually had to go look up the lyrics online. I played Pete Seeger’s ‘If I had a Hammer’ as my encore.

I am back at Eine Welt Haus in Munich tonight. Then back to USA tomorrow. Upcoming gigs in Brooklyn, Cambridge and NYC.