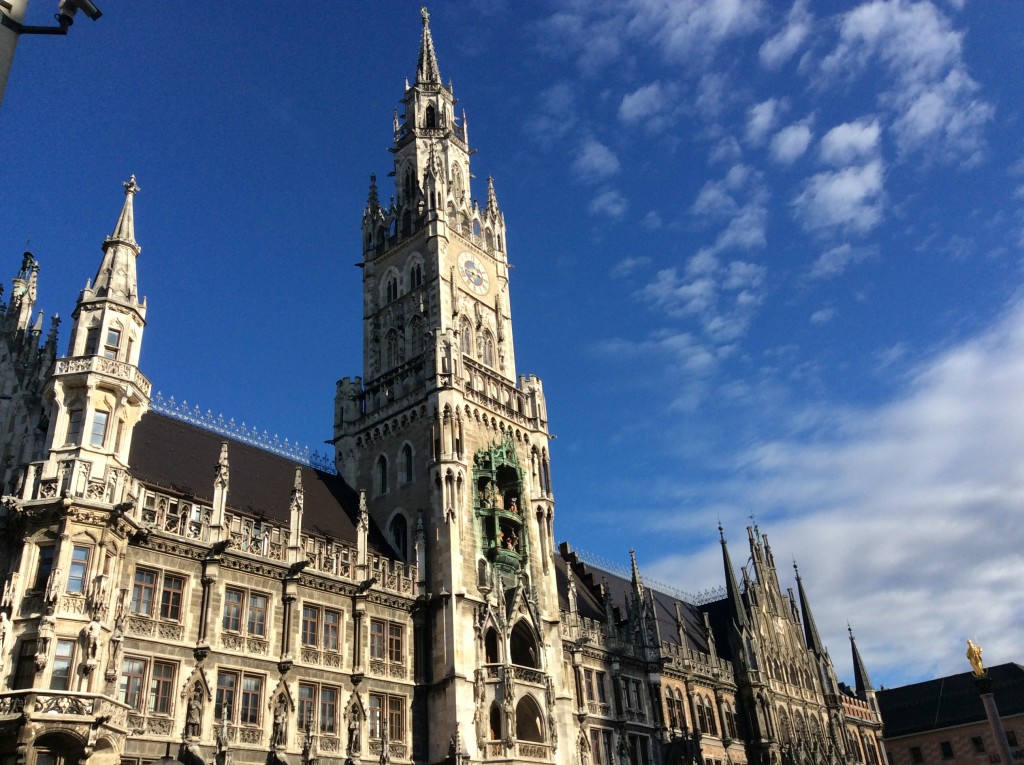 Somewhere outside of Munich, January 26th, 2016

Two days in Munich. I am tired. Back on the train. Munich was really fun. Paul Solecki from Kansas was my minder for the last few days. I use this term only half jokingly. Along the way, I feel very very fortunate to catch up with old friends who go out of their way to make my tour easier and more successful. I met Paul in the Bróg, a late night bar in Cork, many years ago. Ray Barron who recorded the bulk of my first two albums introduced us. Paul lived in Cork for years.
He also took me to my first and worst baseball game at Shea Stadium, NY, almost fully 10 years ago. It was a terrible game and I felt like I was at an unending Latin Mass.

He’s a very good indie- pop songwriter, very melodic in a similar style to Teenage Fan Club. In Munich, he is also working as a recording engineer, an open mic host and a bass player in a Bluegrass Band. Like, many a graduate from Cork’s Coláiste Stiofáin Naofa Music, Management and Sound course, Paul is a doer. Commenting yesterday that he uses what he learned there every single day. I have to say I feel the same about the course. It taught me many things, primarily that a career in music is possible. Additionally, that if you want music to be your job, you have to be prepared to work at it.

Paul is also a relentless punner. Relentless. Being around his punning was akin to taking a self awareness class.

Paul picks me up from the Hauptbanhof and before we do anything at all insists that I accompany him to his favourite of Munich’s many fine sights. A random Michael Jackson shrine. 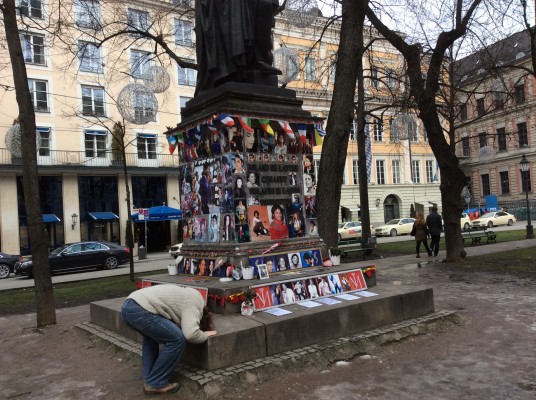 My gig on Sunday night is a private event/ not quite a house concert, just outside of Munich, in Dachau. At the railroad Saloon. Talk about the weight of history. The venue is one of the stranger I have entered. In the backyard of somewhat rural/ somewhat residential area, I walk in the door to find what appears like a Bar/ Museum of American Western films and country music. Later when I spot a knitted confederate flag on the ground, I am told, “Oh, yeah we didn’t know that was a bad thing, we took it down”. I believed them, that to them it was just something they associated with country music.

This is, it may shock you the first time I have played on stage with a near life sized John Wayne cut out. 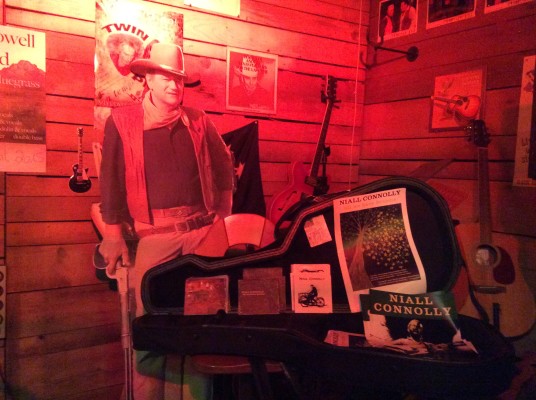 Again, I am wondering, who is going to come to this? The room fills up, there’s a Mike from England, a Brendan from outside Baltimore, a Sarah from Saarbrücken, an Avinash from Nepal, a Norbert, a Gemma, a Betina, a Florian, a Vesna and more. A grand old bunch onto see myself and John Wayne on a rainy Sunday in Dachau. The host Angela, speaks broken English with great enthusiasm and she is brilliant in the Irish and American sense of the word. I enjoyed the gig and played a couple of newer songs too.

So Lucky with Solecki

I spent Monday morning exploring Munich and drinking coffee with Paul and his 17 month old daughter Clara. The last time I met Paul, his partner, Ankica was pregnant, and I wondered, how’s fatherhood going to sit with this guy? Paul seems to relish it and is it impossible not to be charmed by how he is with Clara and her excitement for the the everyday extraordinary. Birds, trains and melting snowmen all get the vociferous recognition that us adults sometimes forget they deserve. 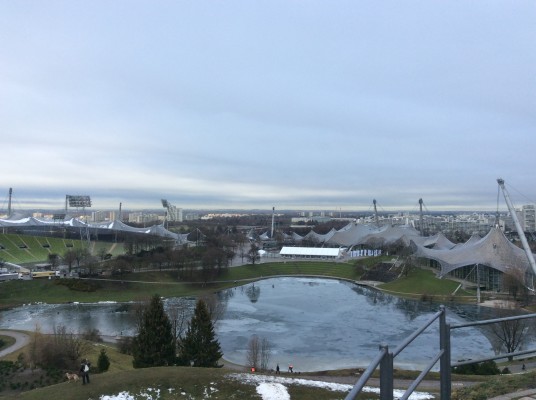 Paul takes me to the old Olympic Park ( more sad history there of course). The hill at the park is built from debris from World War II. From the top of this hill, I can see the site of the 1972 attacks. Turning around I see the snowcapped Alps for the first time on this trip. Later, we walk around Munich’s picturesque Altstadt area. I mention, I really should probably get a new shirt and Paul takes me to a Second Hand store with shirts that would only serve to worsen my appearance and an incredible amount of David Hasselhof and Chris De Burgh records. ( There you are again, Chris). He also buys me an Irvine Welsh book for 50 cents.( That’s how much it cost, the book is for me.) 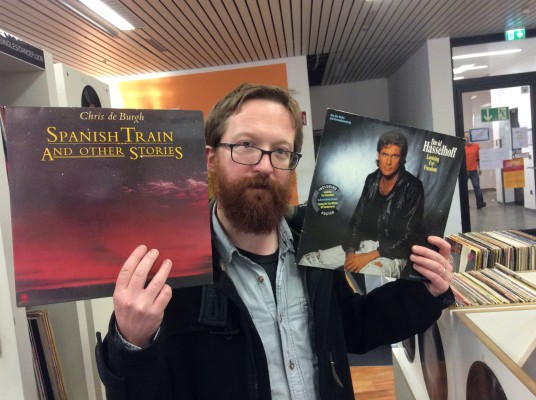 One for each hand at the Second Hand Store. 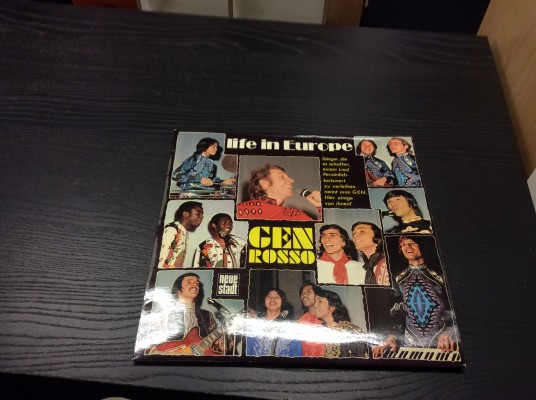 The gig tonight is at Eine Welt Haus, which is more like a community resource centre than a club. There are multiple events going on here. As well as dance, theatre and music, they offer language classes and legal advice to refugees and immigrants. Tonight, I am the featured performer at an open mic. After years of hosting an open mic in New York it is interesting to attend one as the performer and not the host. The standard for the most part was really good. I did about 40 minutes and invited a few people to join me on the last song, ‘The Boys Are in the Kitchen Sink’. Wolfgang on double bass, Gemma on flute, Betina on violin and Paul on bouzouki. It was fun and I sold a pile of cds.

Afterwards I was delighted to meet Paddy Saul’s sister Sharon and her husband Ralf. As many of you know, Paddy Saul is a great friend of mine who lives in Boston and has been a huge help to me up there in recent years.

Now I am on the train to Quackenbrück, where all going according to plan I will meet Mel and we will head out to Menslage for tonight’s house concert in a rural wine store.

I’m listening to the audiobook “Deep Down Dark”, about the Chilean miners. It’s remarkable. 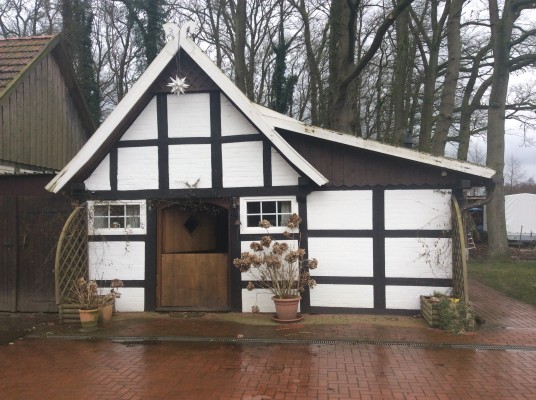 I am writing from my tiny little house on the property of Wojtuns wine shop in Menslage. I played here for the second time last night. Last time I was here I wrote the song ‘ When We Are Soil’, in this little house. I was really, really tired last night after a long journey from Munich. I was happy to manage another totally dry day in this space full of wine, whisky and beer. The gig went well. A sign of ageing perhaps, but I was very pleased to get to bed before 11pm and fall asleep listening to the wind and another chapter  from “Deep Down Dark”.