Monday September 25th, 2017 – In the van somewhere between Lemybrien en route to Kilkenny

What about ye? In the back of the van. Warren napping. Mac driving. No naps for Mac. Low sun on the mist of another sunny morning. We just met my father in Lemybrien to pick up a borrowed guitar and bass amp in preparation for the band’s arrival on Wednesday. (Thanks Flor and Paddy for the loan.)

Saturday we played a gig at the Strand Inn in Dunmore East. It is a spectacular location and we were treated very well. We had what Mac described as ‘The best fish and chips he’s ever had”. I’d say it was in the top three. Later we slept in the van in the car park next to some thatched cottages as an outraged ocean battered the storm wall.

Last night we played a house concert at Brian Mulcahy’s house in Waterford.
Warren did a great opening set and Anthony joined us for Skin and Bones at the end. Lovely gig. During the day I did my first live radio interview from the van with Alan on Red Fm. Then onto WLRFM in Waterford to do a pre record and interview with Zoe. I also sang ‘Open Your Eyes’ and ‘May 12th, 1916 – A Song for James Connolly’ in that session. While in the studio Rob O’Connor from Beat FM invited me to come into his studio for an interview and a song too. He played ‘Artificial Lake’ from the album and I performed ‘Sacre Coeur’ acoustic in the room. Lilian Smith played ‘Artificial Lake’ on RTE radio 1 yesterday morning too. My sister and her nieces came down to see us in Dunmore East yesterday afternoon. It was a picture postcard perfect sunny day that as Mac put it felt like many time zones sunnier than the night before. A really beautiful day. 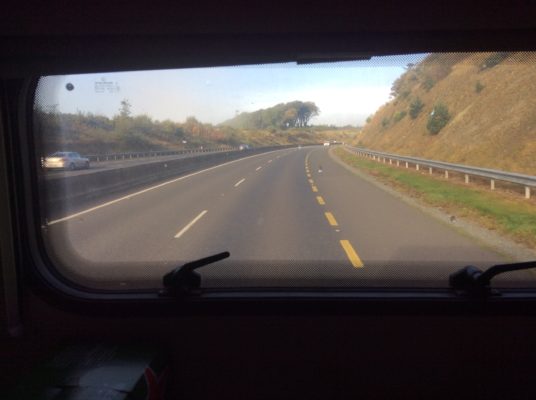 I did a radio session with KCLRM this morning in Kilkenny. I sang the connolly song and ‘open your eyes’. We spent a few hours rambling around town afterwards. I bought some Penny’s jocks and t-shirts. We heard a banjo busker singing Raglan Road. I spied a picture of John Blek in the window of a record store. We had some lunch in a random bar on one of Kilkenny’s picturesque medieval street. A biker tourist from Georgia actually asked, “Excuse me guys, can you tell me why the top part of the map is called Northern Ireland, its all ireland right?” I answered as briefly as I could.

I also overheard someone describing something as orangey. Orangey: adjective for when the word orange is either insufficient or too precise.

Malone has been doing some surreal commentary on our surrounds.

Wednesday, September 27th, 2017 – On the way from Wexford to Dublin Airport

We’re on our way to Dublin airport to pick up the rest of the band.

Afterwards a man at the bar told me a tragic story about his wife dying suddenly three years ago and a robin coming into his bedroom and sitting on her pillow a few days later. I told him Ian Whitty had just the song for him. Another woman who has lived there for 26 years tearfully told us that it she is without status and can’t leave the country for fear of not being left back in. Sad to hear that the Irish immigration system is also so full of stories of human suffering and cruelty.

We slept in the van and went for a very picturesque walk along the river Liffey. Warren and I recorded a version of ‘Sally Gardens’. I felt like Captain Ireland.

Yesterday we headed down to Wexford. Mac found a gorgeous campsite right on the water. Ah. Electricity. And showers. And Wifi. We had a good slow lunch at a hotel on the corner. Chowder and a salad. I went back to the van tried to take care of some promo stuff. It can be hard to stay on top of the email and management stuff while on tour. When it is most important.

We walked across the bridge at sunset into the old Viking town of Wexford. THe gig was at the Sky and the Ground. The place is named after a Pierce Turner song. I met him at a baggage carousel in JFK once. Or maybe it was Dublin. It was definitely at a baggage carousel. I really like the venue but it has previously been very quiet. Last night we had a very good turnout and a lovely gig. WAlking back along the bridge afterwards we passed two cars parked on the footpath next to unmanned fishing rods. Their drivers sitting in the car smoking joints and fishing on an autumn Tuesday Wexford. I was thoroughly impressed by the lack of discretion.