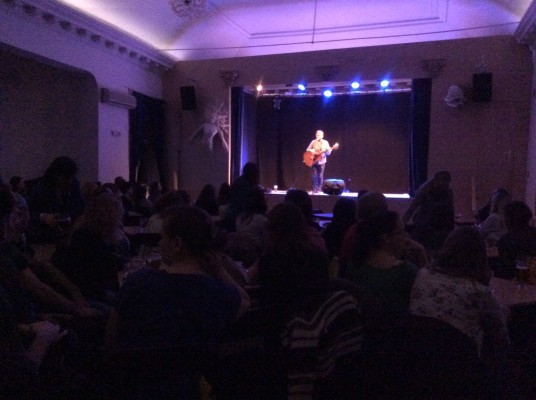 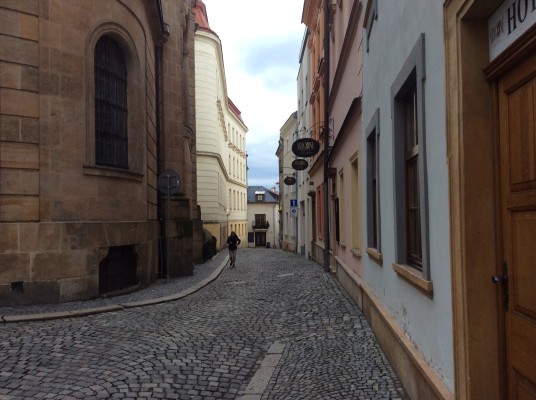 A two hours and twenty minute train ride from Prague, Olomouc is well worth the trip. An historic town and also a college town, it has the energy and edge that comes with that. I also has a tiny fraction of Prague’s tourists. On the recommendation of a friend, we booked into Hotel Penzion Na Haradé in the medieval part of town. This is the section of the town that survived the 30 year war. It is always worth asking locals for tips and I am glad we did. This hotel, in an historic building, is central, extremely comfortable and affordable. The girl at the reception’s broken English was more than compensated for by her enthusiasm and charm. 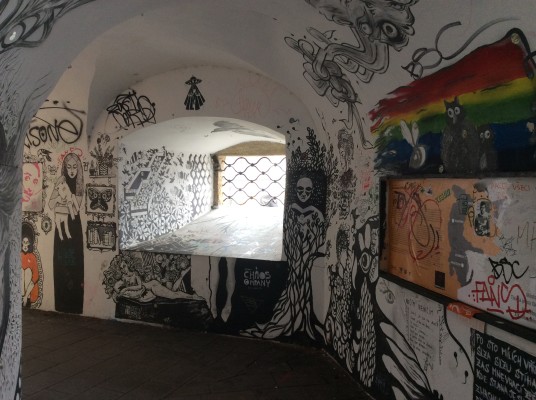 We met with my friend Matthew Sweney and David Livingstone and David’s wife Ladislava for dinner before the gig. They are really warm and friendly people. So, far from home, almost 6 weeks into the tour, I felt relaxed, welcome and completely at ease. We met at U Kohouta on Lafayetova street. Again, I am really glad we asked for advice. This place was incredible. Imagine, if you will, what a former Czech boxing champion who now runs a hugely respected restaurant might look like, and you have the facts and the face for the proprietor. He’s a real character. The kind of guy who doesn’t open his restaurant on weekends or during the summer. Because he doesn’t want to and he doesn’t need to. The food was nothing short of incredible and the local beer, far too drinkable. Matthew gifted us a jar of the restaurant’s famous hot sauce and a bottle of his own homemade apricot schnapps. I am glad I didn’t drink it last night.

A Full House in Faraway Town 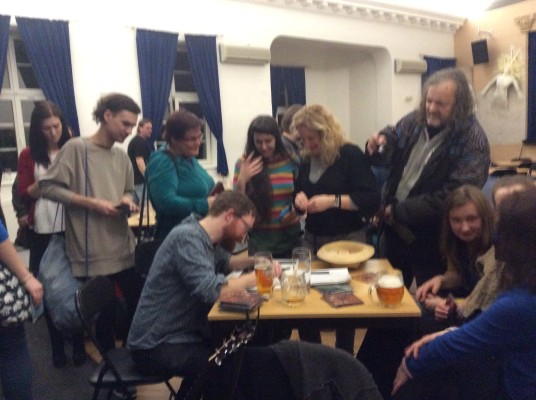 We got to the venue about 7pm and it was already pretty full. The theatre opened during German occupation and served as a space for productions in Czech language. A defiant in act of rebellion at the time. Jiri, the owner, is an actor and once lived in Ireland for two years. “I don’t like Cork”, he offers. Otherwise, he was an absolute gent and there was great energy in the room. Jiri became concerned that is was getting too full, so last minute moved the entire gig the much bigger adjoining room. I did my best to keep my concerns about the sound in check (avoiding the pun, too), and help move the chairs and set up the sound as quickly possible. The bigger room quickly fills up too, making this one of the biggest gigs of the tour. What a beautiful gig it was. I want to thank Matt, David, Jiri and everyone for coming out. I finished my set with “The Boys Are in the Kitchen Sink” with the entire crowd singing the chorus, “I’m holding out for love, coming up for air”. It was a magic moment to close a beautiful evening. 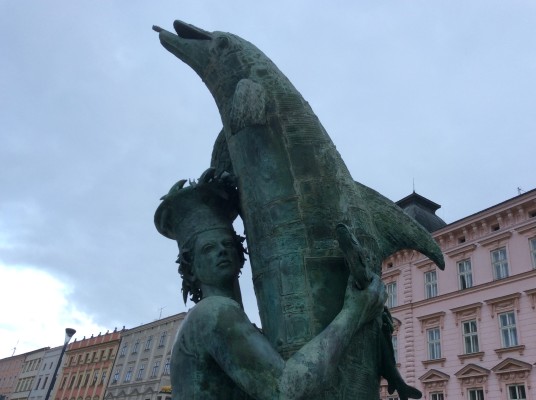 Right now we are bouncing along on a much delayed train to Vienna. We just had a conversation with a woman in a mixture of Czech, English, German, Hand signals and Mumbles. It was great.

Zen and the Art of Bribing a Train Conductor

Right now we are passing through Slovakia. The only country in which I have paid a bribe. Many years ago, travelling with David Rhynhart, we were surprised to learn that his Global Interrail pass didn’t cover Slovakia. I mean I have heard it is out of this world, but didn’t think they meant it literally. Oddly enough, my Global pass did. Beware of the differences between Interrail passes purchased in Europe and US. We had nothing approaching the ticket price in the right currency. The conductor threatened to kick David off at the next stop. David maintained his usual Zen like calm. I said, surely there is something we can do? I followed our conductor to his office compartment. Closing the door behind him, he asked me if I would need a receipt. Reading between the very readable lines, I said “No sir, I do not, I need my guitar player on the same train as me.” I paid him the 6 euro and three dollars that were in my wallet. He put it in his pocket and all parties were equally satisfied with the arrangement.

I have been to Vienna a number of times. Mostly thanks to Neil McCarthy, the wandering poet, the Voice and Verse founder, door opener extraordinaire and the most supportive friend anyone could hope to have. He’s recently become a father and I’m excited to meet his daughter Izzy Lee for the first time. Added to that, Emily Kolbert (formerly Joffee) who worked in the Path and performed at any Big City Folk events while she lived in NYC is now in Vienna. And Tim Nugenthead is travelling from Budapest for tomorrow’s gig. Tim was another Big City Folk regular. And, unbelievably, or maybe inevitably with the amount of touring I have been doing, Karl Nesbitt, yes, the very one, will be in Vienna at the same time as us. Tonight’s gig is organised by Shane O Fhearghail, a great songwriter from Dublin who does a lot of the same European gigs as me. Tomorrow is the Laden with Dominik. Definitely more stories to follow.