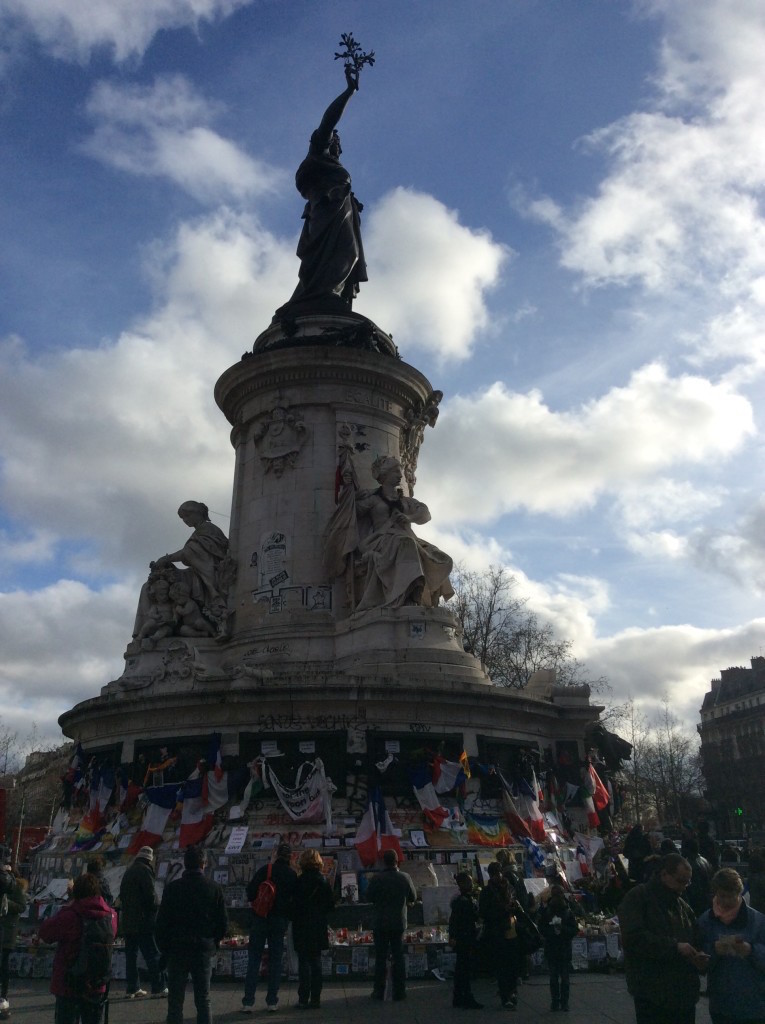 And so it goes, after months of planning, the tour has begun.

I am staying in a tiny but clean and well located airbnb apartment right next to Le cimetière du Père-Lachaise. It is comforting to know that Jim Morrison, Edith Piaf, Oscar Wilde, Chopin and many more are resting nearby. From my desk I am looking out onto a rainy Rue Ramus and the cemetery walls. The room is spartan and quiet. No tv. No radio. The walls are lined with Psychology books which are seemingly colour cooridnated. I wonder if reading Freud in French makes it easier to find a double entendre?

After a thankfully uneventful flight ($260 one way from JFK, thank you XL airlines and Kayak) I arrived into Charles De Gaulle airport, disheveled but in good spirits. From there I took the RER to Gare Du Nord. I encountered the first refugee of this trip on the train, a boy of perhaps 17 handing out cards asking for coins to help him and his 4 brothers, whom the card claimed, are recent refugees, and as such are not allowed to work. I believed him. I then walked from from Gare du Nord, getting lost at first, down Boulevard de Magenta, merging with Avenue de la République, at Place De La République, I paused for a few moments to see the tributes to those lost in the attacks in Paris last January and November. The walk was just under 5km and with my luggage in tow. That was enough to help knock me out for a few hours sleep before the gig.

People often ask how I make money on tour. A lot of it comes down to being thrifty. Like New York, Paris is notoriously expensive, and like New York, I am sure there are ways to be cheap. My 4 nights at the airbnb cost less than 1 night in a chain hotel. Equally, I was pleased to find a supermarché nearby. Here I bought a hot chicken and potato dinner, a banana, an orange, a grapefruit, a cucumber, two tomatoes,  a packet of smoked mackerel, shampoo and a six pack of beer for 17 euro. This helps somewhat to justify the two $12 beers I felt entitled to at JFK! Inevitably stuff goes wrong on tour and there will be hidden costs along the way, making it all the more important to summon my Cavan blood and be frugal, especially at the start.

Last night’s gig was quiet but enjoyable. It was at the Hideout, close to the Gare du Nord station. The booker Robin and all the staff were very friendly. They all said it has been really quiet there since  November 13th.

It was great to have my friend Moha Ngom, a brilliant Senegalese – French singer, who I know from New York there too.  ( Catch him and his band at Rockwood Music Hall, NYC on January 20th.) Moha helped me find two of the Paris gigs. My friend Jean-Marie who used to book me a lot in Brittany years ago was there with his wife Pauline. This was a real surprise as I didn’t know they were living in Paris now. Pauline’s mother was looking after their two small children for the night. As always, I felt great appreciation for the efforts people go to to come out to a gig.  Later my friends Wassan and Servaine showed up. I know them from playing in Rennes around the time of ‘The Future Tense’ Tour. Wassan now lives very close to the cafes where the attacks took place on November 13th. She was in fact due to meet a friend there at that time but was offered a last minute ticket to go see the France vs Germany football match at Stade de France which was also targeted by suicide bombers. She narrowly missed two of these attacks.  There  are lots of stories like this in Paris and sadly, as the tributes at Place de la République remind us, many less fortunate stories too. It was great to catch up with them all.

After the gig I fell asleep watching ‘Making a Murderer’ on Netflix, maybe not the best bedtime viewing. 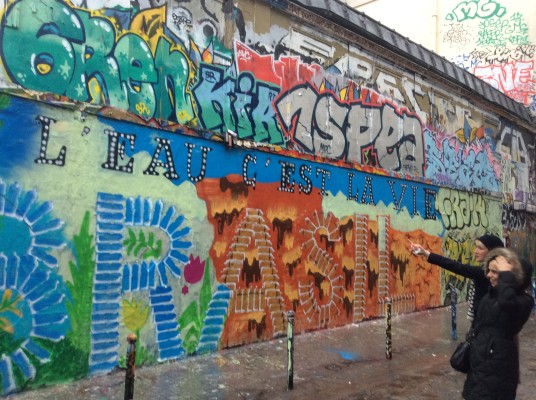 I slept late as I could and wandered around the cemetery for a while this morning. I met Wassan for much needed coffee. She gave me a great tour of the Belleville area of Paris, with its North African, Jewish, Chinese, and Hipster/ BoBo, Bourgeois-bohème stores sitting side by side. Edith Piaf was born here, some say in a stairwell, some say on the street itself. I passed so many enticing smells from cafes and  small restaurants, that I might need to walk another 10km today and go back and sample some more. We also went to the Hill of  Belleville, also known as Montmartre Populaire as it offers similarly magnificent and less crowded views to its more famous and affluent neighbour. This area has both an extremely rich history and vibrancy. In some places I have been the sense of history can be overshadowed by tourism. Belleville felt both historic and vital. A mural of women of the resistance on the shutters of bookstore being a great example of the old and new sitting side by side. 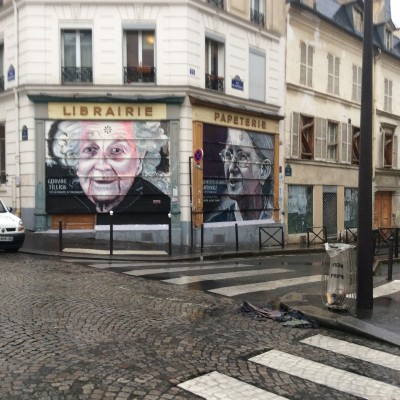 Okay, I am sure there are typos here but I need to go out into the night and find more stories,

Thanks for reading, thanks for listening,

I am playing an extra gig tomorrow Monday at Connolly’s Corner, and then Tuesday at Le Connétable, both start at 8pm.