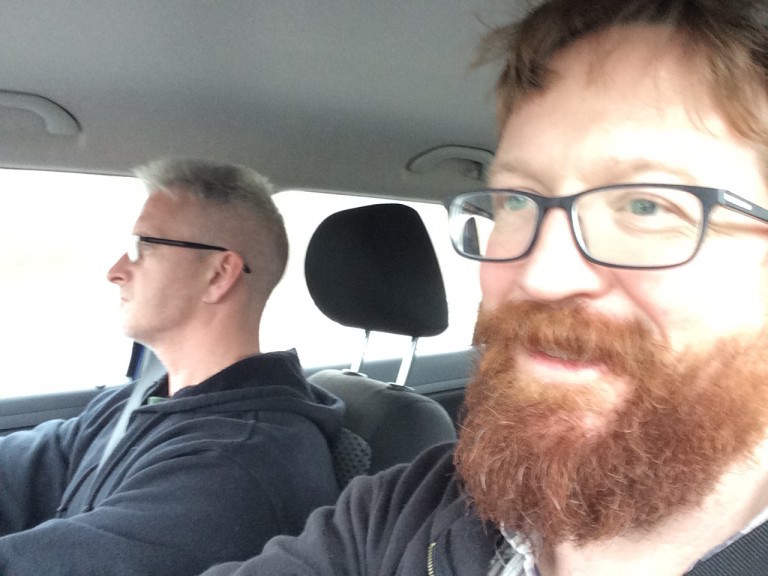 My grandmother Philomena had ten children. She was a kind and gentle and beautiful woman. Today is her anniversary.

It is also St. Patrick’s Day. To the green-face painted, green-beer drinking parades around the world, did you know St. Patrick wasn’t Irish? He was Welsh or Scottish, depending on your source. He was kidnapped and brought to Ireland by my namesake, Niall of the Nine Hostages. Yes, named after a hostage taker? Captivating audiences ever since. Etc.

Friends may joke about my spending St. Patrick’s Day in England. I’d be quick to remind them I am in the North of England. A very different thing. Up here Margaret Thatcher was about as popular as she was in Ireland. The sun is shining. It’s a gorgeous day. I had an incredibly good fish and chips and an awful cup of coffee in the quaint hamlet of Piercebridge. Straight roads are old Roman roads and the bridge in Piercebridge, I am told, still contains stone from the original Roman bridge. About twenty minutes outside of Bishop we had lunch at the George, daffodils growing out back by the River Tees. Very picturesque. Daffodils always make me feel like winter is over, everything’s going to be okay, for a while. 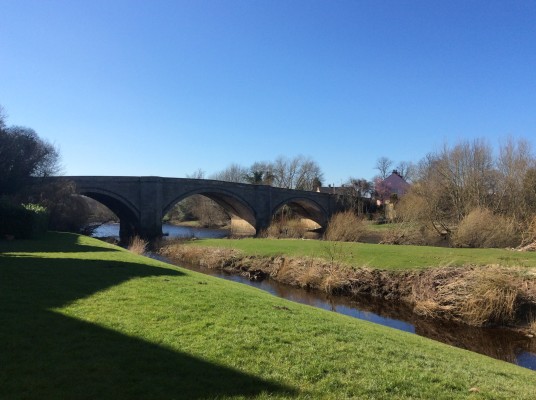 On the way back we stopped into The Green Tree where I will be playing later on tonight. A very friendly fella called Peter told me he had family from Kanturk, North Cork and said he’d be back later on. When we were leaving, Mac told me Peter had played football professionally for Middlesbrough and later for the Dallas Tornadoes. Whilst playing for the Tornadoes he played against Pele. I am now one degree of separation closer to the greatest footballer of all time. That’s a clumsy sentence but I know what I mean! I just did some research and I found him right away, it would appear he even scored a goal against Pele’s side.
March 18th, 2016, On the A1 with Mac (Guess who is driving?)

The gig last night was great fun. I love Bishop Auckland. And I love that music has lead me here time and time again. Before the gig I did a radio interview in the kitchen. There was a great, great turn out and it was one of the most respectful St. Patrick’s Day crowds I have ever played to. It has been a number of years since I played here so a lot of the requests were for older songs of mine. I played ‘Long Weekend’, ‘The Sun is on Your Back’ and a lot of songs from ‘The Future Tense’, stuff I wouldn’t often do in NYC. I also played some new ones. I feel like ‘Central Station’, and “Come On In” are really taking shape. The owners, Johnny and Lisa, were delighted and have told me I can come back anytime I want. Despite turning down at least 10 offers of pints at the end of the night I still felt a bit ropey this morning. Not bad for March 18th though. I sold a good few CDs.
My friends Ian and Joanne drove from Sunderland with their friends Lee and Julie. I met them at the Red Lion, NYC too! They have been coming to NY for years and this was unbelievably my first time meeting them in England.

A dapper horse trainer who described himself as “ the last proper gypsy in Bishop”, told me I was too scruffy. Last night being a laundry day, I wouldn’t disagree with him.

I had a great chat with the lads after. I was particularly intrigued to talk to Peter MacCormack and hear of their own Sunday Social, where people bring their own records to a local bar on Sundays and play music for each other. I love this idea, and I think it might also make a really fun alternative Big City Folk night every now and again?

Three swans with their heads in the grass in a field at the side of the motorway.

On way down from Bishop to London, we stopped into Busy Bees diner in Yorkshire. I did some good eavesdropping here as a myriad of British accents loaded up on today’s special of gammon, beans, egg and chips. Liverpudlians and Tyke accents are truly brilliant. In the interest of sociological and gastronomical studies, I joined them. Delicious and salty. I imagine a diet of this alone would kill me within the week. Tops. Again the coffee was appalling. Mac described it as tasting of “puddle”. It did sort of remind me of that childhood feeling of falling full force on my face in the rain during a hurling or football match. Not in a good way. The decor would best be described as “what was in the shed at the time”. Two bmx bikes on the wall, a bunch of mediocre paintings of runners/ trainers/ sneakers (interesting etymological differences for Ireland, England and US there), and inexplicably, in a restaurant in March, a skeleton. In short, well worth the stop.

Now we are in the car 81 miles from London listening to random mix CD that Gary/ Gaz made..

In my head calculating rent. Calculating what to say to Vinny about the new lease. Revolt against the raise. Resist it. Suck it up? I hate feeling powerless. Preoccupied. Preoccupied, it’s a good word.

The Undertones:
“My Perfect Cousin! What I like to do he doesn’t!”
“He thinks that I’m a cabbage cos I hate University Challenge”

“Just don’t let me fuck up will you,
Cos when I need a friend it’s still you.”

J Mascis, what a song. That inspired the Freaskscene nightclub in Sir Henry’s in Cork. So many brilliant nights. John O’ Leary. I think it’s still going elsewhere? Emmett, Chloe and Declan all DJ’d there at some point.

Something meandering, a repetitive four note bass hook and programmed drums. It’s all about the pauses.

Kaiser Chiefs – Yours truly, the Angry Mob
“You could do anythiiiiiiiing”
“We are the angry mob, we read the papers every day”

A toddler taking a pee on the side of the road. Mac tells a story of a friend whose party trick is to “piss like a little boy.” What? “After a football match or whatever he will stand at the urinal with his underpants and pants fully down around his ankles to get a reaction.”

Brilliant. The Courage of Clowns.

The Wedding Present are doing some of the tour with the Wonder Stuff right now. I loved them as a teenager. I got a free ticket to see them in the Forum on my first day working at Comet records in Cork. And I have the singer’s autograph on the wall of the room in my parents house.
I opened for them in the Half Moon, well, cinerama, which was the singer’s other project circa early 2000s.

I can’t believe how low the vocal is in the mix.

Something I don’t know.

Still great.
Saturday March 19th, The A1 heading back up North

London gig was good. Well organised, well attended. My friend John Tully / Doctor Mirabilis did a few songs to kick things off, followed by Oktoba and ‘Songs For Walter’. Tim and Katherine Tully were there too. JP O’ Malley and Ger Harrington. Too much to drink afterwards. I left a bag with a few t shirts and my mailinglist somewhere. Uh. My first significant fuck up of the two recent tours.
If you signed the list in Gourock, Glasgow, Edinburgh or London, please do again online.
Uh.

I am in Manchester thinking about Man Utd and the Smiths.