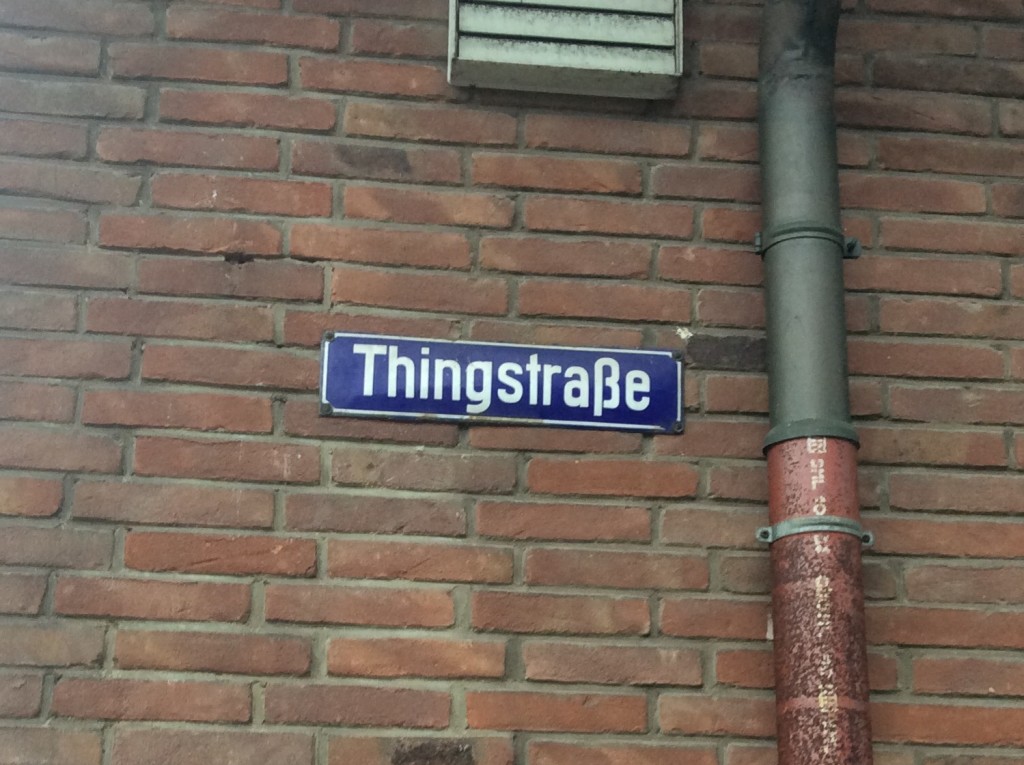 What a great weekend.

I played a Church built in 1683. A breakfast concert in French Cafe in Germany. A 43rd Birthday Party for a Kazakhstani chimney sweep. Another house concert for another Chimney sweep. Schornsteinfeger is the German for chimney sweep. Like, you didn’t already know that.

It has been such a fast week. I just said goodbye to Mel and Ulf. They have been champions of my music. They made the gigs they organised so easy and fun. We joked about them reintroducing me to the wild today. 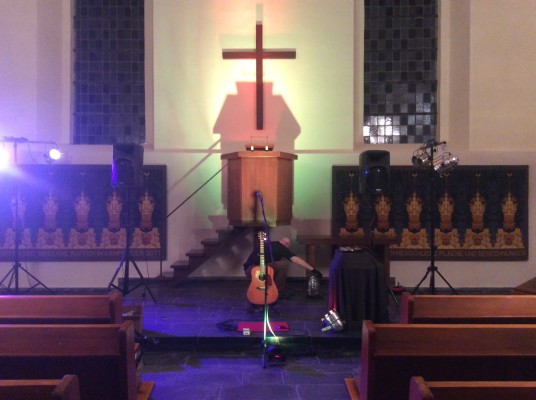 Friday night I played a 17th century Protestant church in Moyland. Right next to the 12th century castle. These are the kind of gigs that John Collins alone can find for me. I might see a place and think, that’d be great for a gig. John sees it, and makes it happen. We haul in the lights and set up the sound system and in under an hour and we are all set. Turning off the reverb will not be an option at this gig. We grab a quick bite to eat at a local Turkish spot. When we come back the church is pretty full and there is a great atmosphere in the room. I really enjoyed this gig and tonight the cd sales reflect the gig. I am grateful to John for finding this gig and promoting it so well. I joke that we all have to be in bed by 3am as I have a 10am gig the next morning. Later back at Rheinterassen Collins on the banks of the Rhine, we have an Absacher, a night cap and watch the boats go by. I learn that the German  word for fresh water translates literally as sweet water. Expect to find that in a future song. If music doesn’t work out, I say, not for the first time, that I will become a pirate on the Rhine. So much wealth on this river. So few pirates.

Saturday, January 30th, A French Cafe in a German Town

Again, this gig, a breakfast gig, comes courtesy of John Collins. It is my third time playing this small French Cafe in Hamminkeln. The owner tells me that they were fully booked for the concert 24 hours after announcing it. That sounds very impressive doesn’t it? I shouldn’t tell you that fully booked means 30 people. The gig felt great, I had plenty of requests and sold a ball of cds. It felt great to have made a success of the day before breakfast. 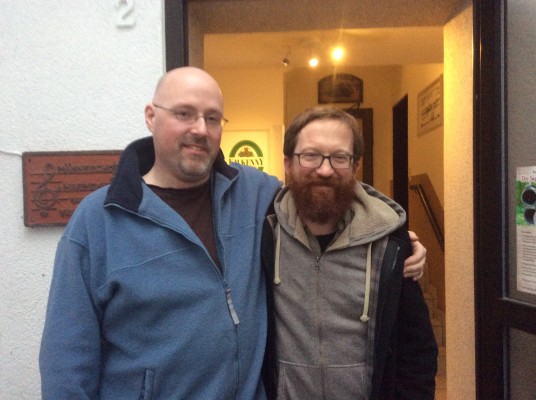 Later we head back to Rheinterassen Collins for one more cup of coffee before I go. I hate saying goodbye to John, but I know I will see him somewhere, likely somewhere surprising, further down the road.

We/Or/Me – Everything Behind Us is a Dream

Mel and Ulf drive us to Detmold. On the way we listen to the brand new We/Or/Me record. We/Or/Me is a the musical project of my friend Bahhaj. I met Bahhaj through Jamie from FRED in Cork, a hundred years ago. He lives in Chicago now and we’ve shared the stage together a couple of times over the years. His gentle songs are full of love, life,( including the death part) and mindfulness. I’ve always been a fan, but this new album is a triumph. It hits me to the core. I love it. I can physically feel it. It is simply and sparsely arranged and it is great company.

I have more chimney sweep friends than any other Brooklyn songwriter. Fact. Tonight, my house concert at Andre’s house has been moved to a nearby restaurant. In Kazakhstan it is considered bad luck to celebrate your 40th birthday. I am not sure if this is true but it is what Andre tells me and I love it. Either way, he is throwing nothing short of a feast for his friends to celebrate his 43rd birthday. I am the musical guest. I feel like I am basically the worst idea possible for this event. Surely, you want something a little more vibrant and upbeat. But Andre is a fan, it’s his 43rd birthday, and this is what he wants. Who am I to deny a chimney sweep on his birthday.

I am also invited to dine with them. The food is magnificent and plentiful. There’s a bottle of vodka at each table. I can do plenty of damage with 4.5% alcohol so I stick with the beer. When I turn 43, Andre, you are definitely invited to the party. The gig itself is so-so but all night long I can’t help but laugh at the weird and wonderful situations that music has brought me to.

Kaiser Wilhelm’s Lost his Yo- Yo 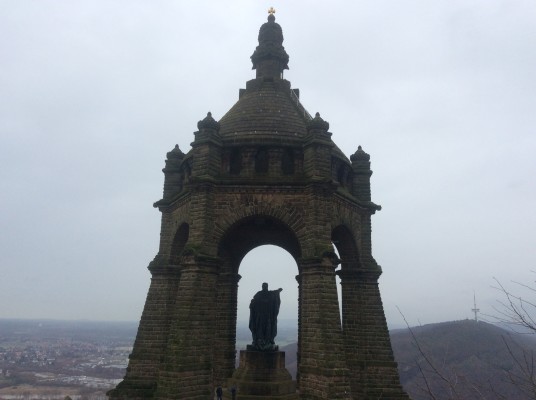 Kaiser Wilhelm’s Lost his Yo – Yo

Saturday and Sunday I stay at Mel’s sister Bea and her husband Guido’s place.

When I announce that I am going for a walk Sunday morning, Guido offers to drive me to the local sights. We go to a hill whose German name translates as Like A Mountain. After a day of sitting and feasting I badly need the exercise. There’s a gentle drizzle and the brisk walk up a hill like a mountain is exactly what I wanted. Overlooking the river Weze is a statue of Kaiser Wilhelm with his arm outstretched in a disturbingly familiar fashion. Guido says on April 20th, Hitler’s birthday, “The stupid nazis sometimes come here”. I say Kaiser Wilhelm looks like he needs a yo- yo. Guido laughs and says that someone has already done this some years ago, a with a wheelbarrow wheel and rope. Who says the German’s lack a sense of humour?

It is muddy and we walk past some mine entrances, Nordic walkers, ( the ones with the things that look like ski sticks, who Paul Solecki’s mother in law mistook for the blind, noting in Munich “There sure are a lot of blind people here”). There’s a 10th century church, a launch pad for hang gliders, a stone tower complete with spiral staircase. Another walk through history.

We head back to the house and Ulf has already set up the PA and the room for tonight’s house concert. It will be in the Winter Garten, basically, like a conservatory. The room looks amazing. When I get there Ulf is playing a recording of the gig from the church through the PA. It sounds great, the crazy reverb almost sounding like someone is singing with me. When I arrive in the room, a new song of mine “I have a name”, is playing through the sysyem. It might be time to start thinking about recording again.

The gig is at Bea and Guido’s house. Guido has is also a chimney sweep and he is presenting the gig with the help of another friend Michael, also, also a a chimney sweep. The gig, my last with Mel and Ulf is a blast. At the break we watch the end of the European Handball final, in which Germany comfortably defeat Spain. Later one of the guests telsl me that Michael gave him a flier for the gig when he was at his house cleaning his chimney. G’wan the chimney sweeps.

If the music, or the Rhine river piracy doesn’t work, I now also have an open offer of an apprenticeship as a German chimney sweep. 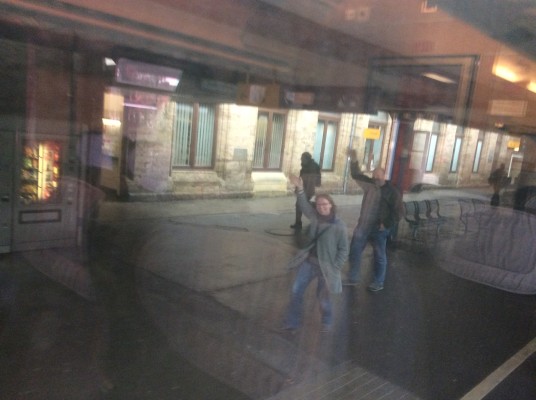 Singer released back into the wild.