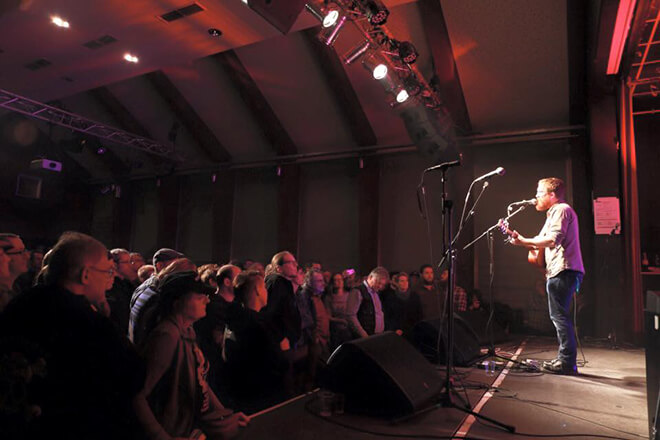 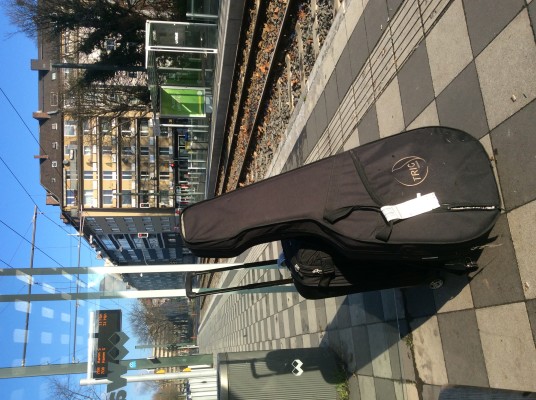 Waiting for 708 tram to Düsseldorf Hauptbahnhof.

The sun is shining on last night’s snow.  I played the Düsseldorf Acoustic Festival. What a great night it turned out to be. More of that later. First, I want to capture a few impressions from the last few days before they slip away.

I arrived into Cologne and was met by my friends Mel and Ulf. They have helped organise a lot of the gigs for me. They are serious music lovers and I am lucky and grateful to have them on my side.

Cologne has been in the news a lot lately following a series of sexual assaults and robberies on New Year’s Eve. Many perpetrated by immigrants. Not all of the attacks were by immigrants and those that were were not necessarily recent immigrants. These undeniable horrible incidents have added fuel to the fire for many right wing Germans. That’s what we’ve been hearing on the news. As yet I haven’t seen  that side of Germany.  A few days later I have a good talk with Mel and Ulf about the refugees. Ulf being of the belief that if Lebanon can take in so many Germany can take a million. Adding that of the millon refugees who have entered, many have gone onward. What a cloud of shame hangs over US in this regard. Trump’s extremism, perhaps, making some of us feel that disagreeing with him is enough. I struggle to remind myself of a seemingly obvious fact, that not being a “good” person entails more than just not being a “bad” person. With this in mind I am also heartened by those who have taken to the streets in January to say “Refugees Welcome Here”. The simplicity of the gesture, that willingness to stand in the cold to make someone’s welcome warmer, strikes me as beautiful and inspirational. That notion that, I can’t save your life, I can’t rebuild your country, yet I also cannot do nothing. I admire those who do whatever little they can.

These are some of the thoughts knocking about my privileged head as I make my way around Europe singing songs, worrying about attendance, sales, and paying the rent.

The gig which I knew might be quiet, was indeed very quiet. Still largely thanks to a woman named Stefanie buying a pile of CDs I sold more CDs than there were people at the gig. Imagine  that  New  York. Another of the guests was Lena, a huge Irish music fan who always brings some little gifts for the acts. She is a big Joe O’ Leary and Wallis Bird fan. So am I. So, Thursday’s gig was ultimately disappointing but fine. There will always be a few that don’t quite work out. 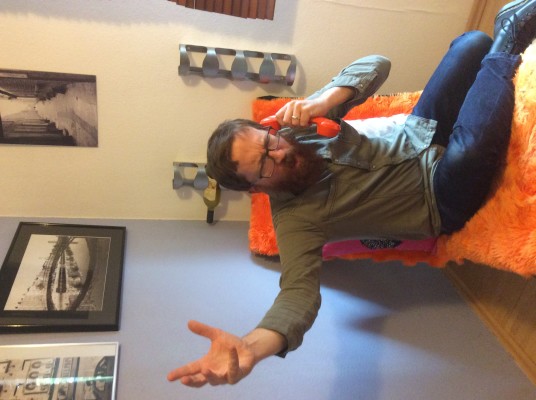 This photograph was brought to you in association with Caffeine and The Colour Orange.

Friday morning I surfaced slowly, rejuvenated after a great sleep and barely drinking the night before. After a good German breakfast of great bread a variety of cheeses and meats,  washed down with a couple of cups of coffee, we hit the road. Ulf had taken the day off and he and Mel drove me to Saarbrücken for a concert at their friend Nina’s house. As our altitude increased, the first snow of my tour came down. I knew this would inevitably lead to cancellations for the gig. There are so many variables on any tour. Nina’s house was wonderfully bizarre. Formerly a doctor’s office it had lots of weird and wonderful art. And a cat named Fergal who behaved like a dog named Fergal. Nina cooked us up a feast and I chilled out for a bit before the gig. Dealing with a few emails, finally confirming a venue for my gig in Olomouc and thinking about accepting a house concert offer from a complete stranger in Bremen. (In the end i accepted, stay tuned to see how that pans out!). The snow only costs me a handful of guests and the gig went pretty well. It took me a while to settle into it myself for whatever reason. This happens sometimes. German audiences can be tricky to read. On many occasion I have felt, they’re not really into this, only to be called back for multipe encores. ( “Zugabe!” )

After the gig I had an email from Brian at the LIC Bar to say he thinks it is time to bring the Sunday Social to a close. The Sunday Social was a mostly songwriter night I ran at LIC Bar on Sunday afternoons from October till May for a few years. I haven’t been able to do it much the last year with my touring schedule and have had friends cover it for me. Simultaneously dealing with bookings and mix ups on both sides of the Atlantic whilst on tour is a largely joyless task. I was not terribly surprised by this development. 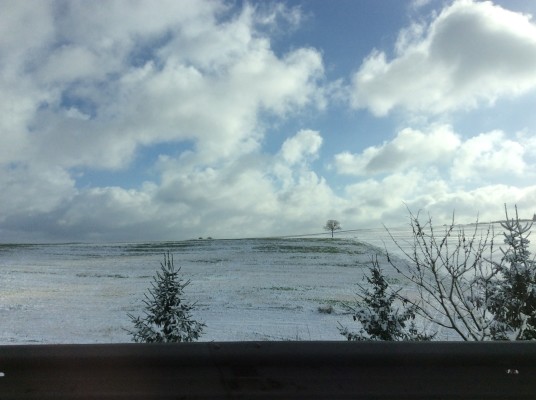 Somewhere outside of Saarbrücken..

Over breakfast, Nina, who when she is not hosting itinerant Irish musicians, is a psychologist, kindly encouraged my hope that all of these things are happening to make space for something better. We said our goodbyes and thank yous, I double and triple checked I wasn’t forgetting my head or my guitar and we left Saarbrücken. Well, somewhere outside of Saarbrücken. Truthfully, I have no idea excatly where we were. Ulf and Mel drove me to Düsseldorf for the festival. For reasons known only to such systems their GPS brought us the scenic route. It was gorgeous. Normally in their car I can expect to hear a lot of great music. About 50% Warren Malone, the rest equally divided between Josh Ritter, Casey Black, Bell X1 and Paul Simon. Today I also heard the Lost Brothers album which I liked. Things took a turn for the strange when I pointed out a Chris De Burgh poster as we passed through Trier. We shuffled through Chris De Burgh, with songs about a girl in blue jeans, a woman in red dress, and woman taking off her clothes, that fella’s got more clothing references than a H&M catalogue. We also listened to Herbert Groenemeyer singing in German. I didn’t understand much, but I’d say he’d be great craic at an after party. I wonder when that will happen? On the smaller roads the snow covered trees seemed to reach for each other and form a canopy. It made me feel like we were in a snow globe. I prayed to Chris de Burgh and Herbert Groenemeyer that whoever was holding it wouldn’t shake us too hard.

My favourite joke of the day came when we passed some snow covered crops in a farm and I subjected my gracious hosts to the quiptastic question, as to whether that was where frozen vegetables come from.

(Flashback: Maybe 10 years ago, my friend Billy Marnane tried to throw me out of a moving car for a bad pun. I deserved it.)

Ulf and Mel very kindly dropped me off at my hotel in Düsseldorf. I checked in, dealt with some more emails and headed to the venue for the festival. I was early for line check. I wondered if German efficiency or sound checks (almost universally running late) would win out. Noticing that there was an 8 piece band on the bill I realised there could only be one winner. There’d  be no time for a sound check before my set. I met Joel Havea  and David Berkeley for the first time, I  have  been hearing a lot about both of them for years and they were both every bit as nice and talented as I had been told. I drank too much coffee and ate some oranges, peanuts and vegeatable soup. That’s how you rock and roll, folks. 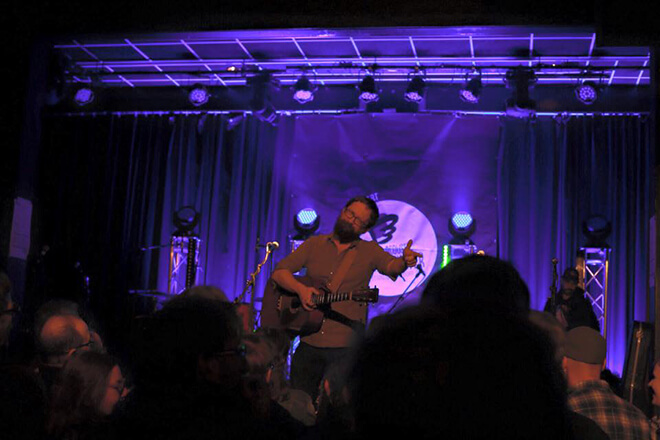 When the power went out – photo by Shel Ly

I was third on the bill. Safetyville and Joel played first and they were both flawless. After a brief introduction from Emily of NRW TV I took the stage. I made a few introductory comments and got a few chuckles. I had their attention. I was feeling present and focussed. I  opened with ‘A New Road’. It’s often a good one to win a room with, starting with just the vocal its sparsity tends to draw people in. Towards the end of the song my guitar cut out. I assumed I had stepped on my pedal. Not this time. My microphone was gone too. And most of the lights. I stepped away from the mic and finished the song acoustic. The audience approved. One of the front of house sound guys told me, “It is not us, it is the town.” My immediate thought was,”Fuck, I broke the town”.  Aside from some of the lights,  the power was gone from the stage. He suggested we take a break. I had the audience. I was thinking of Warren’s mantra, “crisis equals opportunity”, and thinking I can do this. I came out to the very front of the stage. Everyone moved closer. This was after all, Düsseldorf Acoustic festival. I told a story in bad German and English. They were all with me. Then we sang ‘Come back to the Table” together, totally unplugged, just me, my battered Martin guitar and several hundred strangers. The power came back. I finished my set. I felt great about it. The front of house sound guy thanked me for keeping it going. Tommy, the festival organiser told me I was his hero. The headline act (Justin Sullivan of New Model Army) gave me a shout out during his set.

I drank a few too many little beers, and eventually wasting some of the electricity I had earlier saved, I fell asleep in the lamp light in Zimmer 14 at Hotel Haus am Zoo.