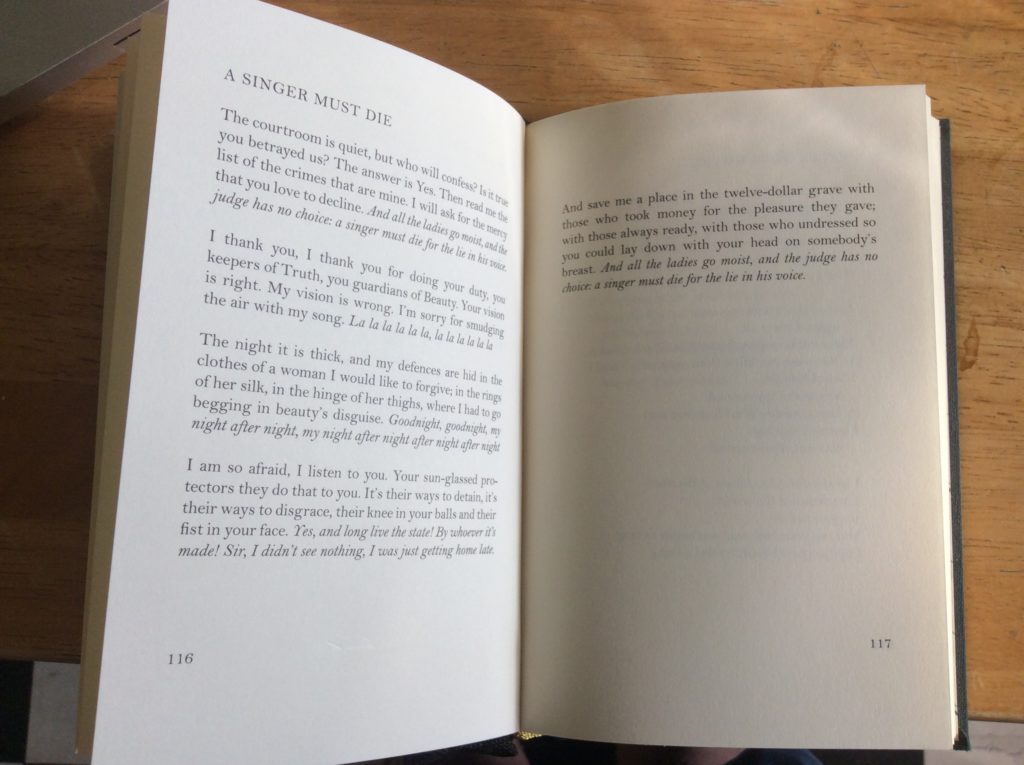 “Everybody got this broken feeling like their father or their dog just died.”
Leonard Cohen, ‘Everybody Knows’

A week is a long time in politics. How different a country do I live in this weekend than last? Maybe it is exactly the same and the cloak has been removed? Such strange and worrying times. If I as a straight white male am alarmed, and I am, how is it for my minority friends? My female friends? One Muslim friend told me that he is afraid for his sister and his mother is worried for them all. On the subway on Wednesday people looked dazed. Never before in my life have I felt such a sense of disappointment. Clinton was certainly an imperfect candidate. For me Trump’s rhetoric is unforgivable. I believe in the power of words. I believe that words have consequences. Freedom of speech comes with responsibility. Some truly awful things were said. I worry that he has made hate speech acceptable. I worry about the environmental impact of this vote. I see children on my street and I see their fragility and I am ashamed. I am a grown man. I have experienced grief, personal grief before with this election campaign and its result I feel a tremendous grief for the Animae Mundi, the spirit of the universe.

Now he will be president, and I would love nothing more than to be completely wrong. I’ll be keeping my eyes open. I hope I am wrong.

Then on Thursday night, the Anima Mundi, as if in an act of solidarity, displaying her own grief took Leonard Cohen. I never met Leonard Cohen. His music has been in my life for over a quarter of a century. I shared many a dark and happy hour in the company of his work. I first heard the muffled sounds of his music emanating from my sister’s bedroom. My initial feeling of “What the hell misery is she listening to?” was replaced by curiosity and soonafter with willing enlistment in his army of fans. Leonard Cohen’s music rewards repeat listening more than anything I have encountered. In this new age of a monosyllabic, tweeting president, I feel grateful to have been bathed in the warmth of Cohen’s articulate, precise and patient poetry.

Oh how I needed him this week. Thursday night. I was at the Way Station in Brooklyn. My friend Marc Delgado had just finished a very moving and prescient set. My friends Wavestate were playing a later set. I had gone out because I wanted to hear music and I wanted to be be with friends. I glanced at my phone. 1 Message. Warren Malone. “Leonard Cohen is dead, I thought of you.”

It had already been a bad week for sleep. On Thursday I didn’t go to bed till after sunrise.I stayed up all night listening to Leonard Cohen and exchanging messages with family and friends.

I was lucky enough to see him perform on three occasions, in Kilmainham in Dublin in 2008, at Glastonbury (where I played a much smaller stage the same year) and down the road from us in Brooklyn. His concert in Dublin, his first in decades, was one most mesmerising mass gatherings I have been at. I read somewhere that Cohen was so overwhelmed by the warmth of the welcome when he came on stage that night that he was moved to tears. Turning his back on the crowd for a moment to wipe away the tears, he said he noticed that entire band were crying.

Like Bowie before him, Cohen left us with a new album right before his passing.‘You Want it Darker’, came out a couple of weeks ago, just in time for my train ride to Chicago. No better companion. I spent 40 hours on the train that weekend and I must have listened to it at least 10 times.

I’m typing on a sunny cold autumn day in our apartment. ‘You Want it Darker’ is playing in the background. My life is richer for this man’s work. There is an old poster on my wall of a Leonard Cohen tribute night I organised at Mr. Dennehy’s in Manhattan on November 5th 2008. (Amongst the performers that night was Lana del Rey. Though that wasn’t her name yet.) If November 5th 2008 is ringing a bell, that may because that was the night one Barack Obama was elected president.

Thank you Leonard Cohen. May you rest in peace.

“Ring the bells that still can ring
Forget your perfect offering
There is a crack, a crack in everything
That’s how the light gets in.”
Leonard Cohen, ‘Anthem’
Buy ‘You Want it Darker’ here.