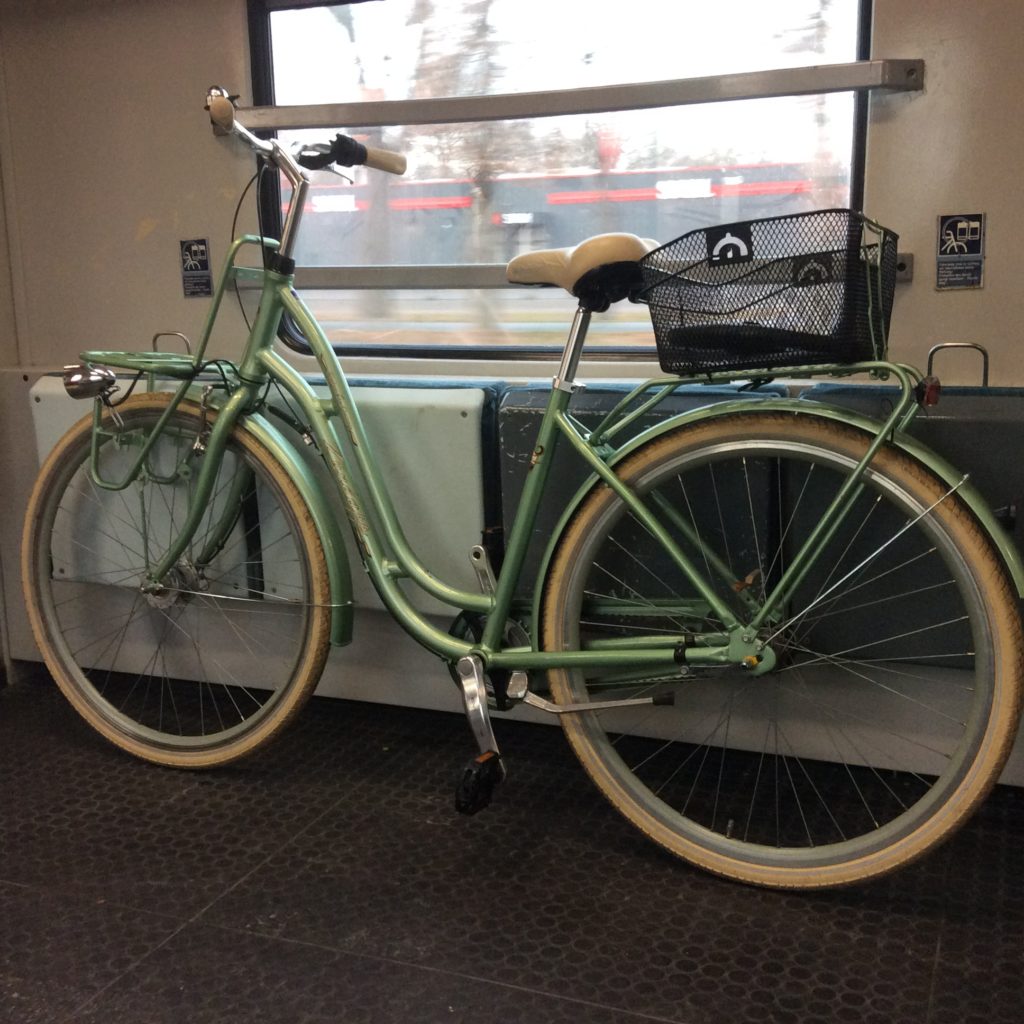 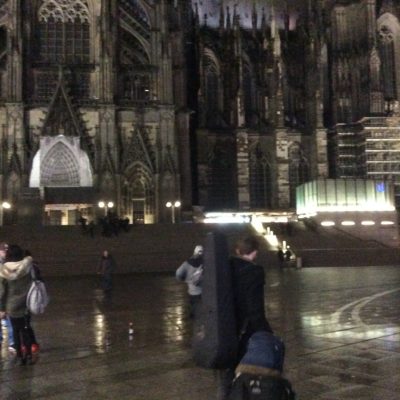 Outside the Dom in Cologne very early this morning.

Train from Cologne to Wesel 7.47am

I’ve been touring with Bruce Springsteen. Did I mention that? Yeah, on this, carrying my own equipment on the early morning train, sleeping at friends’ houses, DIY tour, the boss has the ears chewed off me. That is to say, I’ve been listening to ‘Born to Run’, the audiobook, narrated by the man himself. He’s good company alright.

As he was saying to Bono in Dalkey, he met me outside the Path Cafe a few years ago. I haven’t got to that part of the book yet.

I go on tour as much to gather stories as to share the ones I’ve gathered. John Collins has stories of a war of independence safe house in West Cork. Greyhounds. Free range cows grazing on the bylanes. Christy Moore phoning his Grandmother looking for lyrics. All told with near constant backgound hum of the barges passing up and down the river Rhine.

Rheinterassen Rhein is one of my safe houses. I slept, I ate, I drank and yes, I also sang.

The gig was nice, many familiar faces from over the years of playing in Germany. People I met in Mehrhoog, Haldern, Rees and New York.

On from Rees to Bonn. The Bonn gig was at an Irish bar. Irish bar gigs make me nervous. They can be hideous waste of time and energy. The Fiddlers is up there with Mulligans in Amsterdam, O’Ceallaigh in Groningen and the Irish Haven in Brooklyn as a notable exception. The building itself is beautiful, all brick and wooden beams on the interior. It was built in the 1300s. I arrived extremely early for the gig knocked on the window and was greeted with a “How are ya lovie?” from the friendliest voice a wanderer could hope to here. Veronica, like her sister Maggie the booker, is Ecuadorian/ British. Together with Brian ( their brother?) they run an Irish bar in Germany. They are like the UN. Except they get shit done. The warmth of their welcome and their attendance to the comfort of this musician is not something I will quickly forget. Some of the punters were a bit loud but I also met a lovely artist from Belfast named Shay,”If you got rid of the glasses and got your self an affro you could be Luke Kelly”, a very nice guy from Costa Rica “My friend come sit at our table”, a young woman from Bangkok “ I can tell you have been to Asia”. I also met a young man from Texas who is studying in Bonn because it is cheaper for him to live and study there than to pay tuition in US. He pays 350 euro a semester to study in Bonn. 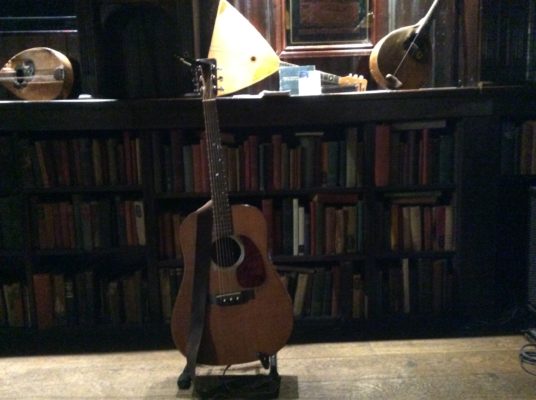 My friends Mel and Ulf came. Ulf ran the sound. Their company providing me yet another safe haven. My friend Lena came too and brought be a very fun and thoughtful gift ‘How to be German.’ It will help with banter for future German tours.

Before the gig I had a little wander around the nearby streets. Ate a supermarket banana and had a coffee at a place callled Brews Lee. I see what they did there. In the cafe I read a magazine article in my faltering/ faltered German. An article about a violinist who had her vioiin stolen on a train. I wish I hadn’t read that article. It is the reason I am typing and not sleeping right now on this train.

Afterwards Ulf drove us back to their place and I fell in to my third 12 hour slumber of this tour. I can’t tell if I am a little sick of just grasping at whatever sleep I can. I must factor in the fact that in the last week I have been from New York to Boston and back, flown to Ireland, to Germany and done quite a bit of singing. I’m allowed to be tired.

Last night I played at Mel and Ulf’s house concert. Good god, they are good people. And they attract good people. Micha and Guido, two of my Chimney Sweep friends, came by early. I’ve played both of there houses previously and they came to Cork to see me play in April. When he got home from that trip Micha bought a guitar. Before the gig I gave him a quick lesson. His bright eyed enthusiasm for learning the guitar renewed my appreciation for the instrument.

Guido told me that “Open your Eyes” made him appreciate, “ my health, my wife, my job, my good life.” Even if nobody ever reacts to that song again, it has in a sense already done its job.. 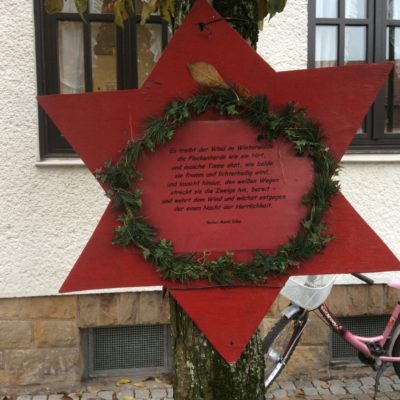 Rilke on the Street

The Complicity of Silence

In Germany I have met much questioning and very, very serious concern with America’s recent election. Perhaps you heard about it? I have an uncle in Zambia. He is a priest. I wrote to him in distress after the elections. Amongst his advice was “God gave us two ears and one tongue.” I can learn more by listening than talking. And still I talk so much, says you. I need to listen. And then speak. I do believe that. I also believe silence is no longer an option. The Big City Folk song challenge word this month is ‘Speak’. With the widespread rise of the Right and the increasing divisions in US and worldwide, I’ve been thinking a lot about feeling torn. Torn by my inclination to be polite, to not cause a scene, to avoid conflict and history’s lessons about the complicity of silence.

I have often thought of modern Germany as a great example of the possibilities of future peace in other places. Its history of course also reminds us of how quickly a society can collapse into the unthinkable. Call me naieve but I really deeply feel saddened by this election. That misogynistic, racist and hateful “post – truth”  speech has become acceptable literally sickens me. I feel like a child might after witnessing their father beating their mother for the first time. Their home is no longer the same. A darkness has been revealed. Though there may be moments of light, that darkness can never be forgotten. 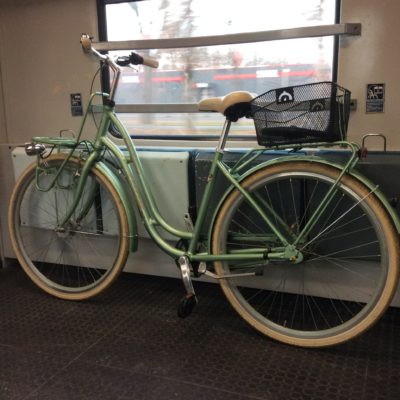 3.06pm Train from Wesel to Cologne

The guy who bought Manhattan from the Native Americans came from Wesel. 1950s architecture means it had the hell bombed out of it during the war. There are model donkeys everywhere. I’m not fully sure why.

This morning’s concert was lovely. A breakfast concert. I’m booked back here on February 18th. I am painfully tired.
I have another gig in Stuttgart tonight.