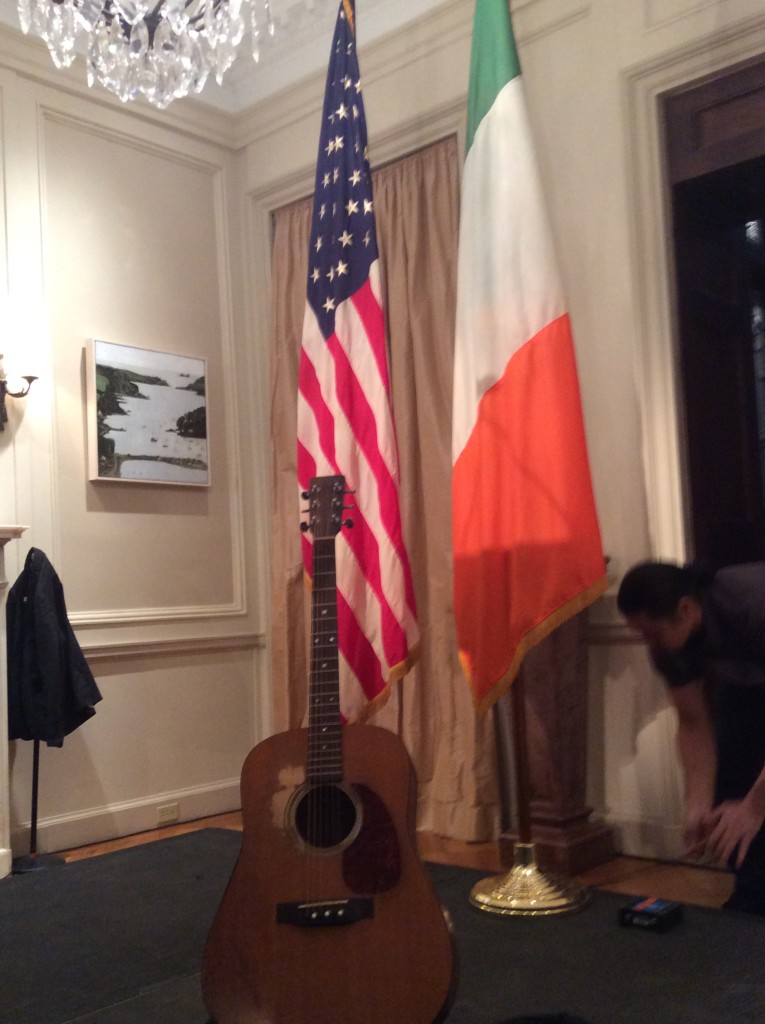 Tuesday April 12th, 2016, Back in NYC, On the 4 Train
Well, here I am back in New York City, settling into my sleepy week of recovery. A few hours ago, I was wondering whether I should keep this blog going through the non tour part of my life. Are people going to have any interest in my silent fury at the woman in front of me at Chase bank counter. Speaking loudly on her phone talking about tiles and checks for $100,000. Or the delicious Beet burgers that myself and Clare made last night. Yes, beet not beef burgers. Or how nice it is to be back in my own bed. How my mind is suppressing the urge to book more gigs. How I went back to the gym today and surprisingly hadn’t put on tour weight or felt like dying afterwards. Surely all of these fascinating tales are enough to hold your interest?
And then whilst eating delicious, duty free, irish smoked salmon and brown bread and listening to the BBC world news, I got an email from Aidan at the Irish Arts Center which read: “Please call me as soon as you can.”
After some humming and hawing, I am on a train to the American Irish Historical Centre. To play for the masses as they await Bill Clinton. He is campaigning on behalf of Hillary Clinton. I was very hesitant to say yes to this. Partly because I am more of Bernie man. Partly because this election is so divisive. Partly because I don’t have a vote here. And partly because I suspect it will be a shit show, with me playing through a suspect sound system to wealthy people’s backs.
But it will surely make today’s post a little more interesting?
Stay Out Of the News.
My instructions from Aidan are pretty clear, if not tempting, “Just stay out of the news..”
I am fairly skilled at that I silently think.
Last year I met Enda Kenny at a similar event at Irish consulate and he pretended he knew I was and told me, “You are doing great work Niall”. I swallowed all my responses.
Sometime later.
I just opened for Bill Clinton. He was late. My 45 minute set was an hour and 40 minutes long.
The chandeliers alone were no doubt worth more than I have earned in my life. I stood behind the podium in front of our flags. I joked, well, not joked, there’s a lot of my songs you probably don’t want to hear today. All the while thinking I was a t home in my pajamas a couple of hours ago. I finished up my one hour set by saying, “Thanks for coming to my gig.” “Go raibh maith agaibh, Slán.”
Where’s me Jumper…and me bag and coat?
My bags and coat had been moved while I was playing. Looking for them afterwards, I stepped into a room full of politicians. I was efficiently and politely,  lead by the elbow, to a pile of bags by the secret service. A pile of other people’s bags. Not my bag though. And now I was stuck. Between the secret service, President Clinton and my bag.
Back to the bears from previous blogs, in this moment,  I started thinking how about black bears are harmless unless you come between them and their cubs.
Myself, some of the office staff and the sound guys waited in the corner while President Clinton emerged from the back room all smiles and handshakes with other silver haired white men. I never knew that politicians retain the highest title they held after office. I feel like,  once the guy sharing a gig with you turns up an hour and half late, you get to call them by their first name, right? Right, so anyway, Bill went back upstairs, I followed after what I considered sufficient time not to startle the secret service, and finally found my behind an open door, between it and a wall. They are good at the secrets alright. Then myself and my baggage snuck out another stairwell, out the gap, into the sunshine on 81st and 5th avenue.
I walked away from Central Park towards 85th St. Subway and took the 6 train to Union quare. ( One swipe, thank you!). It was crowded, people were cranky,beautiful, ugly, wired, tired, weird, unapologetically pushy and alive. In this more familiar organised chaos, I felt more comfortable. I was two and half hours early for Caffe Vivaldi Song Club. It was not enough time to go home and come back in again, I killed an hour at The Strand Book store, I bought an Annie Proulx book of short stories, ‘Fine Just the Way It Is’,  and Erik Larson’s ‘In the Garden Of Beasts’.  Now sitting in the sun in Washington Square Park watching the street performers. Dancers, guitar players, chalk poets and flute players. After a while typing, I looked up and realized some of the music I had been enjoying was coming from my friend Rachel Gavaletz.
It occurs to me, I only got out of bed 12 hours ago.
Wednesday Morning, April 13th, Stay Out Of the News – FAIL
It would seem I failed to stay out of the news. I am told I can be seen and heard on Irish national Television and Radio news this morning.
RTE Radio News Report on Event
RTE TV NEWS REPORT – Approx 15min mark
Bernie, You Know Where to Find Me
Bernie Sanders,  if you need a singer, you know where to find me.