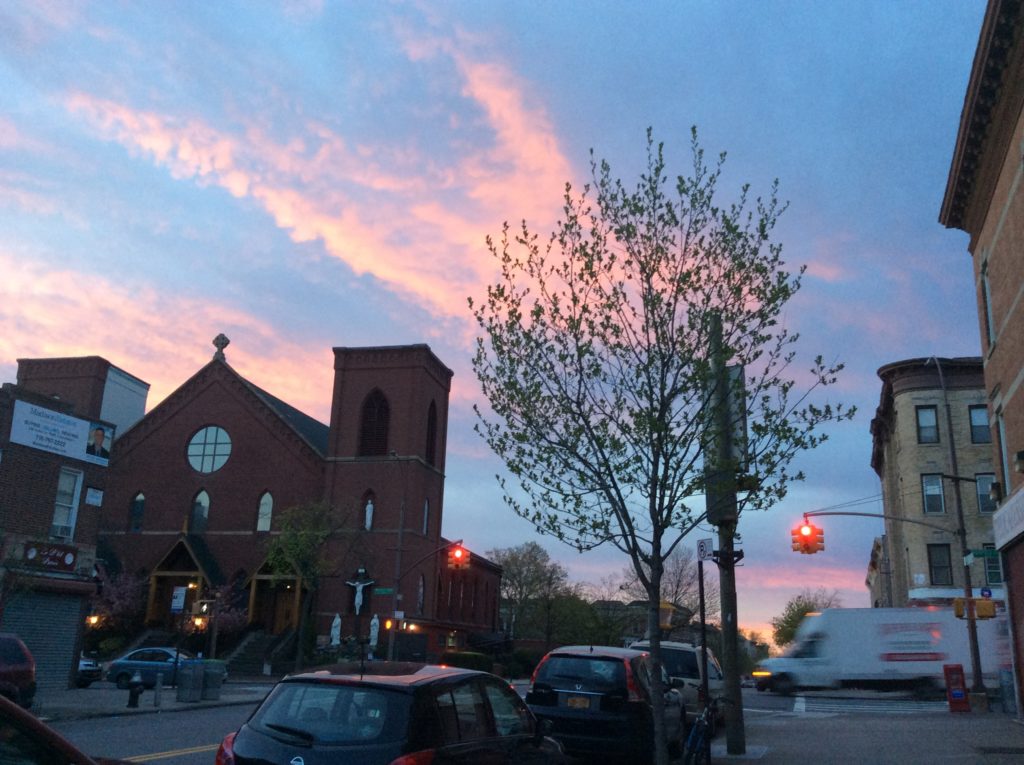 11 years old Patrick took his cousin’s dog for a walk.  Too loose on a faraway leash, the dog got hit by an oil truck on a country road. Devastated, 11 years old Patrick dragged its body down the road, still on the leash and threw it behind a wall.  Eight tear drenched hours later his cousins called round, “Have you seen our dog?”, “He’s behind the wall.”

Jesus. My friend Patrick in his mid- thirties, now, told me that one last night.

Boston. Great gig. The bus up was a fucking joke. The 1pm bus was still in Manhattan traffic at 2.45pm. The way back was a dream. I slept nearly all the way. I got home shortly after 6am.

The sun has no respect or consideration for what time Obscure Musician No. 32,124 got to bed. By now I know this. I sleep with an eye mask on my forehead ready to pull down when the cruel light of day comes a burning my eyelids taunting me with alternatives to sleep.

Like my mother before me, I rely on my ears more than my eyes, and so, I don’t use earplugs, and so, and so, despite my blackout eye mask, the voices of the street are unforgiving and victorious. They encroach upon me. My dreams try to coopt them. They try and fail. The street at first prods me, like the subtle urge to piss, then like a missing blanket and finally like an airport hotel wake up call.

First it is just voices. My neighbor Hector has a voice that can effortlessly make its way from one side of the block to another. Saving him the effort of walking to other side of the street. Hector doesn’t live in our building he lives four doors down. Yet, his is an expected racket, a familiar barrage of neighbourly cajoling and mild friendly abuse. Its familiarity making it somewhat easier to coopt.

Sunday’s aural assault from the street was also accompanied by the blaring of shit pop hip- hop music.

I felt like I was inside a Law and Order interpretation of a techno warehouse rave. A Sunday morning coming down club. Industrial machinery and all the lyricism of Dutch construction worker clearing his throat to spit on a syphilitic pigeon.

Bad enough to get out of bed.

I walked out to find the source of the cacophony. Weighing my options. Thinking about bartering for silence. Can you please? Would you please? Motherfucker please? The muzac was coming not as I assumed from a car parked in my ear drum, but somewhere inside a building across the street and several doors down from us.

Partly for fear of getting in a fight. Partly for fear of falling out with someone who sees where we park our car. Partly out of acute awareness that I am not a citizen and arguments should be avoided. Mostly cos I wasn’t sure which buzzer to buzz. I stood the stoop. Looked angrily at the 8 buzzers. Looked vacantly at the outside of the building and walked back across the road and home.

In the back end of the apartment I closed the door to the bed room the door to the kitchen I turned on the radio and I made some bread. The music persisted for hours. I became claustrophobic and irritable.

The feeling stayed and I knew I needed to get out. I went for a walk. Maybe I should have a beer? Farrell’s? A dark and dreary Irish bar in our neighbourhood. I think I was only ever there once before. I stopped in for one. Like, it’s never one. But it could have been one. In Farrell’s a cop named Daniel sees me eyeing the music poster. A cover band. $40 at the church hall. “These guys are good not a bunch of fellas playing in their garage”. I need one pint and a half hour out of the house. Daniel is chatting. In the classic bar fly way. Not once looking in my direction. Not truly acknowledging I am even there. Neither friendly nor unfriendly. Sipping slowly. “ I am one hundred per cent Irish, I don’t want to check ancestry dot com in case I am wrong.”  The second time he says this he adds, “I don’t wanna find out I am two percent Ivory Coast.” Nope. Not letting that go. “It is the same flag, who cares Daniel?” I say it smiling but with determination.  Rob, a younger bearded guy in shorts and sandals tells him, “You have the black hair Danny, I’d say you have a bit of the Moorish blood in you.” That line of conversation is shut down.

In the other side of the bar a guy in his 50s in a Bangkok T-shirt, with his sunglass on the back of his bleached blonde head is scolding his friend for wearing sandals with chinos. To which Rob interrupts “The guy with the bleached hair is giving style council?” After another brief tense pause there are cheers and hugs and drinks being sent Rob’s way.

Farrell’s, it turns out, is a fine place for some random eavesdropping.

“That’s Vinnie.”, says Daniel, pointing at the framed photograph behind the bar. He was a bartender here. Fireman. Killed in 911. Yeah, they named the street after him.”

“What do you do yourself Daniel?”

And now Daniel has bought me a Guinness. My inner rascal wants to ( but of course doesn’t)  ask the bar if they have the Nigerian bottled Guinness in stock.

The bartender opens the ice machine and breaks the ice with a baseball bat.

“What’s with the Styrofoam cups?” ” Well back, before bodegas this was the to go cup. The original growler.“

“Thanks for the pint Daniel, I’ll have to get you back the next time.” “That way you’ll have to come back again.“

I walked back home.

I saw the sirens flashing silently from two blocks away. I saw the cars double parked behind the sirens from a block and half away.

I saw at least a dozen cops standing around outside a house. The house I’d stood outside. Looking at the buzzers. I asked a younger couple hovering if they knew what was going on.

“Girl in the basement threatening to kill herself”

I went back to my kitchen. Quiet now and smelling of bread. I sat there and hoped my neighbour wasn’t dying.

Later I heard a scream and the sound of an ambulance moving on. I don’t know what it means.

We are all constantly experiencing different aspects of life’s kindnesses and cruelties. The golden rule of city living: Mind Your Own Business. Yet maybe it is important to  break that rule sometimes. To be unafraid of a minor social faux pas. Maybe sometimes pressing a buzzer and asking someone to be quiet is more important than ignoring their siren.