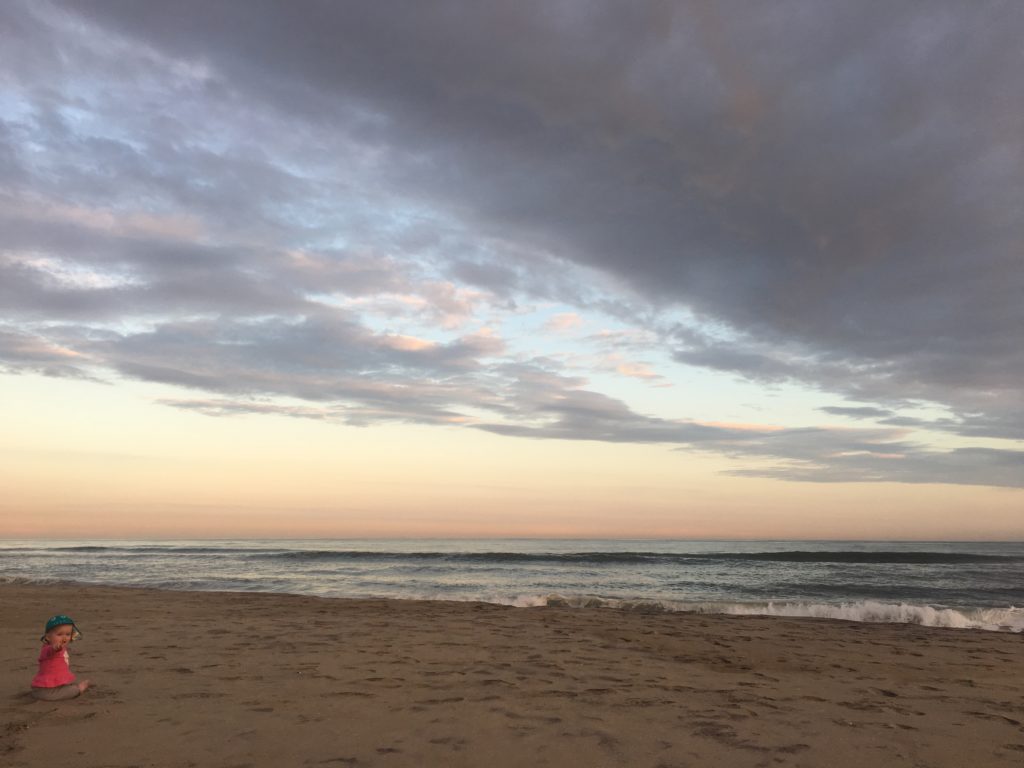 Remember when I used to write regular tour blogs? Well, I’m going to try to get back to that, here’s lesson 6,712 of New York City teaching me to be grateful.

We moved to Rockaway in April. We have a brighter, lead paint free apartment, a kitchen I can turn around in and an ocean view. I do not miss my old landlord and his condescension towards my chosen profession.   Saoirse and I can play in sand, we can find seashells, driftwood, flotsam and bud light and twisted tea empties. Out on the peninsula. The edge of America. The end of the line. I have seen dolphins at sunrise just a few hours after I have felt the dampness of another human’s  piss at my feet on the shuttle train. Today, I saw a seagull eating a baby shark. A good lesson. Most of us are afraid of the wrong things.

The news grows stranger by the day. I fight to stop the weariness and the cynicism from seeping through my pores.

We had lunch with a friend yesterday who had the following quote on the inside of her front door.

The Four Gates of Speech:

An old Sufi tradition advises us to speak only after our words have managed to pass through four gates.

At the first gate, we ask ourselves, “Are these words true?” If so, we let them pass on; if not, back they go.

At the second gate we ask; “Are they necessary?”

If the answer to any of these is no, then what you are about to say should be left unsaid.

I feel like it might be helpful to apply this filter to what I hear and say.

Rockaway is, as far I know, the only train line destination on the entire MTA system that is prefaced by the adjective  ‘Far’. Like, it’s rubbing it in. I take the A to Far Rockaway and when it gets to the very end of the line I wait for a shuttle train. Which is just a name for regular train that comes whenever the hell it feels like it. Or sometimes the Q to the F to the Q53. Or sometimes the Q to the 2 to Q35. Or sometimes if the algorithms and the sleep deprivation are on my side, I treat myself to a car service. No two trips the same.

This past Wednesday night, on my way home from Big City Folk Song Club, I took the q from 86th street in Manhattan to the 2 train at Atlantic avenue. I took the 2 to the end of the line at Flatbush Avenue to transfer to the Q35 bus which brings me four blocks from my house. I got off the train to the crushing sight of the Q35 pulling off into the distance.

( Fun fact: My in laws and most long time Rockaway residents, refer to Q35 as the green bus. The q 35 is a white bus with a blue stripe, but it used to be green. Every day’s a school day and life is crossword puzzle. )

Somewhat defeated and completely exhausted as the site of the green bus pulling off into the night, I checked my new fancy VIA app and it offered very reasonable price to get me home much faster than the bus.

He was surprised  I knew where Eritrea was, I told him, ” I listen to too much news. It can’t have been easy to get from there to here?” He begins to tell me his story. Suddenly, my self pity at missing the Q35 becomes infinitely ridiculous.

The Driver, M., all the while, smiling, tells me how he crossed the Sahara desert to escape compulsory military service. He made it to Libya and worked any job he could find for two years. It took him two years to save $1,000 to pay a smuggler to bring him across the Mediterranean to Italy. He worked for two years saving all he could and then the money was robbed just before the journey and he had to do it all again. He worked for four years to pay a smuggler to bring from Libya to Italy where he was not wanted. From there he went to Germany and Norway and finally New York. Where I met him driving a VIA car at 1:41am on Flatbush avenue.

He got me home an hour earlier than the next green, white and blue bus would have.

We are afraid of the wrong things.